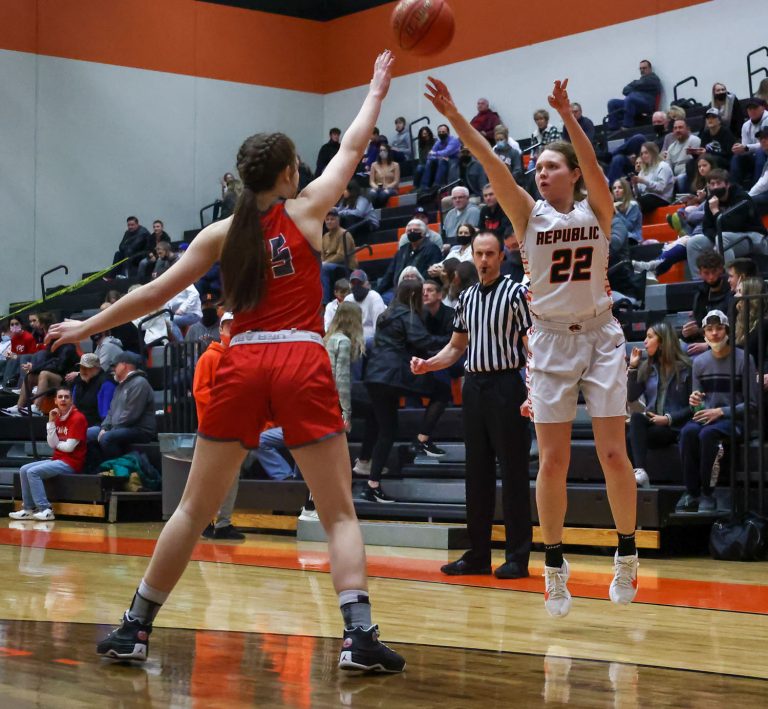 Lady Tigers’ senior Savana Powell-Goodman took over at the end of the game in Thursday’s big win over Nixa.

Facing a 16 point deficit in the second half, Powell-Goodman said that coach Kris Flood’s message to the team was that they were fully capable of getting back into the game.

The Lady Tigers slowly started to crawl their way back into a game that Nixa had had full control of throughout the first half. They kept chipping away at the Nixa lead, and, with less than a minute on the clock, they found themselves down by just three points.

That’s when senior Kaitlyn Ragsdale drove to the basket and kicked the ball to Powell-Goodman behind the three-point line. It was a move that both girls felt comfortable with.

“I feel like that’s one of mine and Kaitlyn’s things that we have. She drives and kicks it out, or I drive and kick it out to her. It’s kind of one of our things, and it helped us today.”

Powell-Goodman found herself open behind the arc, but with the Lady Eagles’ defense closing in on her.

“I felt a little bit contested… But I was just thinking, ‘Just shoot it, Savana.'”

She shot it and buried a three to tie the game with less than 30 seconds to go.

The Lady Tigers got a stop on the next Nixa possession, and sophomore Kaemyn Bekemeier gave Republic a two-point lead after knocking down two free throws with 4 seconds left. But that proved to be too much time as Nixa shot a layup the other way to send the game into overtime, the second overtime game between Republic and Nixa this season.

Nixa seemed to have all of the momentum going into overtime after hitting the buzzer-beater at the end of regulation. But before they could capitalize on it, Savana Powell-Goodman hit another three at the beginning of OT.

“I think it got us going. Our fire picked up a little bit, and it helped us throughout the rest of the game and overtime.”

She followed it up with a steal, two and-one layups, and a free throw to effectively finish off Nixa for the second time this season.

Powell-Goodman scored 20 points on the night, 15 of those coming in the 4th quarter and overtime, multiple steals down the stretch, and she scored the first 8 points in overtime for the Lady Tigers, more than every Lady Eagle combined, and Republic went on to win 82-69. She also had 9 points in Friday’s win over Webb City.

For Savana, Thursday’s game was definitely one to remember.

Who’s Hot? is our regular look at the teams and individuals who are riding hot streaks in Republic athletics.