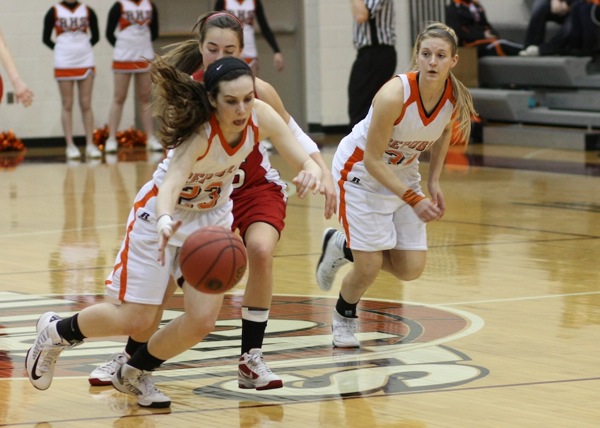 Despite a one-loss regular season and a #1 seed in the district tournament, the Republic Lady Tigers started defense of their state championship like a team with something to prove. The Lady Tigers bolted to an early lead and never looked back in a dominating 71-26 win over Reeds Spring in the district semifinals at Rogersville.

“They’ve been focused ever since the last week,” says coach Kris Flood. “We’ve had some really good practices. It seemed like today, even being out of school. We had a little shoot-around. I really think they’re ready to go.”

Flood says being dropped behind West Plains in the statewide Class 4 poll, and being picked as an upset victim in a recent media coverage, has motivated the Lady Tigers.

“I won’t say it’s not in the back of their minds,” Flood says. “They’ve definitely got a little chip. We talked about it and it’s just one of those situations, I don’t know what else we can do. We’ve played the schedule we’ve played, and not to take anything away from West Plains, but the kids feel like they’re gonna go out and give it their best shot and try to defend their title — at least defend their district title.”

Heinzler had 12 points in the 1st quarter and 17 for the game, despite sitting out most of the 2nd half. No other Lady Tigers were in double figures, but everyone on the team scored. Tori Taylor had eight points, and Sarah Kreul had seven. Alex Botkin, Kayla Bartelsmeyer, Micah Mansker, and Michayla Shanks had six apiece. Lindsey Carlson and Bailey Cornelison had four points each. Jade Sawyer had three, and Rachel Allen and Katherine Hankins scored two.

The lone dark spot for the Lady Tigers was an injury suffered to point guard Alex Botkin, who left the game in the 2nd quarter after she hit the back of her head on the floor while trying to take a charge. Her status for Friday is uncertain.

Republic advances to play the winner of West Plains/Rogersville. West Plains led Rogersville at halftime of the second semifinal 17-4. The Lady Zizzers are ranked #2 in the state, and Republic is currently #3.