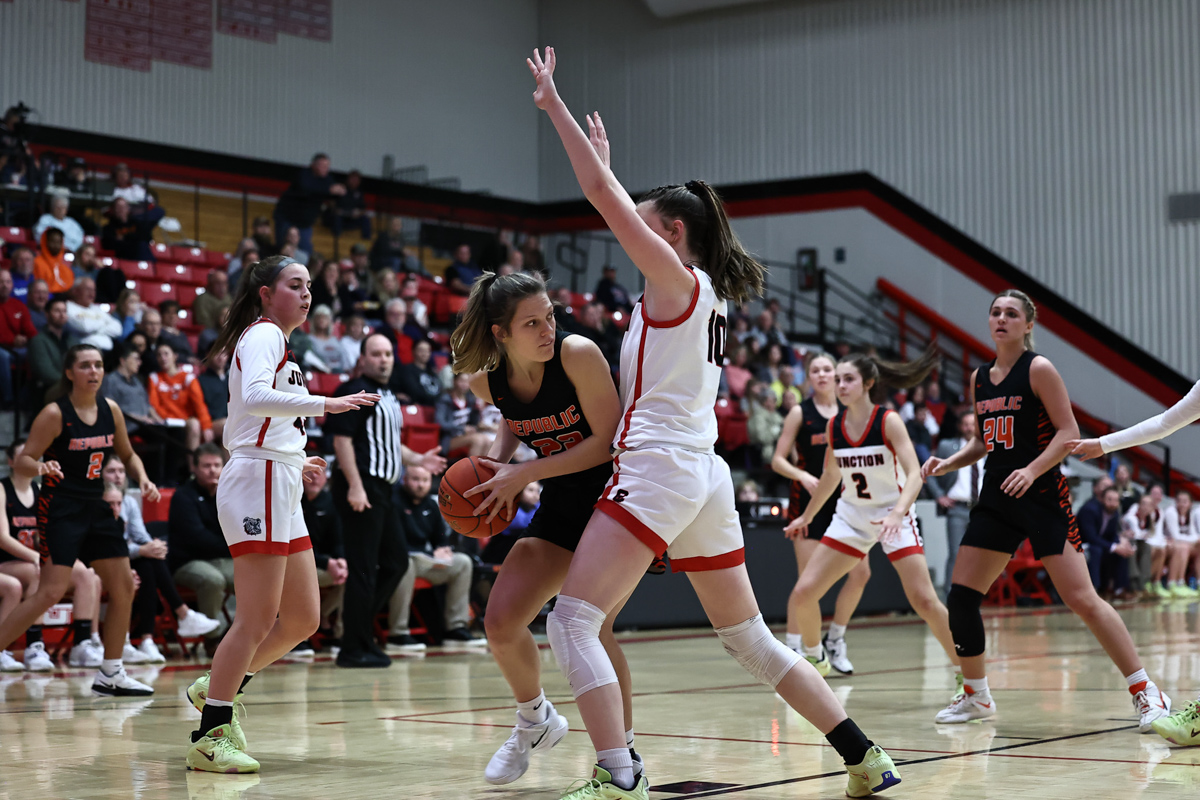 Alaina Norman had 14 points for Republic, including 10 in the first half. (File photo by Steve Rackley)

Republic capitalized on two standout stretches of defense, outscoring West Plains 13-0 over several minutes in the first half, then 16-0 over several minutes in the second half. The result was a blowout win, 54-30, over the Lady Zizzers, ranked #2 in Missouri Class 5. Republic allowed just 12 points in the second half to open the Nixa Invitational Tournament with a win.

“As far as team defense, I thought if that’s not our best game this year, it’s up there,” said coach Kris Flood. “They followed their assignments and seemed like they were focused. We had that first two minutes, it took us a little bit to adjust, but after that I thought they did a really good job.”

During the opening minutes of the game, West Plains used sharp passing and quick cuts to dissect the Republic defense, jumping to an 8-4 lead. But Republic settled in near the midpoint of the first period and took its first lead at 11-10 with about 3:30 remaining. That sparked a 13-0 run that lasted into the second quarter, and Republic led 21-10 before the Lady Zizzers scored again. At halftime, the Lady Tigers led 27-18.

Republic dominated on the boards in the first half, and capitalized on its height advantage by feeding the ball inside. Alaina Norman finished the first half with ten points (and had 14 in the game).

The Lady Tigers stretched the lead by scoring the first six points of the second half, going ahead 33-18 before West Plains got on the board in the second half. The lead hovered in the low double digits until early in the fourth quarter. That’s when Republic went on its second big run of the game, outscoring West Plains 16-0 over a five-minute stretch to take a 54-28 lead. West Plains scored four points in the fourth quarter.

Republic’s perimeter defense, led by Molly Blades and Misora Nambara, disrupted the half-court offense of West Plains all night. After scoring off several back cuts in the first quarter, those passing lanes were closed the rest of the game.

“Molly is quicker than what people think, and she can get out and guard and disrupt,” Flood said. “We had talked about being prepared for those back cuts and getting your flap up. We really emphasized that the last couple of days. We’ve seen a couple of teams now that run similar types of offenses, and I think they have really adjusted to it.”

Offensively, Flood credited his team for its efficiency. “We made some really good decisions with the ball and found some open people. We’ve done some different things now with a zone (defense) because we’ve seen so many zones lately,” he said. “The kids have bought in with their cuts and they’re thinking a pass ahead. It’s a good win.”

Republic improves to 14-2. The Lady Tigers will play Park Hill South Thursday night in their second game of the tournament at 6:00. Republic Tiger Sports will carry the game live.