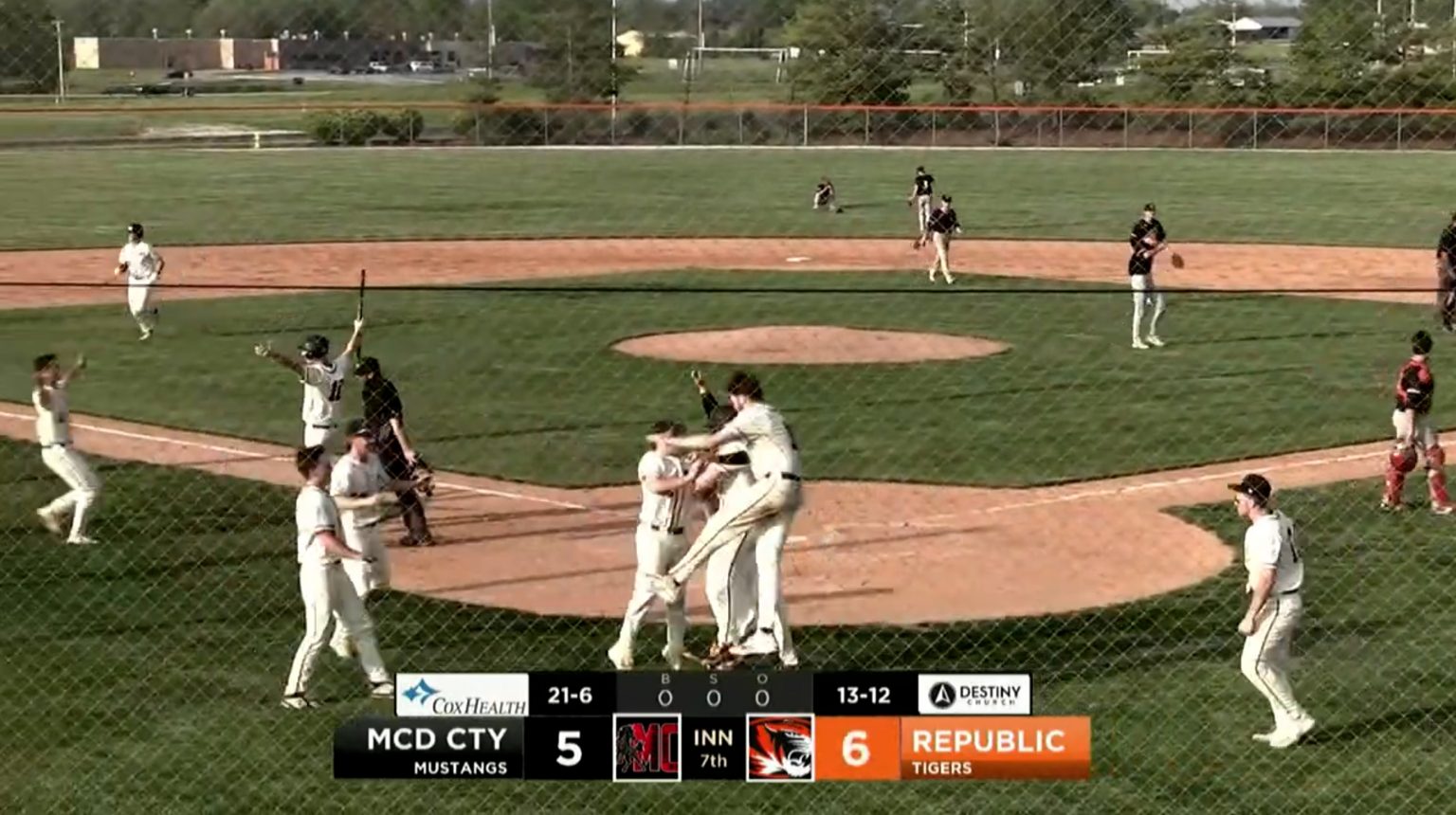 Republic celebrates after Caide White scored the winning run in the bottom of the 7th inning.

From Pick-off to Walk-Off: Tigers Win in Improbable Finish

Pinch-runner Caide White was picked off , but then he and the Tigers walked it off against McDonald County. Representing the winning run at second base in the bottom of the seventh inning, White strayed too far from the bag and would have been caught in a rundown — but the pickoff throw sailed into center field and White scampered home, giving the Tigers a 6-5 win over the Mustangs.

The wild finish capped a back-and-forth contest that saw Republic grab the lead, give it up, then claw back for the seventh-inning win. Republic out-hit McDonald County 10-9 and took advantage of three Mustang errors.

Connor Sandridge, Ace McWatters, and Trace Harrington each had two hits for the Tigers. Harrington walloped the ball to the center-field fence on two consecutive at-bats, driving in a run each time.

Both teams missed opportunities to score early. McDonald County wasted a leadoff double in the first inning, then put the first two runners on base in the second and third innings, but failed to score. Republic loaded the bases in the second inning, but couldn’t push a run across.

In the bottom of the third, Republic finally broke through. Sandridge and Gavyn Beckner singled, and after a groundout, Sandridge scored on a sacrifice fly by McWatters. Harrington tripled to the fence on the next at-bat, scoring Beckner and putting Republic ahead 2-0.

The Mustangs got to Republic starter Tyler Burks for the first time in the top of the fifth. Two singles and a walk loaded the bases. After a strikeout, McDonald County got another hit and a walk to score two runs and tie the game. Landon Carter relieved Burks with the bases loaded and walked in two runs before ending the inning. By the time the inning was over, the Mustangs led 4-2.

Republic got a run back in the bottom of the inning on another RBI hit by Harrington, making the score 4-3.

In the sixth, McDonald County scored a run off Republic reliever Drew Schroeder to increase its lead to 5-3. But with two outs and runners at the corners, a base-running mistake cost the Mustangs more runs. The runner at third hesitated on a bunt up the third base line by Colton Ruddick, then hesitated again in retreating to third when Ace McWatters made the throw to first base. The Tigers threw behind the runner to pick him off, ending the inning.

In the bottom of the sixth, Garrett Lester singled and Schroeder reached on an error, and Gunner Ellison walked to load the bases. Lester scored on a single by Sandridge, and Schroeder scored when Beckner hit into a 4-6-3 double-play. That tied the game 6-6.

In the seventh, McWatters walked to lead off the inning. Harrington reached base when McDonald County center fielder Jack Parnell misplayed a fly ball. That set up the winning play, when White scored on an errant pickoff throw.

Schroeder earned the win in relief, working two innings and allowing one run on four hits and a walk. Burks pitched 4 1/3 innings, giving up four runs on five hits. He walked six and struck out two. Carter pitched 2/3 of an inning, walking two.

The win is the second straight for Republic, which edged Sedalia Smith-Cotton 3-2 Saturday during the second game of a double-header. Republic had dropped the opener against host Glendale, 3-1. The Tigers managed just one hit against Glendale in their loss, and only four hits in the win against Smith-Cotton.

Friday night, Republic had lost an extra-innings game at Webb City. Playing as the home team because the game had been moved from Republic’s muddy field to Webb City’s turf, the Tigers tied the game in the bottom of the seventh inning before losing in the eighth, 11-6. Garrett Lester had three hits to lead Republic in that COC loss. McWatters had a hit, a walk, and three runs batted in.