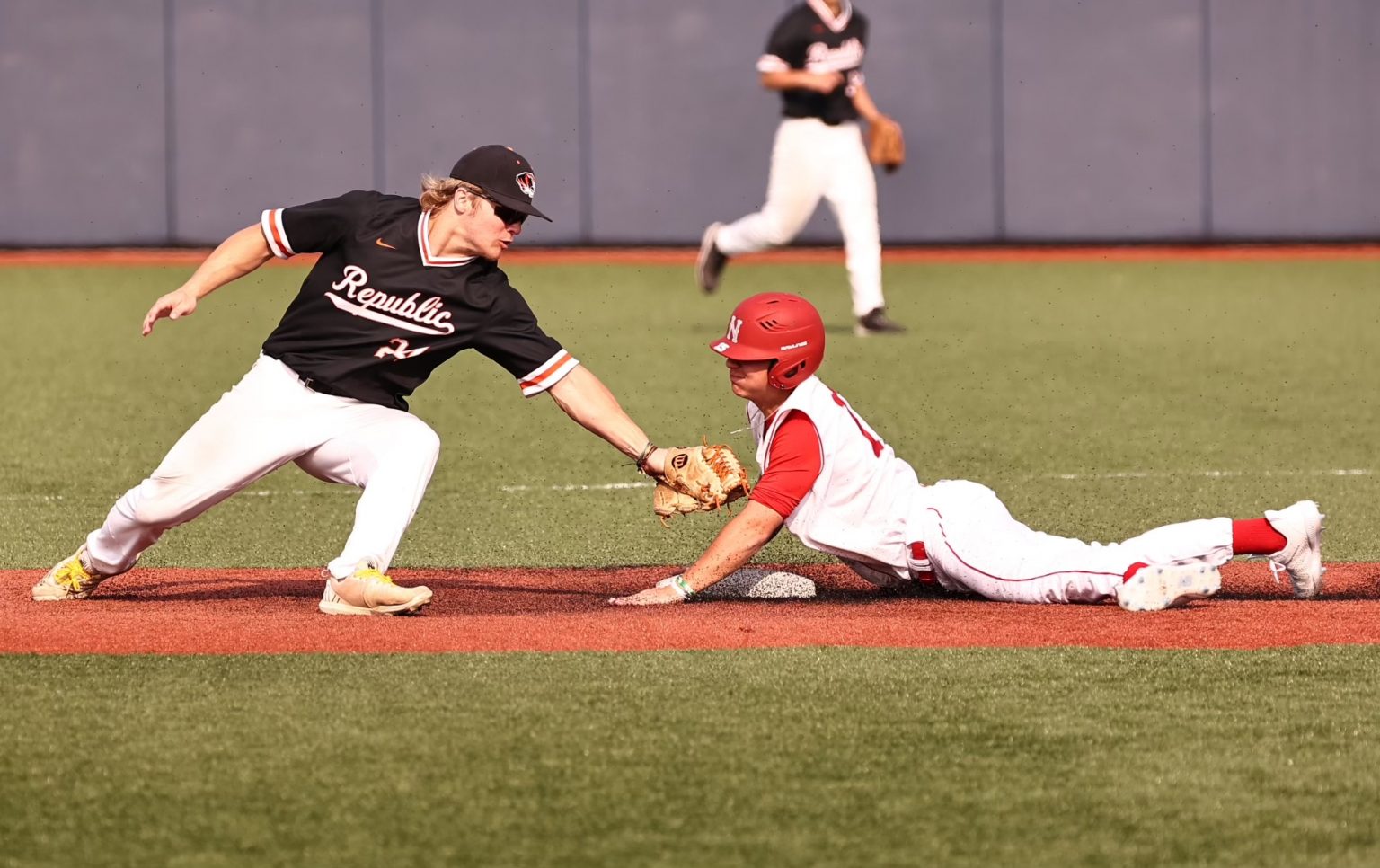 A Nixa base-runner barely beats the tag by Connor Sandridge at second base. (Photo by Steve Rackley / Flat Top Photos)

A seeing-eye single by Nixa’s Samuel Russo bounced through the infield and bounced Republic right out of the district tournament. The bases-loaded ground ball base hit drove in the winning run in the bottom of the seventh inning, giving Nixa a come-from behind walk-off win, 5-4.

Nixa had not led all day until that final at-bat. Republic jumped ahead early, ripping Eagles starter Keith Piepmeier for four runs in the top of the first inning. Connor Sandridge walked and stole second. Adam Brown walked and Ace McWatters doubled both runners home. Trace Harrington followed that up with a double to make the score 3-0, and Harrington eventually came in to score on a wild pitch, giving the Tigers a 4-0 lead.

Republic Gavyn Beckner pitched around trouble several times. It started in the bottom of the first inning when he allowed a leadoff triple to Russo but worked out of the inning without allowing a run.

Nixa got one run back on a solo home run by John Gholson in the second inning. The Eagles scored three more in the fourth inning after two were out. Russo singled home two runs, stole second, then came in to score on a double by Rylan Michel. That tied the score 4-4.

The score stayed tied until the bottom of the seventh inning, when Nixa loaded the bases against reliever Caide White. With two outs, Russo singled softly up the middle, allowing Tanner Grant to score the winning run and send Nixa into the district championship game.

Republic had just four base hits off Piepmeier, who settled down and pitched a complete game after allowing the four first-inning runs. Drew Schroeder had two hits, and McWatters and Harrington had one apiece.

Piepmeier earned the win for Nixa. White took the loss. He pitched 1 2/3 innings, allowing one run on two hits. He struck out three and walked five. Beckner pitched five innings, giving up four runs on eight hits, striking out six and walking three.

The game was the last in a Tiger uniform for five seniors: Ace McWatters, Tyler Burks, Cole Iles, Mason Brewer, and Adam Brown.

Republic ends its season with a 16-14 record. It’s the third consecutive winning season for Republic and the third straight year with at least 14 wins.