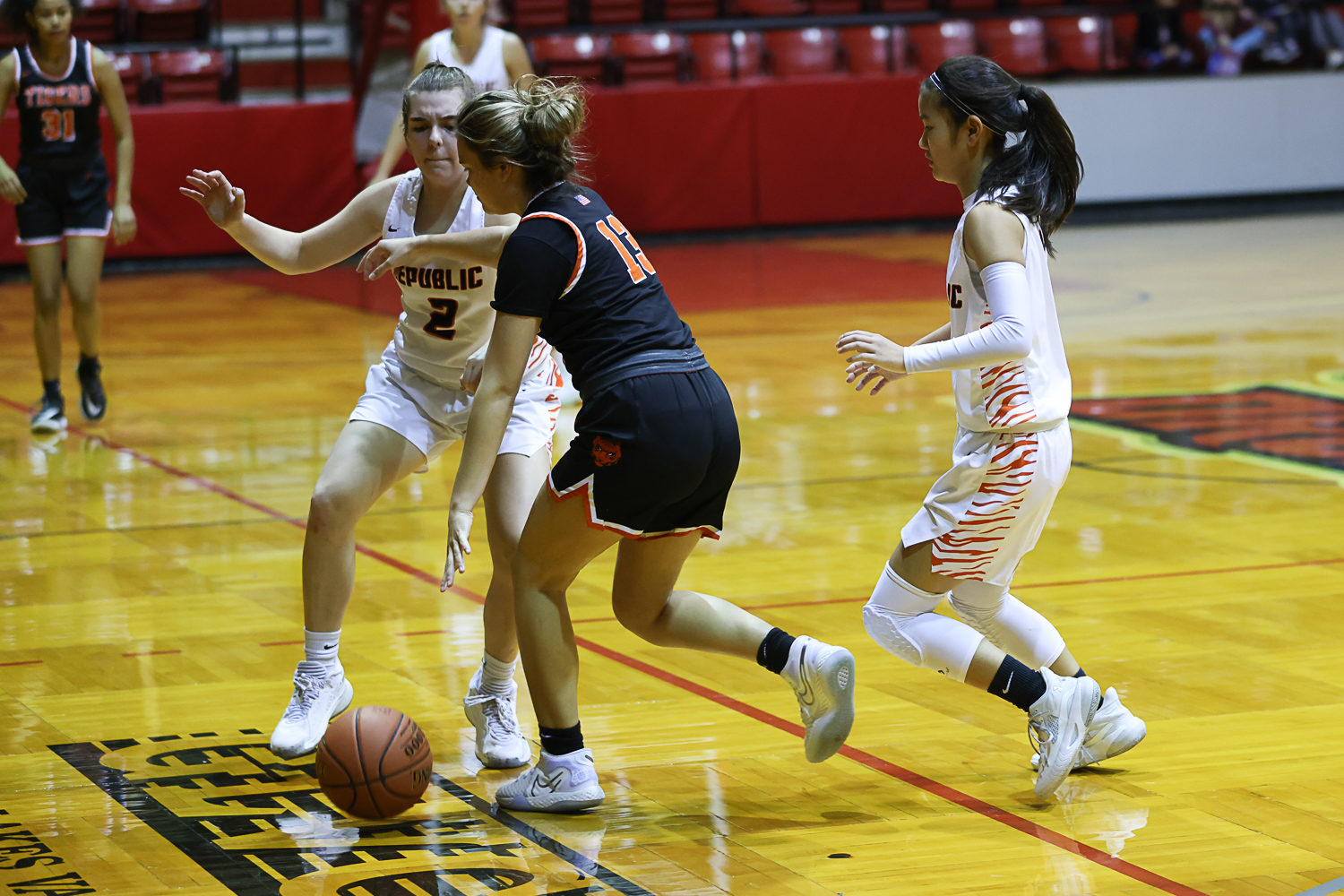 Lauren Chastain and Misora Nambara trap in the backcourt during the first half of Republic’s Pink & White win over Waynesville.

Republic’s full-court pressure defense was good, and its half-court defense was even better in a 58-21 win to open the Pink & White tournament at Weiser Gym in Springfield Monday. The Lady Tigers opened the game with a 20-4 lead, and never looked back.

Republic allowed just three field goals in the first half – none in the second quarter – and built a 32-8 lead at halftime against an underdog Waynesville team that was even more outmatched because of some player absences. Breona Hurd, the best player on Waynesville’s roster even at full strength, had to carry more of the load than usual. She scored 20 of Waynesville’s 21 points.

“I talked to their coach prior to the game starting and she said they were going to be a little short-handed with some kids out… so we kind of felt like if we can just…get off to a good start, we had a pretty good chance,” said coach Kris Flood.

Hope Schatz helped make sure that happened with hot shooting to start the game. Schatz made two quick three-pointers to rev up the offense, and everyone else got in on the act shortly after that. Republic got baskets from Schatz, Misora Nambara, Lauren Chastain, and Kaemyn Bekemeier in the first four minutes of the game. By the end of the first quarter, Republic already led by 12 points, 20-8.

“We have plenty of kids that are capable (of scoring),” Flood said. “It’s just a matter of getting that consistency. Hope’s had two or three games in a row now where she’s played really well, and started to get a lot of confidence.”

The early lead helped Flood rest his starters late in the game, which could be important if Republic keeps winning, with four potential games in a four-day stretch. The starters were on the bench for the entire fourth quarter, in addition to get extended time to rest earlier in the game.

The win improves Republic’s record to 5-2. The Lady Tigers will meet 7th-seeded Ava in the quarterfinals at O’Reilly Family Event Center Tuesday at 9:30 a.m. (We will not have live coverage of that game.)