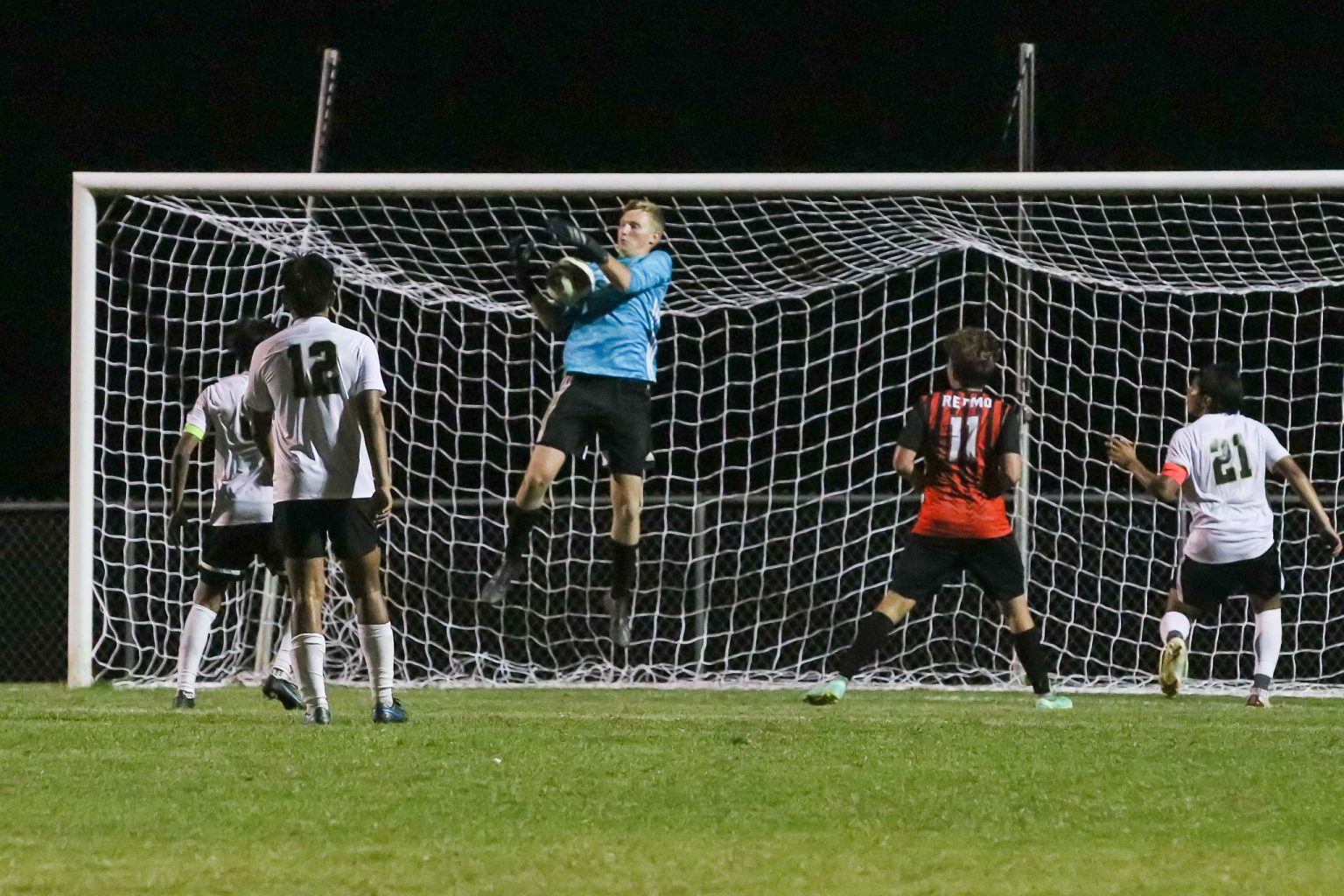 Drake Lightfoot makes his final save of the night to preserve Republic’s 1-0 victory over Neosho.

Despite a rough 2-4 start, Republic finds itself right in the thick of the Central Ozark Conference title race, thanks to a 1-0 win over Neosho at home Tuesday. Marco Donjuan booted home the game-winner with about four and a half minutes remaining to lift the Tigers past the Wildcats for the first time since 2018.

It was the defense that shined brightest in the win for Republic. The Tigers had given up three goals in four of its first six games, but Tuesday, against a high-powered offense that had hung four goals on both Nixa and Ozark this season, Republic delivered a shutout. Although Neosho got its chances, especially in the first half, goalkeeper Drake Lightfoot and the back line turned the Wildcats away.

But Hauck said the defense started further upfield Tuesday, with a solid performance in the middle.

“Neosho (is) putting up good numbers this year, and so for us to be able to come in and hold them to zero, I was just really proud of our defense. It starts with Drake, but then our midfield put it together tonight. And I think that was key defensively. Our midfield did a really nice job in front of our back four, and then Markus (Mitchell) and Ethan (Meyer) and Xavier (Ulshafer) and Tales (Schreiber) just did a nice job back there, being able to clean up behind them,” Hauck said.

The teams played to the beat of drums from the Neosho bleachers – an experience that both Lightfoot and Donjuan said they enjoyed. But Donjuan silenced the drums with his breakaway goal late in the second half.

“Honestly, (with) the emotion, I can’t remember what I did, but I just know it got to my foot. I saw a wide-open goal with just the goalie. I took a chance, and luckily, it went right into the side net to the left,” Donjuan said.

Hauck had a view of the play from the sideline, and said it was indicative of the way the Tigers played all night.

“We were doing a nice job of being able to swing it from the right side to the left side. And then we did a nice job of finding it from the left, up. And we worked on that at practice, trying to catch them and make them move laterally,” Hauck said. “We caught Marco up top, and … the ball was playing nicely to where he could cut it to his right foot, and he made a great shot on it.”

Throughout the game, Neosho pushed the ball into Republic’s territory for scoring opportunities. And every single time, the defense turned the Wildcats away. Drake Lightfoot made several fantastic saves, but the entire Tiger defense turned in a solid performance – so as a group, they are the Farr Better Players of the Game.