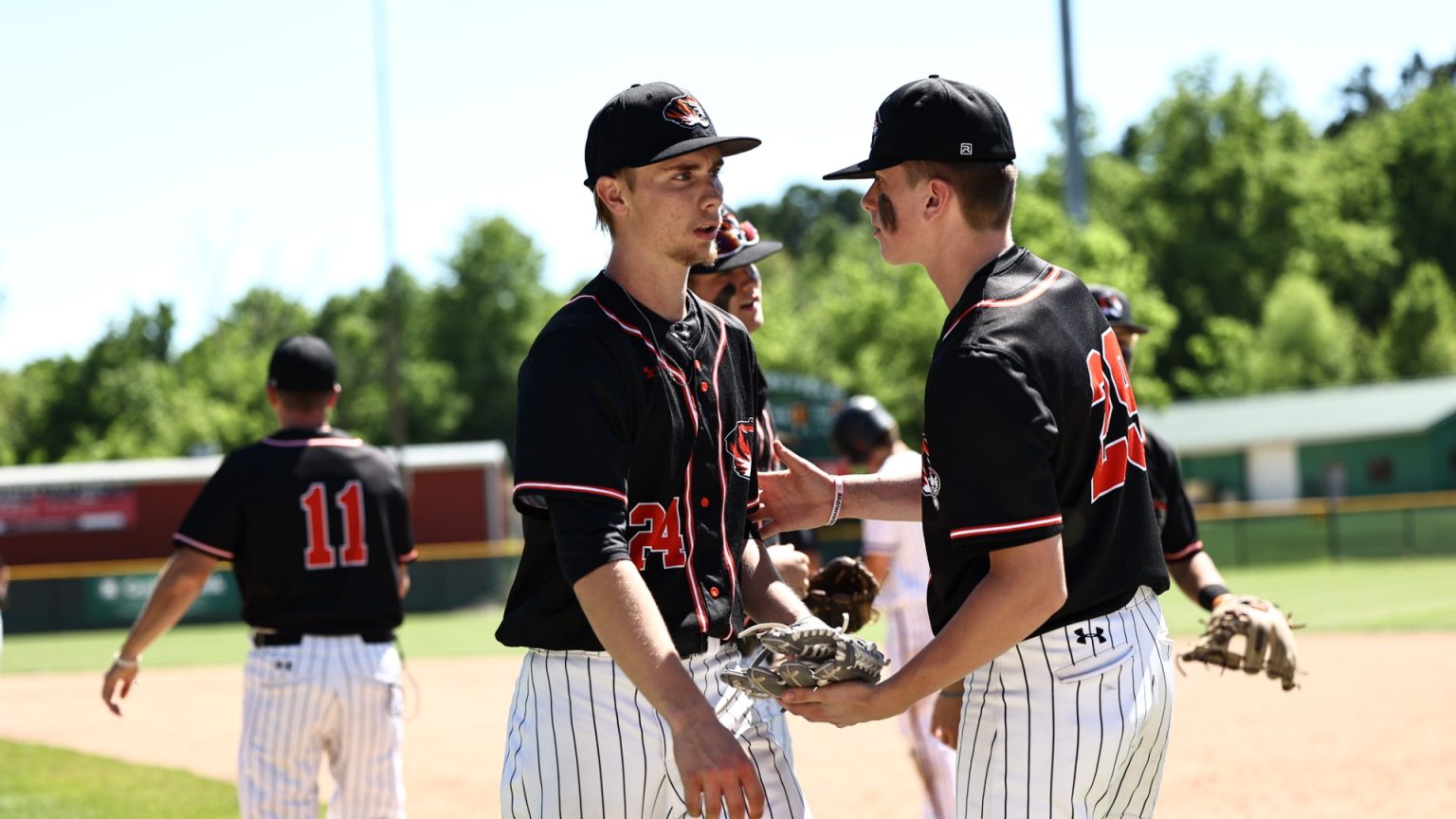 Jared Hughes returns to the dugout after retiring the Jays in the 7th inning. He pitched a complete game, allowing one run and striking out eight.

Republic’s Jared Hughes and Jefferson City’s Jacob Roettgen combined to strike out 22 batters. They allowed only five base hits between them, and both pitched compete games. So it was fitting that Jefferson City scored the game-winning run on a weakly hit ground ball that sneaked through a drawn-in infield in the top of the seventh inning, giving the Jays a 1-0 victory and a berth in the state semifinals.

It was the bottom of the order that did the damage for the Jays, playing as the visitors after a pre-game coin flip, when they finally broke through in the top of the seventh. Number five hitter Nick Williams singled to lead off and went to third on a double by Wyatt Fischer. With the infield in, Jeremy Parks grounded the ball between shortstop and third base, scoring Williams with the only run of the game. Hughes struck out two more batters to get out of further trouble.

The Tigers were unable to muster a rally in the bottom of the seventh. Kyle Hill grounded out – the throw beat him by a half-step – to lead off the inning. Hughes lined out to center, and after Usgaard was hit by a pitch, Roettgen struck out Bryce Messier to end the game.

“There’s not a lot you can say. Two guys get on the mound and go at it in a game like that, and they did, and we came out on the wrong side of it,” said coach Curt Plotner. “Sometimes, you put forward your best effort and you just come up short, and that’s kind of what happened today.”

Hughes was good from the beginning, but Roettgen was a little bit better. Jefferson City had the first scoring opportunity in the top of the first, but stranded a runner at second base. The Jays put the leadoff batter on base in the second after a strikeout and a wild pitch, but Hughes coaxed a 4-6-3 double play from Wyatt Fischer.

In the top of the fourth, Joe Hoerchler reached on an error, but two good defensive plays by center fielder Gavin Walker, including a running catch in the gap in right center field, kept the game scoreless.

Republic’s best scoring opportunity came in the bottom of the fourth inning, when Ryker Harrington led of with a double over the head of right fielder Nick Williams. But Roettgen struck out the side to strand Harrington and preserve the shutout.

Jefferson City didn’t get its first base hit until the top of the sixth. Connor Earlywine doubled and advanced to third base on a groundout. But with one out, Hughes fanned Hoerchler, Jeff City’s #3 hitter, then got Roettgen to ground out to Gavyn Beckner at third base.

In all, Roettgen struck out 14 batters. He pitched seven shutout innings and allowed two base hits, walking one, and hitting a batter.

Hughes struck out eight. He didn’t allow a base hit until the sixth inning, and allowed just three hits all day. He walked three and allowed a single run.

“They were the group that laid the foundation as freshmen … and 21 wins, a quarterfinal appearance, a conference championship, a district championship – you can say a lot of things about them, but they’re just unbelievable kids, and that’s the most important thing,” Plotner said. “We’re really going to miss them, but we’re proud we got to spend four years with them.”

Jared Hughes pitched the kind of game that would earn a permanent spot in Tiger lore if the outcome had been just a little different. Hughes was as good as he’s been all year, taking a no-hitter into the sixth inning and allowing just one run, striking out eight. Despite coming up on the short end of the decision, he’s our Farr Better Player of the Game.