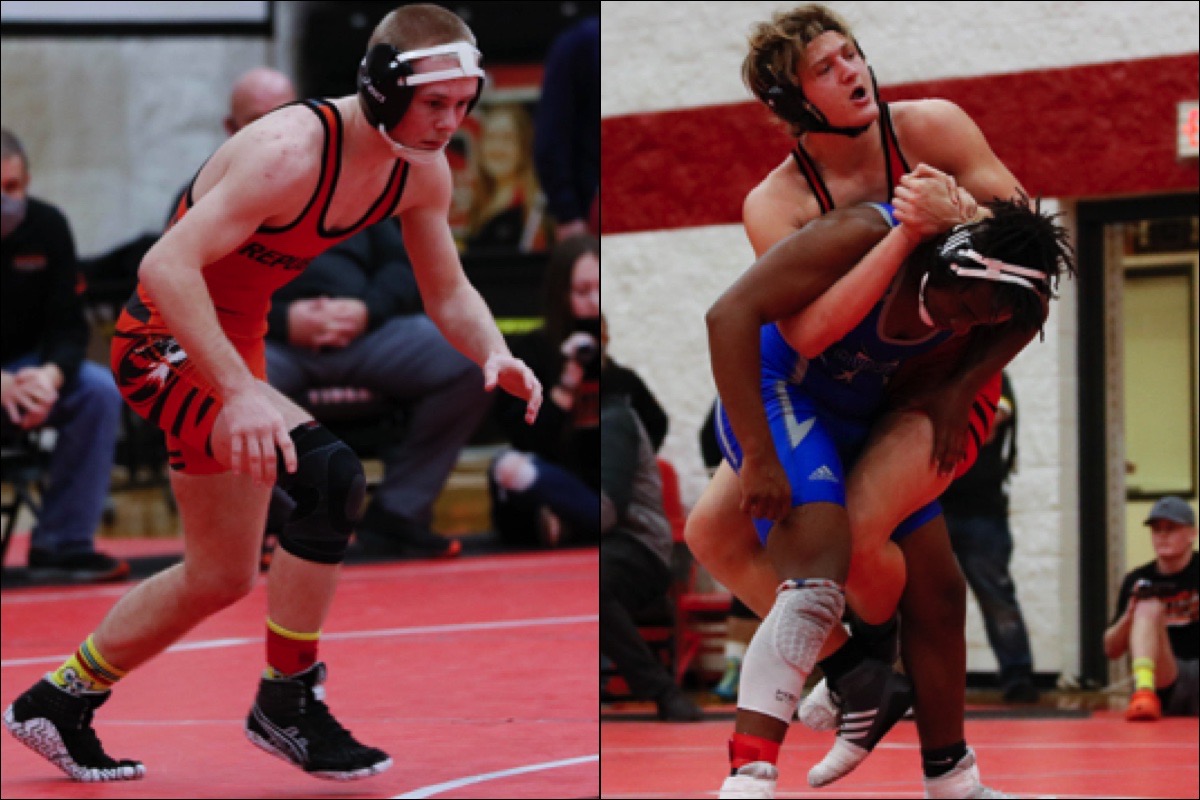 Two Republic seniors have earned spots in the state wrestling tournament in Independence.* Wyatt George finished second at sectionals in the 113-pound division, and David Honeycutt finished third in the 195-pound division. The top three finishers – one fewer than in most years, because of COVID-related restrictions – qualified for state from the tournament Saturday at Ozark.

*Correction: An earlier version of this story incorrectly reported the state tournament will be held in Columbia.

No one should take George’s second-place finish at at districts and sectionals as an indication that he’s a long shot for a state medal. George lost both times to Zan Fugitt of Nixa, who was the state runner-up last year and who has earned a national ranking on some lists.

“I think today was good. I did my job… to do what I needed to do to make state,” George said. “Then that finals match, Zan is really good. So I just kind of go out there to have fun and slowly work my way to figuring out what I can do to beat him… Hopefully, I make the finals with him, and then I come out on top this time.”

This is George’s third trip to Columbia, but this one feels different to him.

“In previous years, I told myself ‘I’ve got next year.’ Obviously, I’m a senior, so this year I don’t have that.”

Last season, the step up to Class 4-level competition caught George by surprise. Republic had previously competed in Class 3, and George had beaten many of the top wrestlers in that class. “There are going to be six or eight other guys that are just as good as or even better. I’ve just got to have the mindset… that I’ve got to wrestle every match like it’s Zan.”

David Honeycutt has wrestled since seventh grade, but took a season off last year. He has returned to become one of Republic’s most consistent wrestlers, and he came from behind in the third-place match to grab the last remaining state slot in his weight class. Honeycutt trailed in the final minute of the third round, but said he knew he had an opportunity to come back if he pressed the action against his bulkier opponent Bahshi Traylor of Capital City.

“Once you start working those really muscular guys, it starts taking a lot of oxygen out of them and they just start dying after the second period,” Honeycutt said. “I’m a little lanky so I’ve got a lot of stamina, and I just kept going.”

Traylor got hit with a couple of stalling points before Honeycutt was able to put him away. “He stayed where I wanted him. I got both legs in and put a power-half on him and just stuck him to the mat.”

Honeycutt nearly wrestled for a championship at sectionals. He lost a close semifinal to Michael Turner of Nixa that could have swung the other way on a close call, before rebounding in the third-place match.

“It feels really good,” he said of qualifying for his first state tournament. “I’ve been working for this since seventh grade and I’m just happy for myself I actually made it, finally.”

Coach Jerry Morton said it’s “rewarding to see someone that puts in the work and it pays off for them in a big match like that. To qualify for state is an accomplishment for anybody, and to do it in your… senior year, I think it’s a little bit special.”