Drew McMillin could not miss Thursday night in the first round of the Liberator Tournament in Bolivar.

What started as just the first round of a tournament, a one versus eight seed matchup, and a game for the Tigers to get back into the swing of things after not playing for two weeks turned into not just a historic night, but the greatest shooting performance the state of Missouri has ever seen.

Drew McMillin wasn’t just “hot” against Camdenton, he was on fire.

He hit two layups right after the tip and, on a great pass from Carson Neff, took a step back from the left corner to hit his first three-pointer of the night. It was the first of many.

McMillin hit one more three in the first quarter and had half of the Tigers’ twenty points. From that point on, Drew McMillin quite simply put on a show.

He hit five threes in a row in the second quarter. How he shot it and where he shot it from didn’t matter; everything he threw up went through the net Thursday night. He said that it was during that second quarter that he really knew he was feeling it.

“A shooter, whenever they make one or two, then they start to feel like they can take any shot, so after probably my fourth or fifth I felt like I could just shoot whatever I could and it would go in. From anywhere.”

His last two threes of the second quarter might have been his best of the night. With two minutes left before the break, McMillin pulled up from the volleyball line and drained his sixth three, and then twenty seconds later he hit a step-back from the top of the key that gave the Camdenton defense no chance. That was the one where he realized the Republic record for threes in a game was in reach. McMillin told the Ozarks Sports Zone that it was after number seven where he realized that he could have drop-kicked the ball and it would’ve gone in.

McMillin ended the first half with twenty-seven points and seven threes, which put him just one away from tying the Republic record. McMillin didn’t know this, however. He knew that he had hit a lot, that he had probably never shot as well as he had in that first half, but he didn’t know how many he needed for the record.

But his brother, Devon McMillin, and the rest of his teammates did.

“My brother always reminds me how many I have to get for the record so he was in my ear.” Devon told Drew and the rest of his teammates that he only needed one, and the team came together and decided they were going to do whatever they could to get #10 the ball in the second half.

“I remember at halftime they were more concerned about the record than I was. It’s pretty cool to have those guys wanting me to get the record just as much, if not more than I do. Those are my best friends out there. I mean, making shots is always fun, but being able to do it with all of my friends just makes it even more fun.”

The Tigers came out of the half and executed, they continued to run their offense in the third quarter, and with the Laker defense so focused on Drew, Dalton Parks scored two points, Devon McMillin hit a three, and Tyson Young scored eight points. But, despite the tighter defense on him, the Tigers got Drew his opportunities, setting screens and creating chances for him to shoot.

And shoot he did. Drew netted four more threes in the third, bringing his total to eleven on the game, and passing the school record for threes in a game. Next up was the Republic team record for threes in a single game. The mark was thirteen, and with twelve from the McMillin brothers, the Tigers just needed one more in the fourth to tie it.

If the Tigers still ran a version of their offense in the third quarter, then all bets were off in the fourth. The gameplan was simply to give Drew the ball.

His teammates were passing up open shots and lanes to drive and were passing McMillin the ball instead. Drew continued to knockdown every shot he took. He netted twelve, thirteen, fourteen, and fifteen all before the halfway mark in the fourth quarter. Word had started to spread that the all-time state record for threes in a game by an individual was sixteen.

“And I actually, one of the fans, I heard Les Moody in the crowd yell that I was one away from the state record, so multiple people were wanting me to break records.”

And with 2:50 left in the quarter, that’s exactly what he did. McMillin got a defensive rebound and sent the ball up to Will Fronabarger, who turned around and gave it back to Drew. Drew had to dish it back to Fronabarger, who passed up the most wide-open three he’d ever had in his life and gave it back to McMillin. McMillin sent it to Young on the left-wing and cut through the lane. Carson Neff set an off-the-ball screen for Drew in the left corner, Young found him, and Drew McMillin hit his sixteenth and final three of the game to set the state record. The shot also broke the Tigers’ single-game scoring record, which was 56 before Thursday night.

He finished the game with 61. McMillin went 5/5 from the free-throw line, 4/4 on field goals, and an astonishing 16/18 from beyond the arc. A player has hit sixteen threes in a game two other times in Missouri, but they did it in 24 and 27 attempts.

So how do you bounce back from the greatest shooting night in the history of the school and state?

“Just forget about it, you know? We always, Coach Brown always tells us, ‘next play,’ so I can’t be thinking to myself that last night I had sixteen threes, and we’ve got to focus on Bolivar now. And so just kind of forget about it and play our next game.”

And that’s exactly what McMillin and the Tigers did. In what might have been their best team performance of the year, they dominated Bolivar Friday night, beating them 55-39.

But the real story of the tournament, maybe of the entire southwest Missouri basketball season, was Drew McMillin’s legendary performance on Thursday.

“It was crazy. I didn’t feel real, honestly. Like, I felt like I could take whatever shot I wanted to and it would go in from anywhere, so it felt… it definitely was a good feeling.” 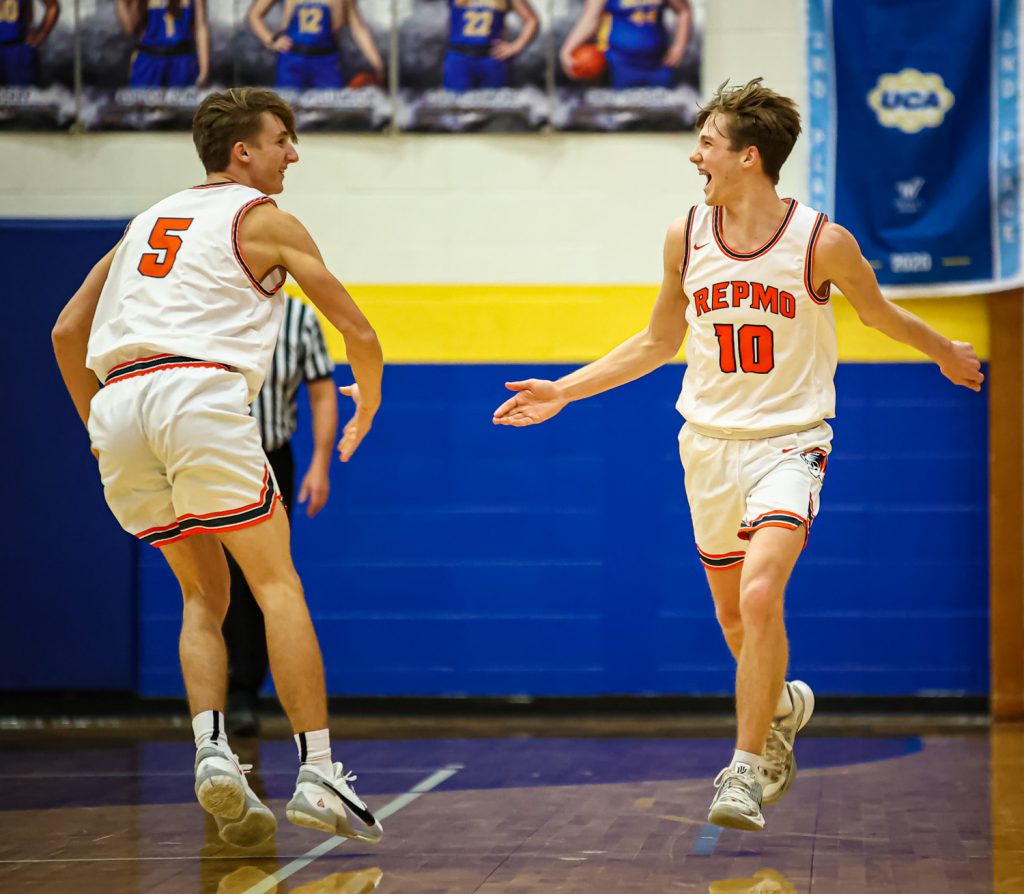