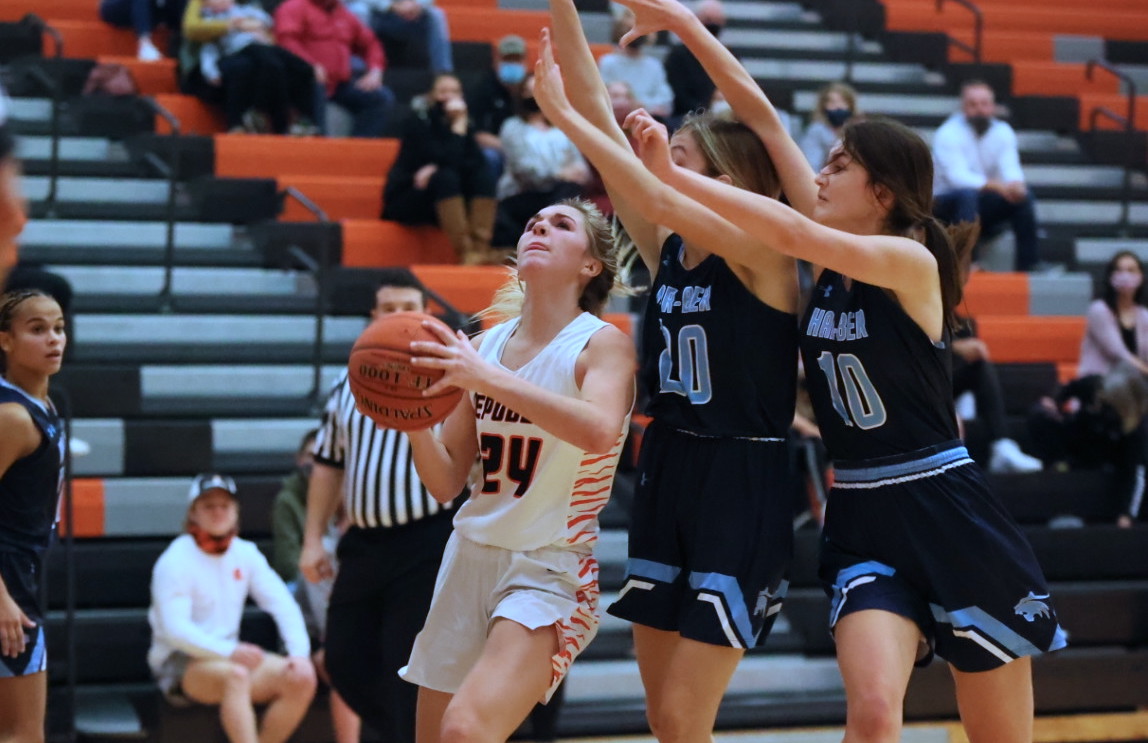 Kaemyn Bekemeier drives past two defenders on her way to the basket. She finished with a school-record 37. (Photo by Steve Rackley / Flat Top Photos)

They tried face-guarding her. They tried double-teaming her. They even tried fouling her. Nothing could stop Kaemyn Bekemeier from putting the ball in the bucket against Springdale Har-Ber Tuesday night. The sophomore guard scored a school-record 37 points to lead Republic to a lopsided win over the Lady Wildcats in their season opener, 75-51.

“She came out fairly aggressive, and it looked like she was pretty focused. She got into a flow fairly quickly and made a couple of nice drives to the basket, then hit the three early in the first quarter and it just seemed like she kind of went from there,” coach Kris Flood said of Bekemeier’s performance. “And she did a lot of that being pretty heavily guarded, especially after that first quarter. It seemed like they switched and were really trying to face guard her and run multiple people at her. Our kids did a good job of recognizing that and did some good things after that.”

But despite Bekemeier’s record-setting night, it was an all-around victory for the Lady Tigers in their first game. Seven different players scored, including Savana Powell-Goodman, who added nine. Several players seeing their first extended varsity action turned in solid performances, as well. Ashlyn Leonard had seven in her first varsity start, and Rilynn Finley, a freshman, added eight off the bench. Eternity Knotts turned in a strong defensive performance, and Cameron Gardner hit a key three-pointer in the third quarter when Har-Ber began cutting into Republic’s lead.

The Lady Tigers jumped ahead 18-12 at the end of the first quarter and led 33-21 at halftime. They eventually led by as many as 25 points on their way to the blowout win.

“Watching on film, they had played some really good teams, some talented teams farily close. They’d been on the losing end of it, but they’d been right there,” Flood said. “We came out and built that 12-point lead at half and extended it in the third quarter, and felt really good.”

Bekemeier scored 13 points in the first quarter to spark Republic early. She also completed five conventional three-point plays, making free throws after being fouled on her way to the basket.

Republic’s previous single-game scoring record had been set by Kim Messier in 1988 and tied by Alice Heinzler in 2013 at Dexter. (See that game story here.) Bekemeier said she didn’t know about the record until she got to the locker room after the game.

“I had no idea,” she said later. “Rylee Moorefield in the locker room was like, ‘Rumor has it you broke some sort of record,’ and I was like, ‘What? Maybe points per game.’ Then I came out (of the locker room) and one of my dad’s friends was like, ‘You broke it!’ So it was really exciting.”

Har-Ber was led by Caylan Koons with 17 points. Pacious McDaniel had 15 despite early foul trouble. The Lady Wildcats fall to 0-4.

Republic is 1-0. The Lady Tigers host perennial girls basketball power Incarnate Word Academy Thursday night at 6 pm. They play Jefferson City at Ozark Friday at 4:30, and they play Rolla at 11 am Saturday, all as part of the Ozark Lady Classic.