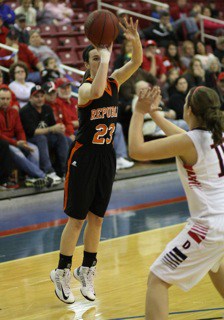 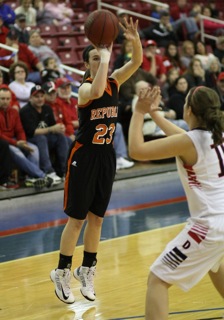 Heinzler rained down seven three-pointers on the Bearcats defense, and 22 of her 36 points came in the 2nd half.

“I woke up feeling pretty good — got a lot of rest last night. I was just ready to go because I knew this was going to be a big game.

“We just kept digging ourselves a hole and I’m like, ‘Goodness, someone’s going to have to do something about it,’ so I did what I could. I just happened to be hot-handed, I guess.”

Turnovers in the first half put Republic in a big hole early. The Lady Tigers trailed 31-16 when a Micah Mansker steal sparked a Republic run late in the 2nd quarter.

“I thought that was the key play of the whole game,” says Flood. “She dove on the floor and got the ball, threw it up and we scored, and it seemed like that energized us at the 3 1/2 to 4-minute mark for the rest of the game.”

From there, Republic scored the final 10 points of the half to transform a blowout into a close game. The score was 31-26 at halftime.

Coming out of the break, Dexter scored four straight points to extend the lead to nine, but Heinzler hit two three-pointers and a free throw to make it a one-point game. When Sarah Kreul scored a bucket and hit a free throw, the Lady Tigers had their first lead with 2:02 left in the 3rd quarter.

Heinzler owned the 4th quarter as she had owned the 2nd and 3rd, scoring 15 points in the final eight minutes to help Republic hold off Dexter down the stretch. Heinzler was seven of seven from the free throw line in the 4th period.

Sarah Kreul was the only other Lady Tiger in double figures with ten points. She played most of the game without the face mask that has been protecting her broken nose. Kreul ripped it off in frustration when Dexter built its early lead.

“The doctor said it’s my choice to play with the mask or not, and I told myself that I would play until my nose wasn’t sore anymore,” she says. “But when you’re losing by 15, things come out of frustration. I just kind of ripped it off and threw it at the bench, and we kind of took off from there.”