One game after an ice-cold shooting performance against Webb City, the Lady Tigers turned up the heat against Neosho in a record-breaking 86-41 victory on the road Monday night. Republic hit a school-record 13 three-pointers, 10 of them in the first half. Seven different players made at least one, and five players scored in double figures for Republic.

The offensive onslaught came so quickly that Neosho coach Grant Berendt called a timeout less than a minute into the game. Republic led 26-10 at the end of the first quarter, and 57-25 at half time. They made 10 of their 15 three-point attempts in the first half.

“We have good shooters, and it was one of those deals tonight where everybody seemed like they were in a good groove, especially in the first half,” says coach Kris Flood. “We seemed to play a little more relaxed tonight–not as tight. It almost looked like we played with a lot more confidence, like we should be able to.”

The record-breaking shot came midway through the fourth quarter from Taylor Fergen, who lined up on the right wing and fired away in front of the Lady Tigers bench. The players rose to their feet in anticipation, and when the ball swished through the net, the Lady Tigers and their fans cheered loudly, making it clear they were aware of the basket’s significance.

Fergen says the team didn’t let a woeful shooting night against Webb City in their last game hold them back, as they came out strong against Neosho.

“You just have to keep shooting. If you have an off night, normally the next night, you’ll have a night where you do really good shooting the ball, and I think that’s what we did tonight. We came back and we shot the ball really well.”

Republic improves to 17-1. They’re 3-0 in the Central Ozark Conference. The Lady Tigers play Wednesday at 8 pm against Bolivar in a game that’s a hold-over from the weather-delayed Bolivar Tournament earlier this year. 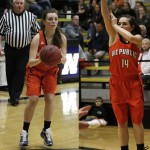