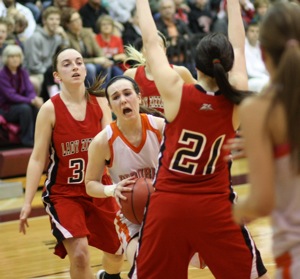 State-ranked opponents Republic (3) and West Plains (2) battled back and forth into overtime. The lead changed hands four times in the final minute. But an eight-foot jumper by West Plains’ Hannah Riggs sailed through the net as the buzzer sounded, giving the Lady Zizzers a 59-58 win and sending Republic home without a district championship for the first time in five years.

“It’s hard to lose in overtime on a buzzer beater,” says coach Kris Flood. “We’d rather, I guess, maybe get beat by 10 or 12. When she let it go…it just looked like it was going to go in.”

The Lady Tigers fell behind early in the overtime, and looked to be in trouble with seniors Alice Heinzler and Sarah Kreul on the bench, having fouled out. When Cassidy Johnson hit a free throw with :48 left, the Lady Zizzers led 54-51.

Republic answered quickly, pulling within one on a layup by Bartelsmeyer. After West Plains hit one of two free throws, Alex Botkin hit a three-pointer that bounded high into the air before dropping through the hoop, to give Republic a one-point lead.

West Plains answered with a layup of its own to take a 57-56 lead. But Kayla Bartelsmeyer was fouled at the other end, and hit two free throws to put Republic on top 58-57 with 11.5 seconds left. 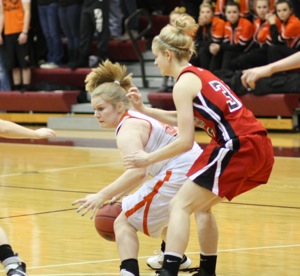 That set up Riggs’ heroics. Republic focused its defense primarily on stopping Andi Haney, who led West Plains with 27 points. When Cassidy Johnson’s three-point attempt rimmed out, the Lady Tigers couldn’t get their hands on the rebound. The ball ended up in Riggs’ hands on the left side of the lane, and her high, arching jumper went through to give West Plains the victory.

“I thought they stood up and did what they could do,” Flood says of his defense down the stretch. “We had a chance there with 11 seconds and the lead, and just couldn’t get a rebound. That’s kind of been one of our bugaboos there.”

The Lady Tigers had outplayed West Plains in the 1st half, and a 26-foot, off-balance jumper by Heinzler at the halftime buzzer gave Republic a 31-21 lead. But West Plains scored five quick points in the 3rd quarter to get back in the game, and forced the action the rest of the way.

“We just never really had the momentum in the 2nd half. It felt like we were back on our heels and they were aggressor,” Flood says. “We could not come up with any stops in the 2nd half. Didn’t matter if we were zone, man, or whatever.”

The loss ends an unforgettable year for the Lady Tigers’ basketball program, which at one point compiled an 83-game winning streak from 7th grade through varsity. It also ends the careers of five seniors — Sarah Kreul, Alice Heinzler, Lindsey Carlson, Alex Botkin, and Kayla Bartelsmeyer — who were part of a historic run of success for Republic girls basketball.

“Prior to them coming into high school, we’d had a couple of lean years there,” says Flood. “We had a really good foundation before…and we had some cracks there. And I thought they filled in the cracks very admirably.

“A lot of them played four years, some of them played three years, and they’ve had a tremendous run and it’s hard to see them go. They’re all going to college, they’ve got a lot of things to look forward to. This is just one little piece, but this is tough.”

In their final game, Republic’s seniors combined for 50 of the team’s 58 points. Heinzler led the Lady Tigers in scoring with 22 points before she fouled out in the 4th quarter. Kreul added 14 before she fouled out. Carlson and Botkin added five apiece, and Bartelsmeyer had four.

Republic ends its season with a 25-2 record. West Plains improves to 27-1 and advances to the sectional playoff round next Wednesday.