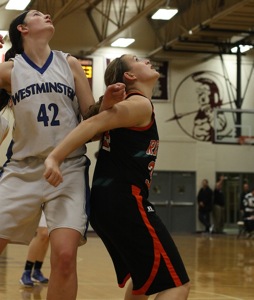 The Republic Lady Tigers used their speed and quickness advantage to run past much taller Westminster Christian, winning 59-40 in the Prepcasts.com Elite Shootout at DeSmet High School. Alice Heinzler scored 20 to lead the Lady Tigers and capture player-of-the-game honors.

Playing against a team that includes 6’3″ all-stater Sadie Stipanovich and 6’2″ Adrienne Horn, the Lady Tigers planned to rely on their athleticism to make the difference. Coach Kris Flood assigned guard Alex Botkin to guard Stipanovich, hoping to create a mismatch. But Botkin’s early foul trouble forced Sarah Kreul to step into that defensive role more than expected. 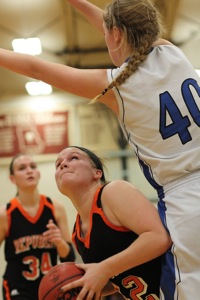 “When someone’s huge, we just get around and we use our agility and speed rather than our brute strength,” says Kreul.

Lindsey Carlson, assigned to guard Horn, knew what to expect going into the game.

“We knew we were going to be outsized, so we wanted to make sure to get in front of them, and not let them get the ball,” Carlson says.

Republic jumped to a 6-1 lead, but Westminster stormed back to take its first lead at 10-9 midway through the first quarter. At the end of the first, it was 19-17 Republic. By halftime, Republic built its lead to 31-24.

“As the game progressed, I think we wore them down just a little bit,” says Flood. “That second half, we hit them with what we’ve been doing all year. A 6-0, 7-0 run. We’ve been fortunate to be in leads at the time, and extend it out and keep pressure on them.”

Westminster made one more run late in the fourth quarter, but Republic shut the door with a 6-0 run and ended with a 19-point win.

Flood says the experience of traveling to St. Louis to see a final four team from last season will be good for the Lady Tigers as the conference season opens.

“The girls were excited when we got invited. To go out and get a big win in a different environment, we’ll take it,” he says. “But there’s not much time to rest. We’ve got to get ready for Carthage.”

The Lady Tigers open their COC season against Carthage Monday. Carthage also played in the shootout at DeSmet.

Republic improves to 10-0 this season. Westminster Christian falls to 7-3.