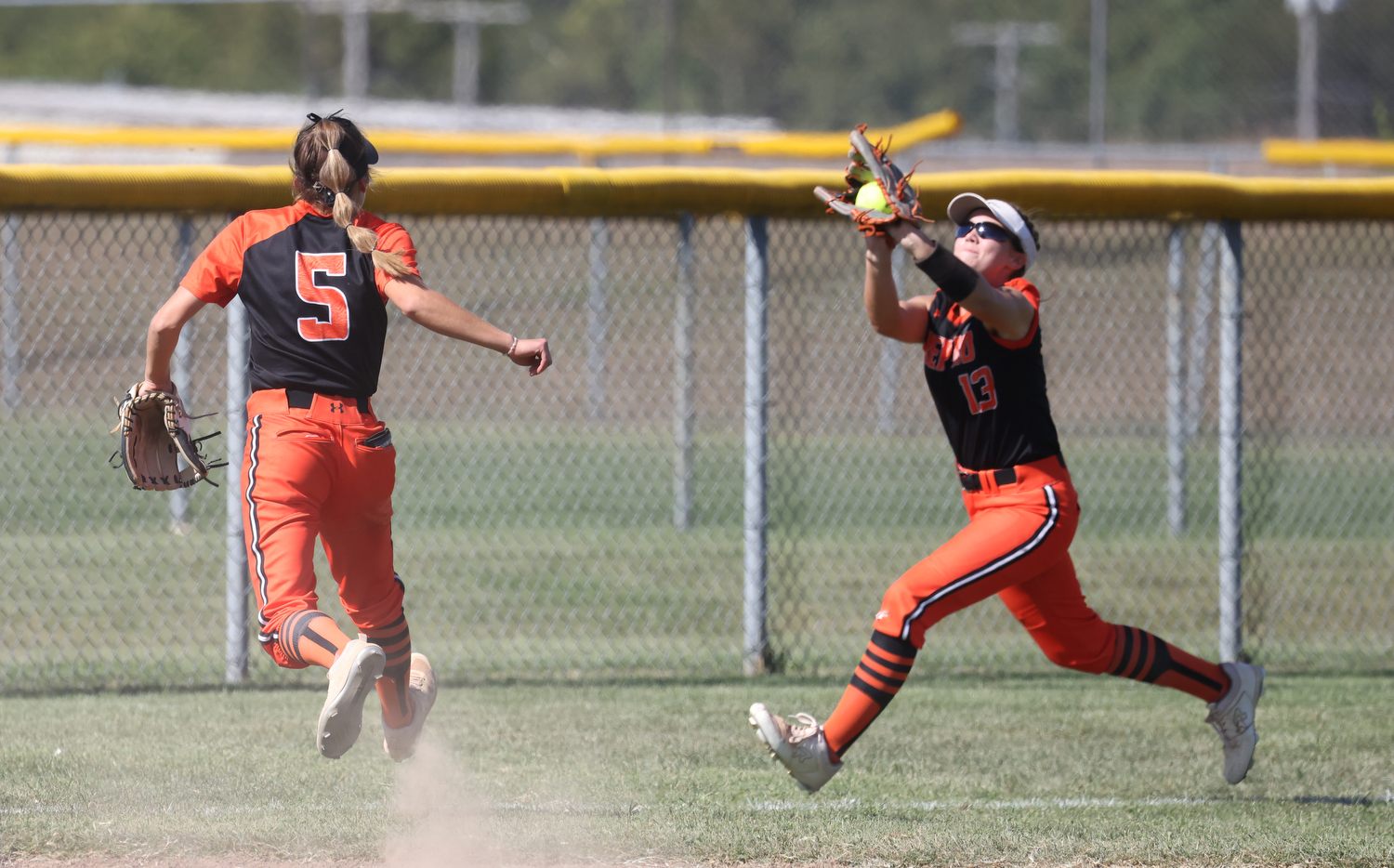 Sammi Watson makes a running catch near the third base line in Republic’s game against Liberty.

“We played really well. They’re just relentless,” coach Lee Dishman said of his young players. “They’ve got a good mindset on them right now. We let one slip away at Carthage, but we came back this weekend and faced some good teams from out of area and competed every game.”

Republic got two good pitching performances to open the tournament, with Piper Dishman shutting out Columbia Battle and Kara Goeke doing the same thing to Glendale.

Dishman struck out eight batters in five innings to post a shutout. Annabelle Gerhardt-Hobbs homered to power the Republic offense, and finished 2-for-3. A three-run fifth inning, after the solo homer in the fourth, helped put the game away. Gracie Woods and Jenna Belcher had RBIs in that inning.

Goeke allowed just one hit in her outing against Glendale. Essary hit her first home run of the weekend, drove in three, and had two base hits. Belcher and Lilli Richerson also had two hits each. Richerson added three RBIs.

Republic came from behind Saturday morning against Park Hill South, scoring three runs in the fifth inning to overcome a one-run deficit. The Lady Tigers only had five base hits — two by Belcher, two by Essary, and one by Woods. Essary doubled and tripled. Woods scored twice. Piper Dishman earned the win by pitching five innings, allowing two runs and striking out eight.

Republic came from behind to tie the game on two different occasions, but Nixa did the same thing three times, including a three-run rally in the bottom of the eighth inning that gave the Lady Eagles a walk-off win. Nixa led 7-1 after one inning, but a five-run second inning pulled Republic within a run, then a single tally in the top of the third tied the score. Nixa scored two in the bottom of the inning, and Republic tied it again in the top of the fourth. The Lady Tigers took a 10-9 lead in the fifth inning, only to see Nixa tie the score in the bottom of the fifth. Each team scored a single run in the seventh. Republic scored two in the eighth, but Nixa answered with the game-winning three-run rally.

Essary and Gerhardt-Hobbs both homered for the second time in the tournament. Belcher tripled and doubled. Addie Brown was 4-for-5 and Richerson was 3-for-5 with three RBIs. Gracie Woods had two hits, two runs scored, and two runs batted in. Goeke was the losing pitcher for Republic.

Republic out-hit Liberty 11-8, but fell in the final game of the tournament Saturday afternoon, 8-6. Essary’s two-run homer in the first inning was a highlight for Republic. Essary now has 13 homers this season and 27 in her career, tying the school record held by Kami Holt. She finished the game 3-for-3. Sammi Watson and Jenna Belcher each had two hits.

Republic finished the weekend with a 16-11 record, and Dishman said he likes the way the team is playing as the end of the season approaches.

“We’re down to the final stretch. Where we started and where we are now is vastly different in a good way. We still have our moments, but we’ll keep getting better, and come district time, I think they’re going to be scary.”