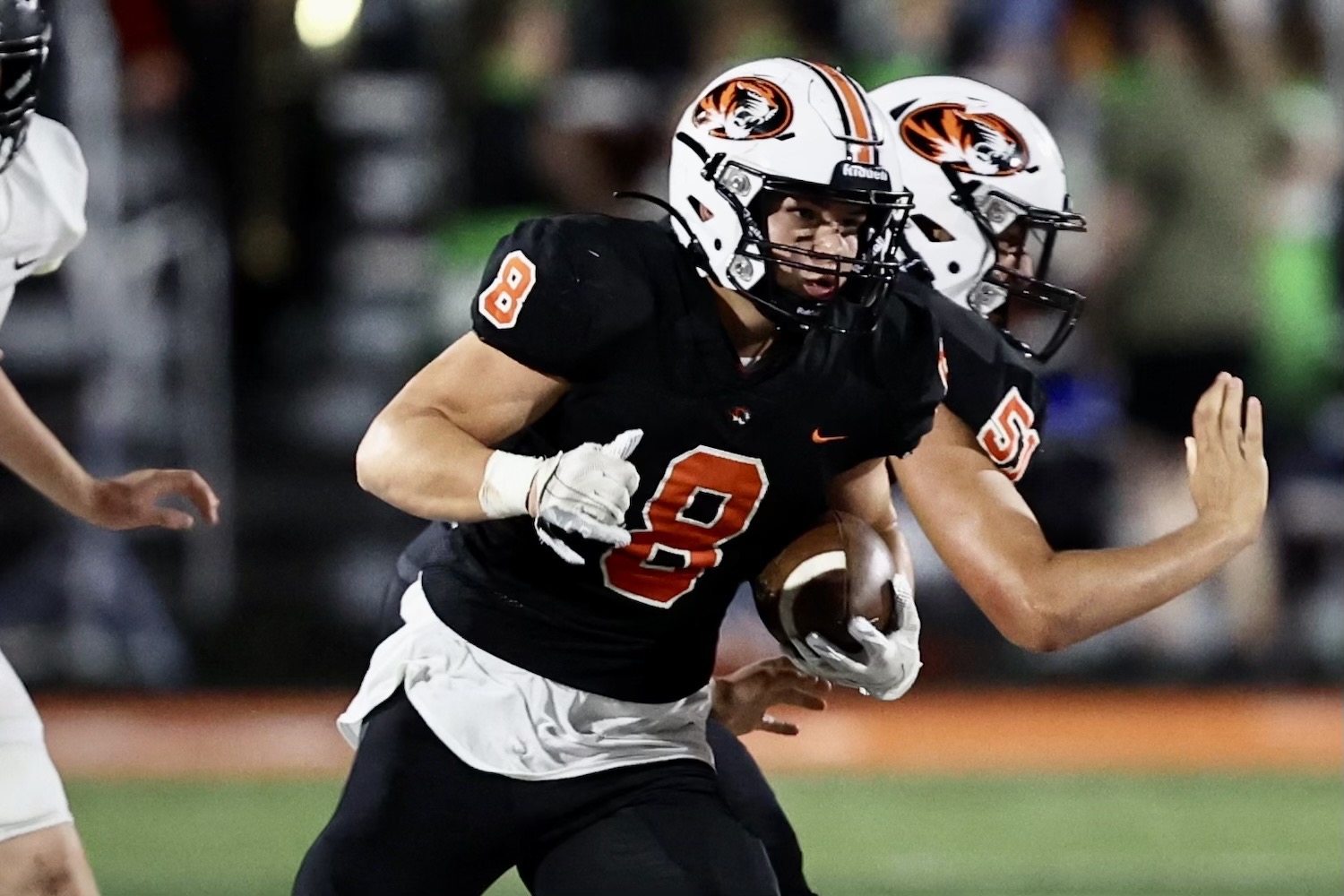 Fullback Kanon Krol spends most of his time blocking for others, but Friday night, he got the ball and made the most of it.

“It’s always a good time getting the rock,” Krol said.

Krol had a good time rushing for 142 yards and three touchdowns in a 63-48 win over Neosho. He was one of three backs to go over 140 yards for the Tigers behind a dominating offensive line.

In addition to Krol’s 142-yard night, Wyatt Woods romped for 202 yards and four CDs from the quarterback position. Connor Sandridge had 151 rushing yards and two touchdowns. Republic had the ball ten times, and they scored nine touchdowns. The only drive that didn’t end with a touchdown was the last one of the game, when Republic took a knee inside the ten yard line.

Republic built a 35-13 at halftime, thanks partly to excellent defense against a Wildcat team that had averaged 52 points a game through the first three weeks of the season. The Tiger defense forced three punts, including two straight three-and-out possessions by Neosho in the first quarter.

Neosho showed a glimpse of its high-octane offense on the first possession, scoring on a 67-yard touchdown pass from Quenton Hughes to Isaiah Green to lead 7-0. Republic answered with a 66-yard drive, highlighted by a 51-yard TD run by Woods to make it 7-6, but missed the extra point.

After a 3-and-out by Neosho, Connor Sandridge took the starring role. He rushed for 25 yards on one play, then went into the end zone from eight yards out to make it 13-7.

Republic got another defensive stop and the Tigers scored again. After a long third-down reception by James Rexroat, Woods scored on a 12-yard run, and the two-point conversion made it 21-7.

Neosho scored quickly again on its next possession. An 82-yard touchdown pass to Green made it 21-13. Neosho missed the extra point.

Krol took over on the next drive. He had seven of the 13 carries for Republic, and he finished it with a one-yard TD run to put Republic up 28-13.

The Tigers scored again after another defensive stop. Rexroat had another long reception — this one 45 yards — before Woods ran it in from 21 yards out to make it 35-13, the halftime score.

Neosho’s brightest moment came in the opening seconds of the third quarter. The Wildcats recovered an onside kick to open the second half and scored on the first play from scrimmage — a 47-yard run by Jared Siler. That made the score 35-20, but the momentum swing wasn’t enough to swing the game in Neosho’s favor. The Wildcat defense couldn’t get a stop, so Neosho could only trade scores the rest of the night.

Krol rushed for another touchdown on the next Republic drive. He accounted for the last 39 yards of the drive to put Republic up 42-20.

Neosho got another TD pass from Hughes to Cade Camerer to pull within 15 again, but Republic drove down the field and scored on another Krol run from five yards out, making the score 49-27. A Siler rushing touchdown made it 49-34 to end the third quarter.

In the fourth, Woods rushed the ball in from 20 yards out at the start of the fourth quarter, giving Republic a 56-34 lead. Neosho answered on another TD pass to Camerer, and Sandridge scored on a 29-yard run to give Republic 63 points.

Neosho wrapped up the scoring on a 30-yard run by Siler, making it 63-48. Republic got the ball back and was driving to the end zone again when time expired.

In addition to Woods’s 202 rushing yards, he threw for 62. In total, Republic racked up 635 yards of total offense.

Both teams are 2-2. Republic will travel to Willard next week.

Three Tiger running backs rushed for more than 140 yards Friday night against Neosho, and they couldn’t have done it without the big push of the offensive line up front. Among the contributoers were Myles Lozano, Carter Nation, Eli Weaver, Jaden Crowley, Max VanWyk, and Mason Mitchell. Collectively, the offensive line opened the door for the Tiger backs to rush for 573 yards, and they are our Farr Better Players of the Game.