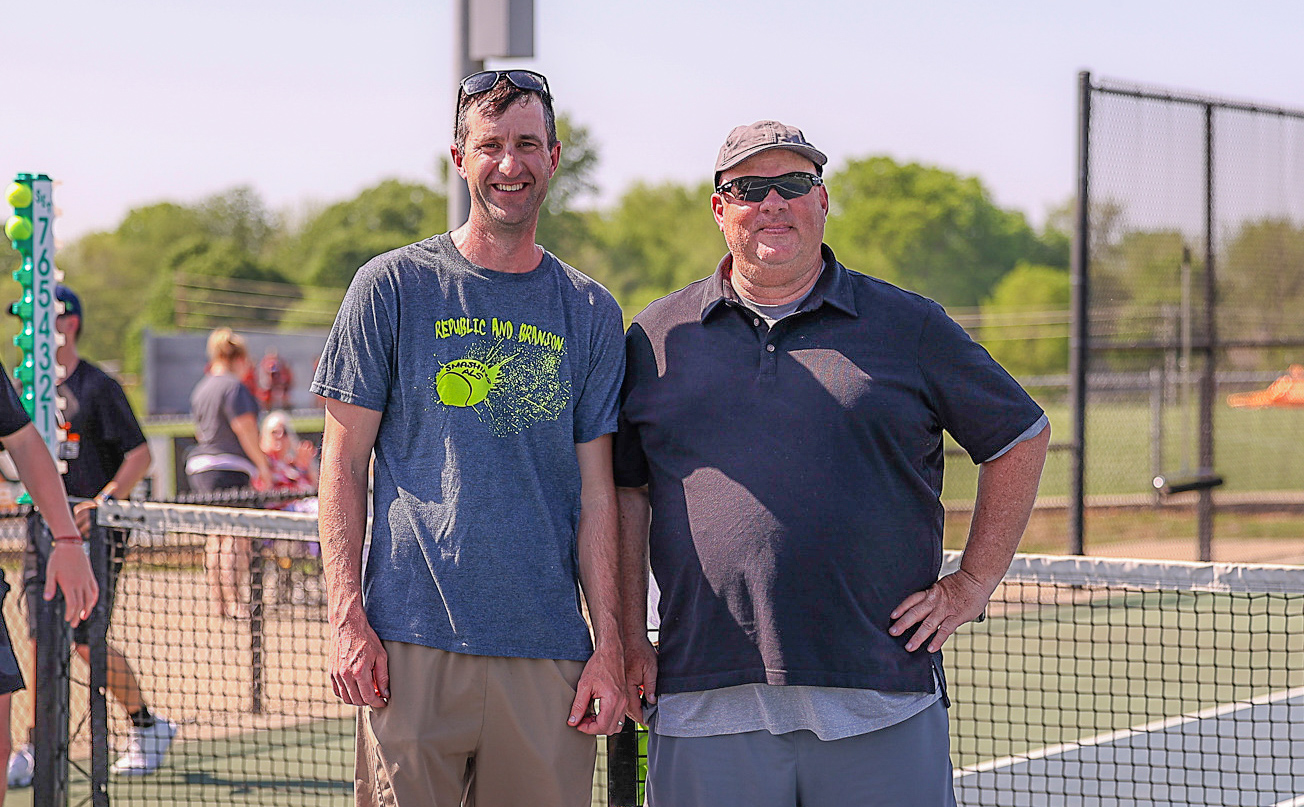 Dan Vales (left) and David Smashey have coached together at Republic since 2018. (Photo by Steve Rackley)

The man who has led the Republic tennis programs to some of their biggest successes will no longer be head coach next season. Dan Vales will step into an administrative role as Special Education Process Coordinator at Republic High School, and he’ll give up the head coaching job as part of that move.

“I am excited about the opportunity to make a greater impact leading Special Education teachers in our building and make a positive impact on the lives of more students. It is also an opportunity for growth professionally as well in this new position,” Vales said. “But it is hard to step away from being the head coach of tennis because I have really enjoyed leading teams the last decade. I love the sport, enjoy the connections we get to make with our players, and it’s fun to compete against other schools.”

David Smashey, Vales’s assistant, will become the head coach. Vales may remain as an assistant coach for a year, if the district doesn’t find someone else to fill that role.

Vales has been the head coach of the boys program since 2013, compiling a match record of 94-50. He has been girls head coach since 2018, with a match record of 49-19. He led the girls team to its only final four appearance two seasons ago. Under his direction, the boys program won two Central Ozark Conference titles and two district championships; and the girls program won two COC titles and three district championships.

During Vales’s tenure as an assistant or head coach, Republic earned nine entries at the state tournament, three singles and six doubles.

But despite all the winning moments as a coach, he said his favorite moment was not competitive.

“My all-time favorite moment was the ‘Smash ALS’ fundraiser we did in spring 2017 in honor of Stephen Nacy, who passed from ALS,” he said. “It was so special to see our tennis community rally in support of that great cause in support of a family I so admire.”

Vales also said he’s proud to have played a role as a founder of the SWMO Summer Tennis series.

“This is giving high school students all over southwest Missouri the opportunity to play tournaments, grow as players, and better compete with players from the KC and St. Louis area,” he said.

One of the hallmarks of Vales’s tenure has been his ability to bring new players into the program, despite their inexperience, and mold them into varsity contributors. Smashey said Vales’s love of tennis is part of what made that possible.

“His enjoyment of every aspect of the sport is infectious,” Smashey said. “The other thing that matters so much is his patience. Dan takes the long view of things, which is really important to a sport like tennis that takes a while to learn.”

In addition, Smashey said Vales is “incredibly competitive. He is always thinking about what we can do to get better and win matches. he is remarkably well-organized. There’s a lot of individual moving parts in a tennis practice or match, and he handles them with amazing ease.”

Smashey said he knows he has big shoes to fill as he takes over the top tennis job.

“It’s a little daunting taking responsibility for programs that have been so successful under Dan and Eric Hanson. But, I’m really looking forward to the challenge of teaching the game to our talented young players on the way up. Tennis has been such an important part of my life — I hope I can pass on what I’ve learned and share my love of competing as a team.”

Vales is the second person this year to step away from a head coaching job for a role in administration. Kevin Hauck coached his last soccer season this spring to become an assistant principal.