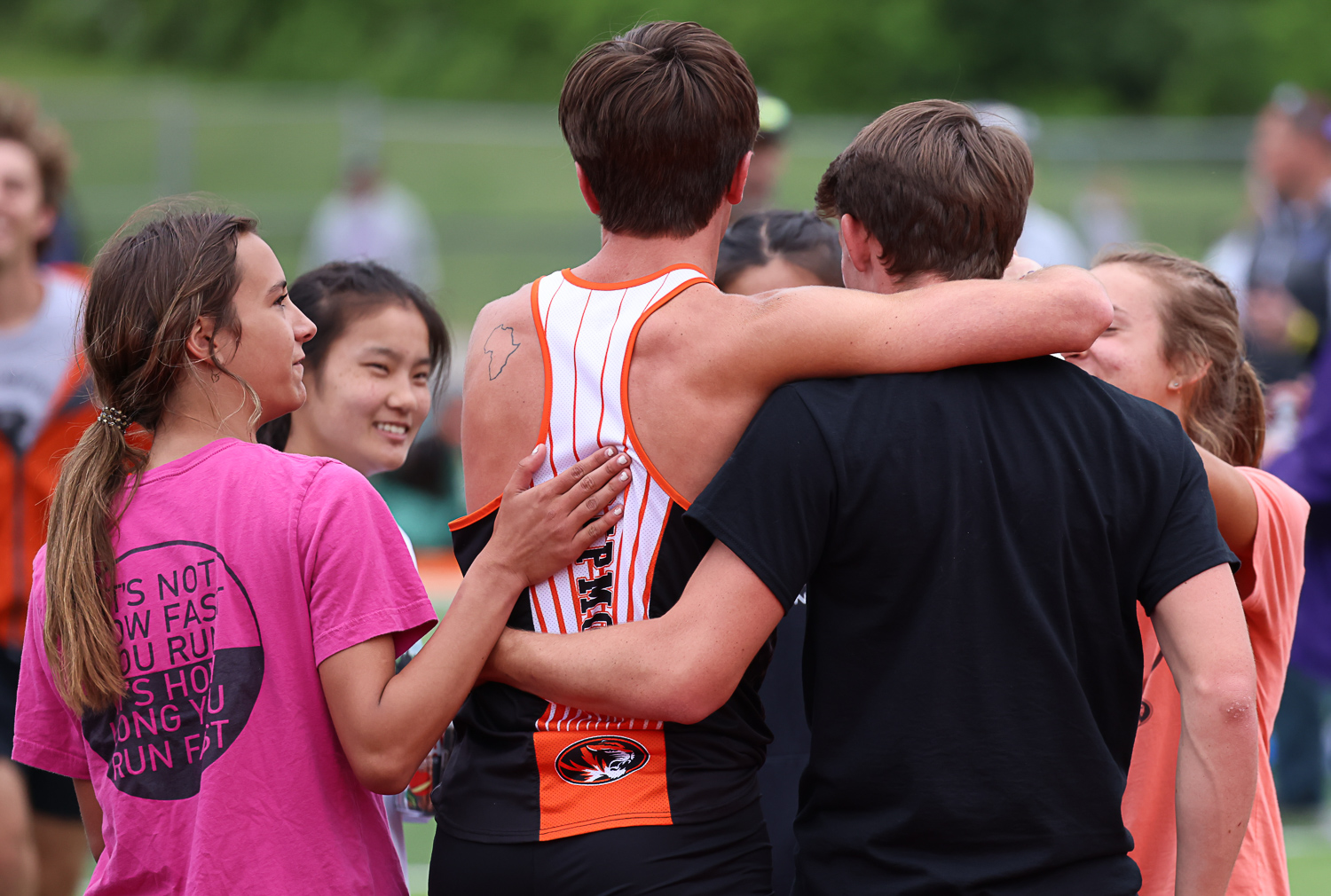 Teammates congratulate Devon McMillin after his home-stretch sprint earned a state berth in the 800m run.

Republic will compete in ten events at the state track meet in Jefferson City this weekend. It’s the most state track and field events for Republic since at least 2003, the earliest year for which records are available.

Eleven athletes will compete for Republic, including four who qualified in two events during the sectional meet at Waynesville Monday. (The meet had been postponed Saturday because of storms.) Two of those Tigers are double qualifiers in individual events.

Chase Buford finished third in the long jump and second in the 100m dash to advance in both. He said when the season began, he knew a state trip was possible in both events, but far from a sure thing.

“I knew my long jump was pretty good. I had a disappointing fifth-place finish at sectionals last year, and I just came with some intensity in that and worked on it way more in practice,” Buford said. “For the 100, I was struggling at the start of the year. I wouldn’t finish good, or my start wasn’t that good. So I just had a great start today and was able to get on through.”

Devon McMillin earned Republic’s only event championship at sectionals, winning the high jump. It’s an event he’s still learning, because he only competed in it three times before districts last week. He finished second at the large meet at Southwest Baptist University in his first outing this season on April 25.

“Coach (Cornelsen) was pretty pumped, so he just kept high-jumping me,” McMillin said. “Last year, I think my PR was six foot, which wasn’t bad, but it wouldn’t have cut it here. Now I’m jumping almost 6’4″, and I didn’t even know I was going to be good at it.”

McMillin also finished fourth with a thrilling finish in the 800m run. After being boxed in and falling behind, he closed a big gap to qualify with a personal-best time of 1:57.82.

“About 100 meters into the second lap, people started trying to get around me, and that’s where I got boxed in, because I was trying to go with them, but I was stepping on heels, so I just hung onto that spot. At that point I was in fifth place and I had a kid coming for me… We rounded the second quarter on the second lap, and when the 100 opened up, I moved over into lane three because there was a kid pushing me, and I just took off. The kid I beat for fourth was probably 15-20 meters ahead of me on the last 100, and I got him on the lean on the finish.”

Miller Rountree qualified in both hurdle events, the 110m and the 300m. His time in the 300m (40.07) broke his previous school record by more than a half-second. He had been ranked sixth before the race, but finished fourth.

“I’ve run since seventh grade. It’s the only sport I do for the school, so it feels really good to finally get . We didn’t have a sophomore year, then as a freshman and junior, I made it to districts but couldn’t make it through. So it’s really rewarding,” he said. “There’s been a lot of hard work for sure, and a lot of days I didn’t want to run that I went out and ran because I knew this is what it meant.”

Rountree has his eye on the 15-second mark in the 110m race as he heads to the state meet.

“I’m trying to get down below 15 because that’s a school record. If I can get below 15, I’ll graduate with three records, so that’s the goal,” he said. (In addition to the 300m record, Rountree is part of this year’s record-breaking 4×400 team.)

Alaina Norman qualified in the javelin throw and as part of the 4x400m relay team. She only began throwing the javelin this season.

“Cornelsen wanted me to be a discus thrower, but that didn’t really work out in the previous years, so I really wanted to try something new, so I did javelin,” Norman said. “I guess I have the length and the arm strength. There’s things I need to fix, obviously… but it’s really fun. I really enjoy it and all the girls that I throw with are so nice.”

In the 4×400 relay, Norman passed two runners on the first half of her lap, helping the team qualify. She said she prefers running 400 meters as part of a relay compared to a stand-alone race.

“I would say the open 400 is worse than the 4×4, and I don’t really know why, because the 4×4 is my favorite event in the 400. It’s something you have to work for, but it’s so much more fun running for a team and setting goals.”

Kristin Probst ran the final leg of the 4×400, and she was also part of the 4×800 team that qualified. She said she can’t choose which of those two races are her favorite.

“Running relays is one of my favorite parts about track, just because of the relationships you get to build with your teammates,” she said. “You really get to push each other to do your very best. When you have someone wanting to get the school record, and if you don’t do your best for that, it just makes you feel horrible. So you always have to do your best, no matter what, in the relays. And it really shows when you get to sectionals.”

One other notable performance Monday was the boys 4x800m relay team, which broke the previous school record by three seconds, but failed to qualify for state, finishing fifth. Will Fronabarger, Ethan Haynes, Derrick Buchanan, and McMillin ran their race in 8:10.38, shattering the mark of 8:13.22, which they set on May 6.