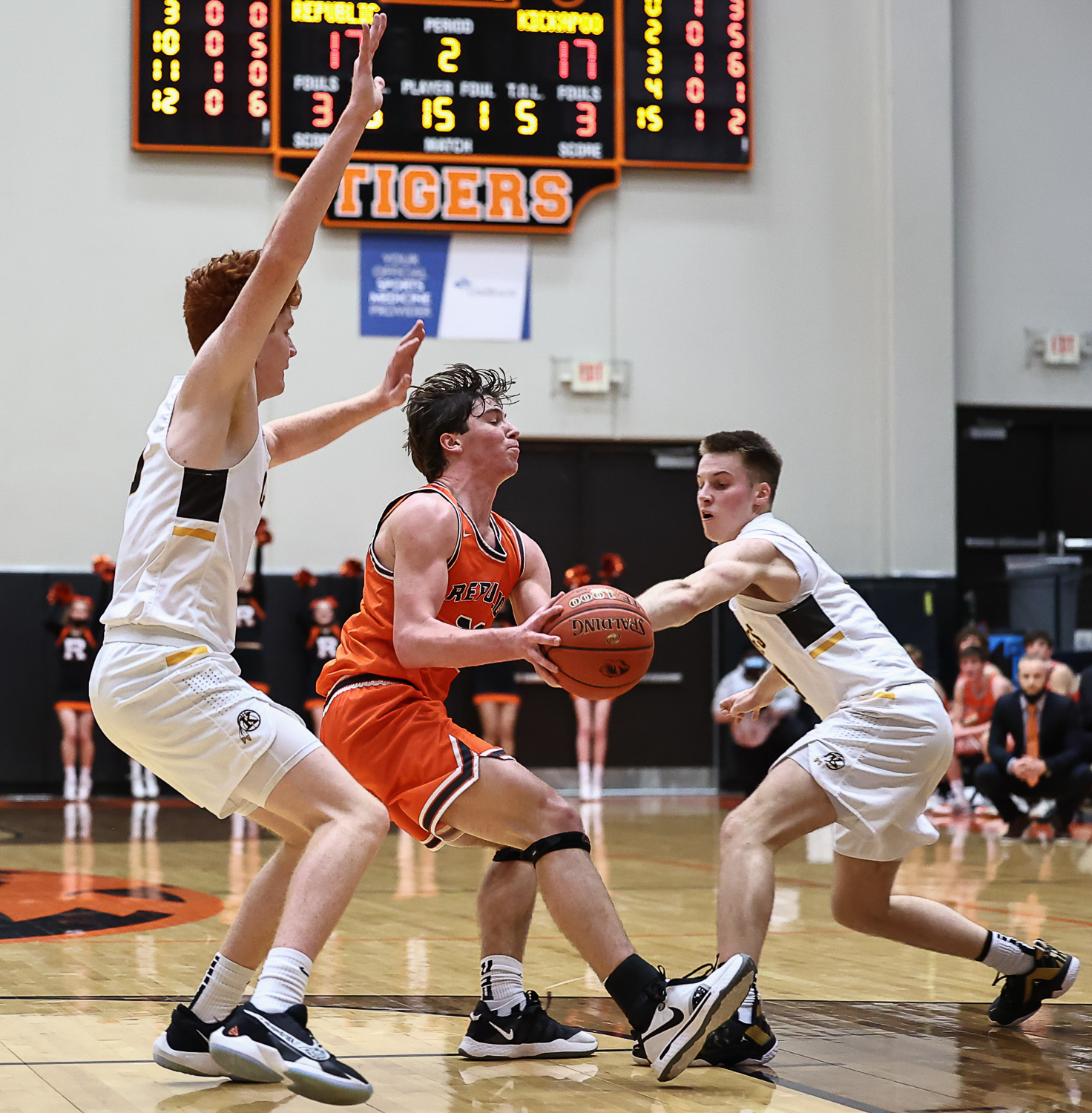 (File photo) Avery Moody, pictured, and Will Fronabarger hadn’t played since the last game of 2020-21, but both returned to the floor to spark the Tigers Friday.

Tigers Welcome Back Seniors in Win Over Irish

Senior Will Fronabarger had been in the game 53 seconds when he ripped the ball away from Springfield Catholic’s Liam O’Reilly, forcing a turnover in the process. That was the first of many times that Fronabarger and fellow senior Avery Moody – both of whom returned from injury for the first time – drew extra attention from the Irish. Fueled by the seniors’ return, and with help from a 30-point outburst by junior Ahlante Askew, the Tigers upset Catholic 71-63 at home Friday. Devon McMillin, Republic’s third senior, continued his steady and improving play with a 16-point night. The Tigers led from start to finish.

After the teams played fairly even in the first quarter, the Tigers put together one of their best eight-minute stretches of the season in the second quarter. They outscored Catholic 21-5 to extend a 13-12 lead to 34-17 at halftime.

“We were very efficient offensively, then we just did some things defensively to mess with them a little bit,” said coach Tim Brown.

Devon McMillin played lock-down man-to-man defense against Irish top scorer Zach Howell, with the rest of the Tigers in a box-and-one. Howell had only five points at halftime – two of them on a back-court steal and dunk. McMillin held him scoreless in the second quarter.

With the Irish shut down, Askew exploded on Republic’s offensive end of the floor. He scored 11 points in the second quarter and 18 in the first half to help the Tigers build their big lead.

Republic eventually stretched the lead to 21 points at 48-27, but Catholic started to make a run at the end of the third quarter. The Tigers led 50-35 after three. The Irish outscored Republic 18-4 to start the fourth quarter to cut the Tigers’ lead to one, but they never did take the lead.

After struggling at the free throw line in recent games, the Tigers stepped up to finish the win Friday. Devon McMillin made six fourth-quarter free throws, and Ahlante Askew and Brenley Hagewood made four each. Gunner Ellison also made one that gave Republic a two-possession lead down the stretch.

“We’ve gone toe-to-toe with some of the best teams in southwest Missouri all season long. We’ve not been able to get over the hump in some of those games, and we just beat a top-two (or) top-three team in southwest Missouri, coming off a great showing in the Blue & Gold – a team that just got chosen to be in the Tournament of Champions. I think it says a lot about our program, about our guys continuing to fight.”

Brown said the addition of Fronabarger and Moody to the rotation changes the way his team can play.

“We had some faces in the lineup that we have missed, and I think our team’s really excited about where our basketball team’s going and what’s ahead,” he said. “Will’s a floor general… then he allows us another ball handler. He’s able to take a lot of pressure off Ahlante. ‘Te was incredible (and had a great game,” and we were able to have a fresh ‘Te in the fourth quarter because he wasn’t having to handle it as much.”

Ahlante Askew scored 30 points, and that’s plenty to earn player of the game honors – but this was a special night for two of Republic’s seniors. Avery Moody and Will Fronabarger, who both missed the first half of the season with injury, returned midway through the first quarter and immediately lit a spark for the rest of the Tigers, including top scorers Askew and Devon McMillin. For their determination, defense, and hustle, Moody and Fronabarger are our Farr Better Players of the Game.