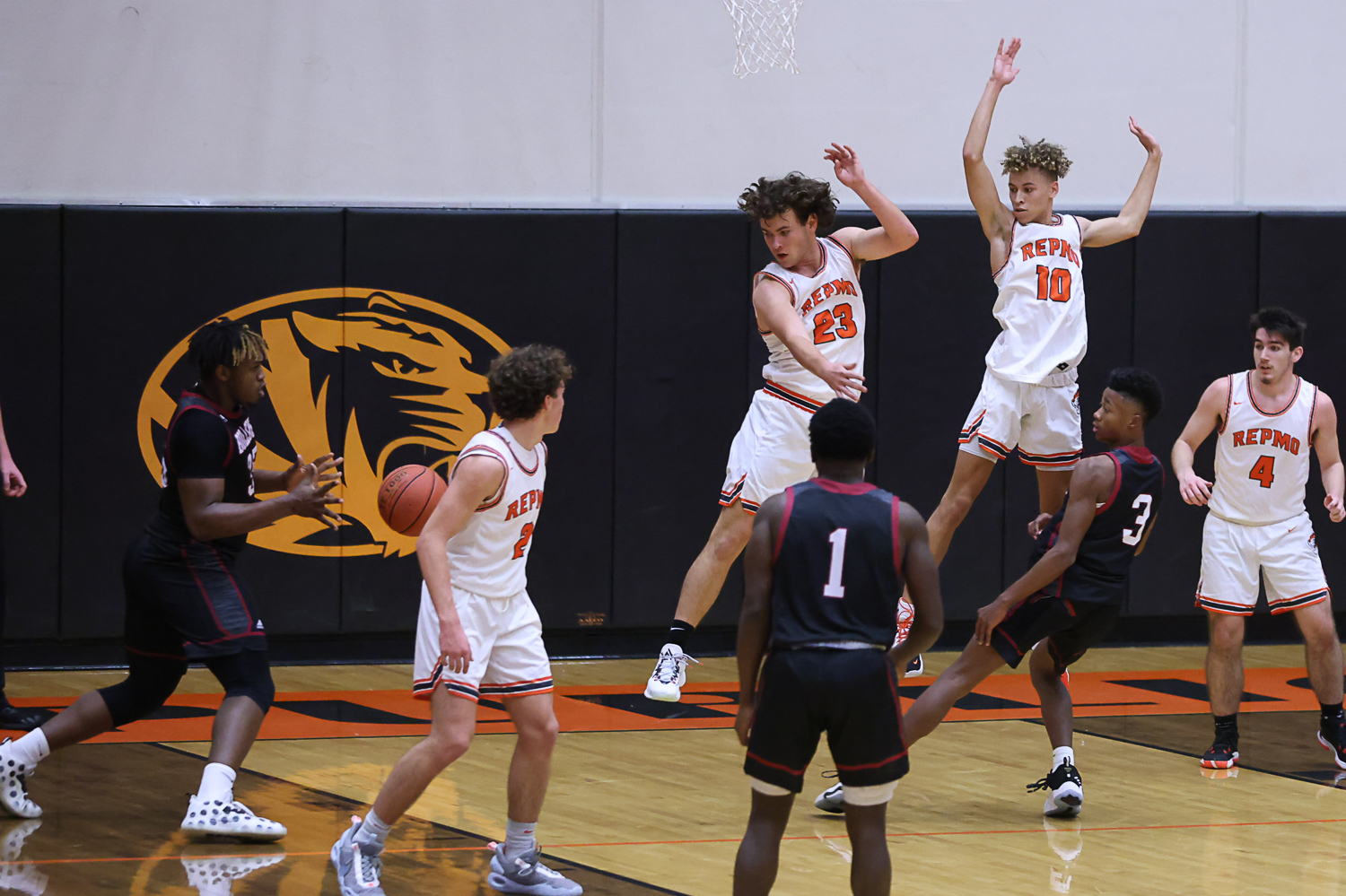 Gavyn Beckner and Ahlante Askew watch Springdale’s Tevin Tate catch a pass after teammate Courtland Muldrew dished the ball to him on a drive in the second half.

Tigers Stumble Out of the Gate in Loss to Springdale

Springdale, Ark. used stifling defense to throw Republic off its rhythm all night in a 53-47 win over the Tigers in the first round of the Republic Invitational. The Bulldogs held Republic to just 16 total points over the second and third quarters to take control.

“Obviously we made a lot more mistakes and turnovers than our teams are accustomed to making… We beat ourselves in a lot of areas,” said coach Tim Brown. “We can’t simulate the athleticism and speed and size that forced us into that, so give them credit.”

Springdale led 16-12 at the end of the first quarter, and when Ahlante Askew hit a three-pointer early in the second, the Springdale lead was down to one, 16-15. But the Tigers managed just four more points for the remainder of the half, and the Bulldogs stretched the lead to 26-19 at the midway point.

Springdale outscored Republic 13-9 in the third quarter to take an 11-point lead and held off the Tigers down the stretch. Republic scored 19 points in the fourth quarter compared to 14 for Springdale, but three of those came on a long three-pointer by Askew at the buzzer after the game was out of reach.

Jordan Douglas came off the bench in his first varsity game and kept the Tigers close. He finished with 11 points, including three three-pointers. Askew led the team with 14 points. Courtland Muldrew scored 18 for Springdale to lead all scorers.

Springdale had already played several games this season, and Republic was playing its first. That made it harder for Republic to get in sync early, but Brown said he was pleased with his team’s effort.

“I thought defensively, overall, whenever we were able to set our defense in the half court, I thought we did a pretty decent job,” he said. “They had some guys that hadn’t made shots previously, in the games we were able to see. But our effort was good.”

Republic will play in the loser’s bracket semifinals Friday at 5:30 p.m. against Rolla. The Bulldogs pushed top-ranked Liberty before falling 49-43 in the opening round.

“We’ve been in this position before and our teams have been able to bounce back,” Brown said. “We’re trying to figure out who we are and what our identity is, and that’s why you play good people early in the year, to help you figure that out.”