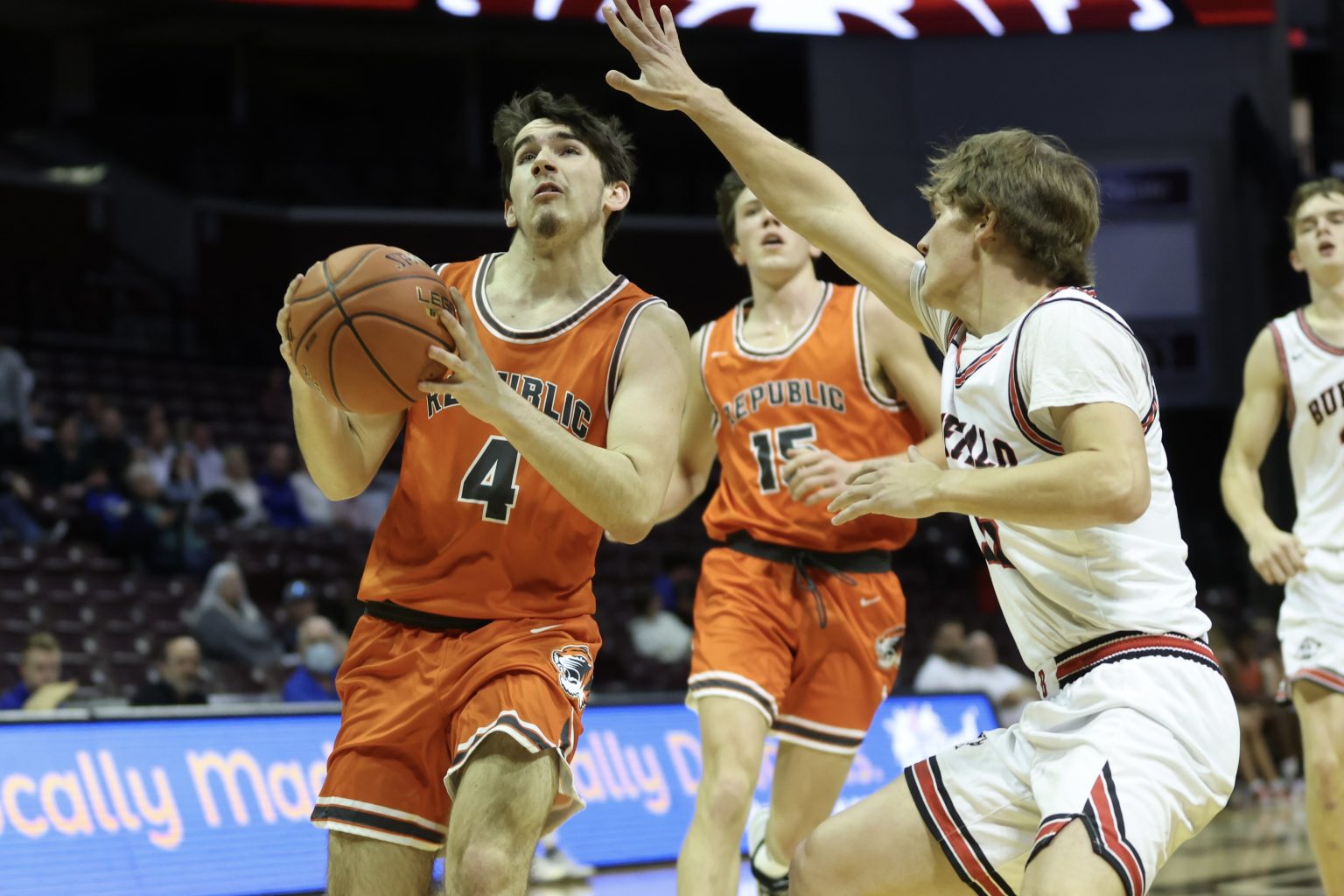 Jordan Douglas drives to the basket in the first half. He led the team with 14 points.

Tigers Sprint Away from Buffalo in Blue & Gold

Republic scored the first 20 points of the game and romped to an easy opening-round victory over Buffalo, 76-25. The Tigers controlled the game at both ends of the floor from the very beginning, with senior Devon McMillin setting the pace. McMillin had four points, a blocked shot, and a rebound within the first 90 sconds. Back-to-back steals by Ahlante Askew led to four more Republic points, and the rout was on.

Everyone on the team scored, and four players scored in double figures. Jordan Douglas came off the bench to lead the Tigers with 14 points.

“It’s great to be able to get a win and get a lot of guys experience in the Blue & Gold Tournament,” said coach Tim Brown. “It’s a brutal tournament, and if you can rest your guys and steal minutes for them throughout this tournament, it’s definitely in your favor.”

Republic led 26-2 at the end of the first quarter. With several starters on the bench in the second quarter, Republic outscored Buffalo 15-9 to take a 41-11 lead into the halftime break.

“I thought our guys did a nice job of playing in transition. That’s been a point of emphasis of ours the last couple weeks,” said coach Tim Brown. “With a good guard like ‘Te and some athletes around him, we’ve got to be able to get a couple of easy baskets, and we’ve done a better job.”

In addition to Douglas’s 14 points, Republic had three others in double figures: Brenley Hagewood with 12, Askew with 11, and McMillin with 10.

Republic improves to 5-3. The Tigers advance to the quarterfinals to play the winner of Monday’s late game, Ava (3) or Stockton. That game is scheduled for 9:30 pm Tuesday. (Republic Tiger Sports will not have live video coverage of that game.)

Jordan Douglas got extra minutes when the Tigers built a big early lead against Buffalo, and he took advantage of his time on the floor. Douglas scored a team-high 14 points, including three three-pointers, to help the Tigers pull even further ahead. For his big offensive night, he’s our Farr Better Player of the Game.