There have been a lot of hot starts in Republic Tiger Sports this fall, but it’s hard to overlook what quarterback Avery Moody has accomplished early in the year. Moody has scored six touchdowns in the Tigers’ first two games – three against Neosho and three against Willard. He has carried the ball 25 times for 377 yards. That’s an average of more than 15 yards per carry. And in addition to that, he’s helped lead a Republic offense that is averaging about 480 total yards and 46 points per game.

Competing with a full complement of varsity runners, the Lady Tigers cross country team is already ahead of the pack when it comes to accomplishments for the program. The girls cross country runners won the Lebanon Invitational, and they did it in dominating fashion, with four runners in the top 10 and five in the top 20. It was the first team event title for the program in seven years. The Lady Tigers won their home meet in 2014 – a win that previous articles overlooked in calculating the last victory for Republic. That year, Brylee Manes, Destinee Tyk, and Madi Appleberry all placed in the top four at the Republic Invitational. Saturday, the Lady Tigers blew away the field, finishing with an average time of 21:59. The second-place team, Rolla, averaged 22:46. 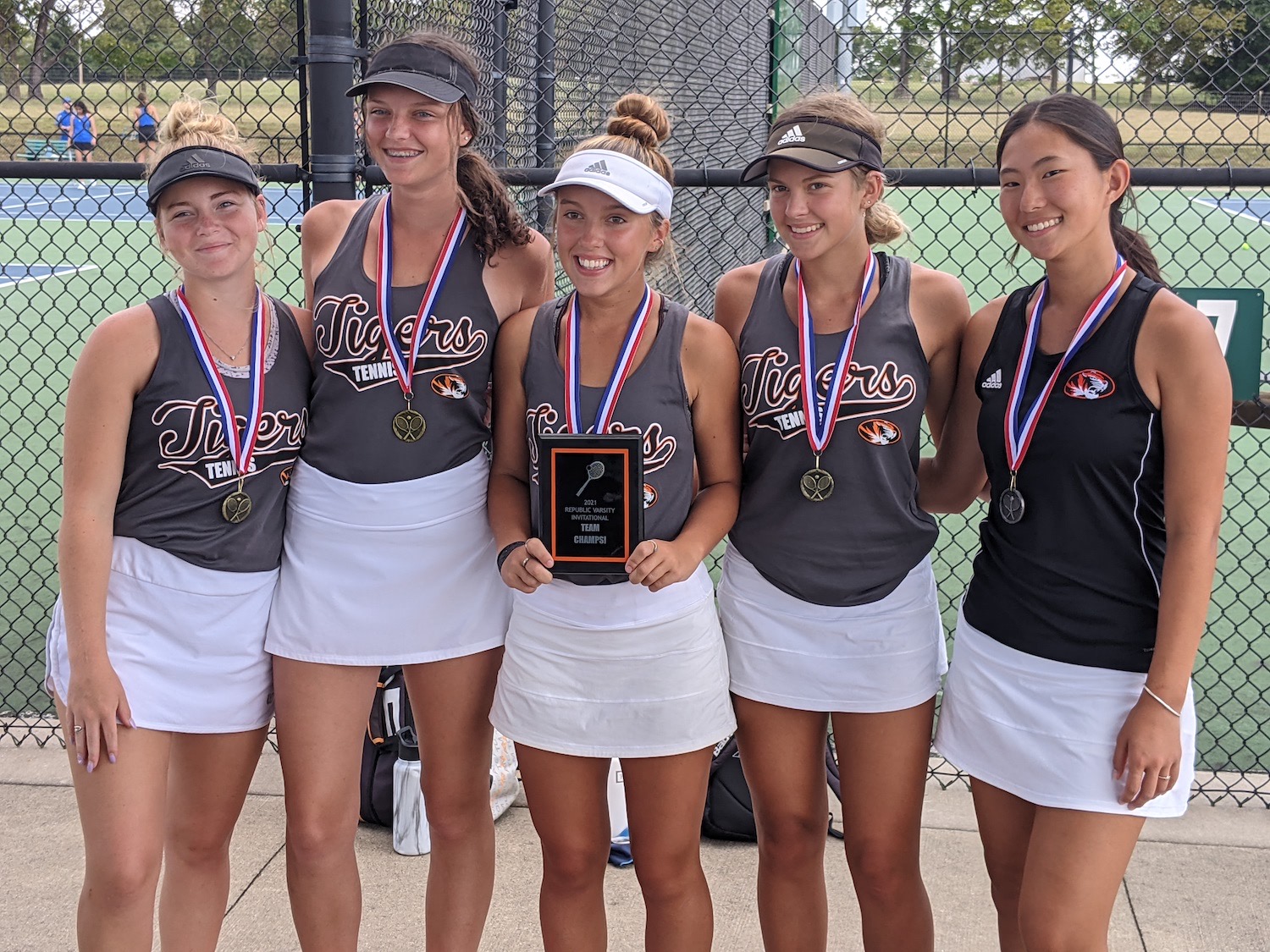 The Republic tennis team put an exclamation point on a busy and successful week Friday, dominating the competition and winning its home tournament for the first time ever. The Lady Tigers won the Republic Tournament by winning first place in #1 singles (Elsie Crawford), #1 doubles (Abby McCord and Morgan Lewis), and #2 doubles (Ashlyn Leonard and Mia Stan). Jasmine Howard made it to the finals of the #2 singles bracket, finishing second. Crawford didn’t even lose a game until the finals, which she won 8-1. Lewis and McCord gutted out two close victories to win their bracket. After opening with an 8-0 win against Rogersville, they beat Springfield Catholic 9-7, then topped Forsyth in the championship match, in a tiebreaker, 9-8 (7-5). In Flight 2 singles, Howard won her first two matches 8-0 and 8-1 before falling to Lila Griesemer of Springfield Catholic 8-1. Leonard and Stan won their opener 8-1, followed that up with an 8-5 win over Rogersville, then knocked off Paige and Rylee Starnes of Springfield Catholic 8-3 for the bracket title. The tournament victory capped a week in which Republic had already beaten three Central Ozark Conference opponents – Willard, Nixa, Joplin – on three consecutive days.

Before the season began, football coach Ryan Cornelsen said if Republic’s offense was clicking, several runners would have similar numbers by the end of the season. So far, that’s working out just fine. Running behind its out-sized but gutsy offensive line, Republic has four running backs with more than 250 rushing yards through five games. Quarterback Avery Moody leads the team with 588 rushing yards (7.44 per carry). Connor Sandridge has 458 rushing yards (7.39 per carry). Kanon Krol, who picks up most of his yardage with tough inside running at the heart of the defense, has gained 357 yards (4.82 per carry). And Ezekiel Meads has 283 rushing yards on just 41 carries (an average of 6.90). Among the contributors up front this season have been Derek Kabetske, Carter Nation, Tyler Burks, Mikah Erickson, Trysten Hart, and Max VanWyk, among others. Their work has opened holes that have allowed running backs to get into the secondary untouched at times. In all, Republic has 1,754 rushing yards at the midway point of the season. That’s an average of 350.8 yards per game. Over the past 12 years, Republic has averaged more than 300 yards rushing twice: in 2014 (about 310) and in 2015, Jerney Jones’ senior season (about 330).

No matter where she’s competing or what her opponents throw at her, Elsie Crawford keeps on winning. Crawford became Republic’s first multiple-season state qualifier since Kaitlyn Snyder when she dominated the individual district tournament Friday at Cooper Tennis Complex. Not only did Crawford win all four of her matches, she lost only two games in the process, finishing with a game record of 36-2 on the day. For Crawford, it was her second consecutive district championship, and it guarantees her a berth among the top 16 players in Class 3 when the state tournament is played in Springfield later this month. She and the rest of the Lady Tigers will have a second chance to qualify next week when the team district tournament begins. Republic is the #2 seed (behind Springfield Central) and opens at home against #7 Waynesville.

After missing the first few weeks of the season, it hasn’t taken Will Fronabarger too long to hit his stride. Fronabarger has stepped back into the scoring role envisioned for him by Coach Kevin Hauck before the season began, and the more he gets comfortable in the lineup again, the more he’s putting the ball in the next. In Republic’s last two wins, Fronabarger has scored five times: twice against Webb City in a 3-0 Republic victory, then three times against Rolla in a 4-0 win. His return to the lineup gives Republic a new dimension offensively, and it opens the door for at least a share of the conference championship if Republic can win the remainder of its COC games. 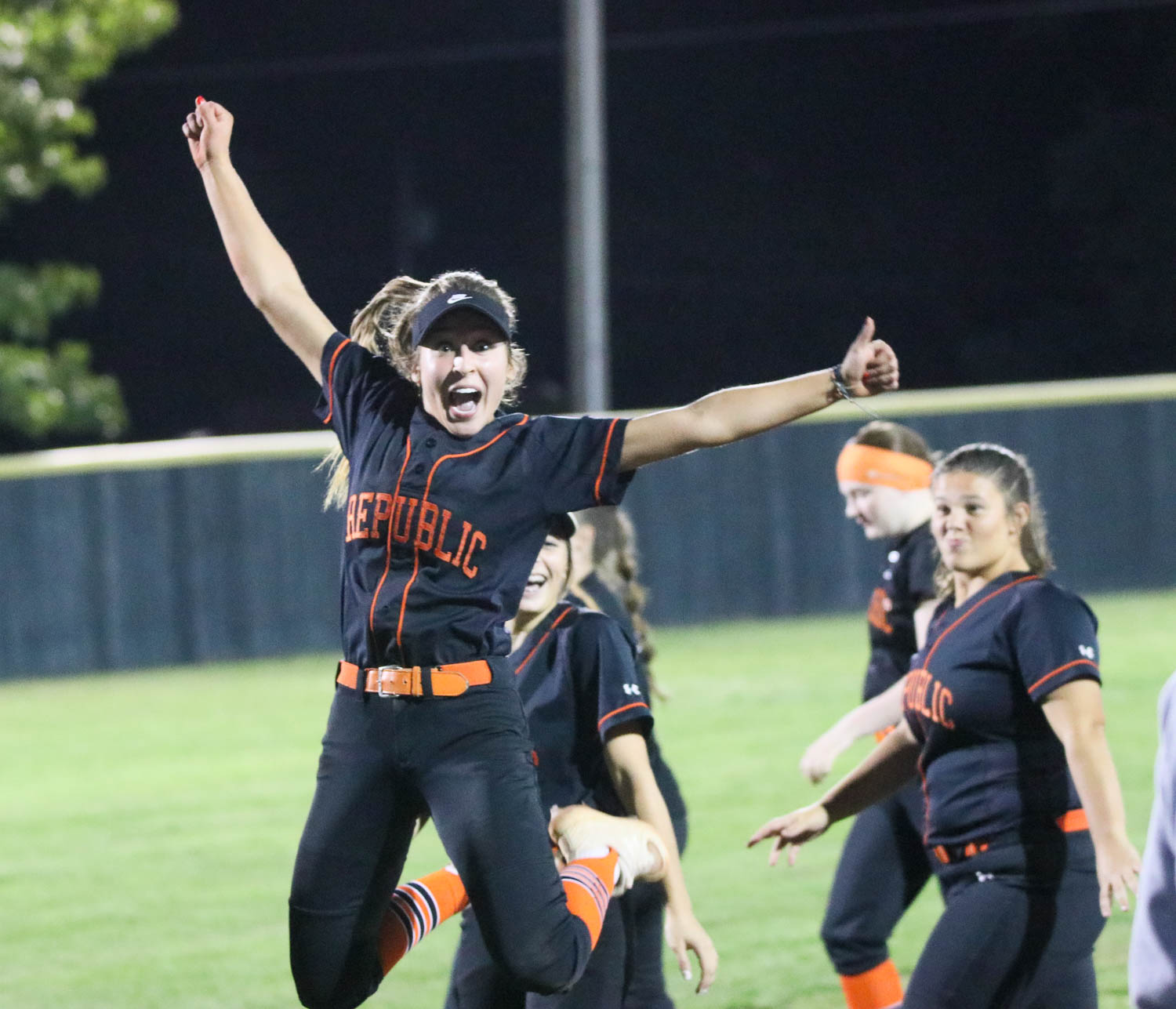 The season ended in a tough district semifinal decision for the Republic softball team, but center fielder Jenna Belcher finished her season on a high note. In two district games, Belcher slugged two home runs, including a long drive over the left field fence at Nixa that pumped new life into the Lady Tigers after they had fallen behind in the top of the first inning against Joplin. Her second home run, in the semifinals against Ozark, also jump-started the team after Republic had fallen into a 2-0 hole. Belcher was 3-for-6 with two home runs and a double in Republic’s two district games.

In a conference like the COC, with such a wide disparity in teams, it can be hard to judge how well a team is playing from one week to the next. But the scoreboard shows that Republic’s defense is playing better than ever over the last half of the season. During weeks 1-5, Republic’s defense allowed opponents to score right around their season average. The defense allowed 28 points per game, and those five teams – Neosho, Willard, Webb City, Nixa, and Ozark – are averaging about 27 points per game overall. But the last four games are a different story. The Tigers have held the last four opponents – Joplin, Carl Junction, Carthage, and Branson – more than a touchdown below their scoring average. Republic has allowed 21.5 points per game in that span, and those four opponents are averaging 30 points per game overall.

The Republic girls cross country team has never been hotter than it is right now. That’s because the team has qualified four individual runners for the state meet this Friday in Columbia. Miha Nambara, Gracie Troester, Kristin Probst, and Misora Nambara will all represent Republic when the starting gun fires at noon at the Gans Creek Cross Country Course. It’s the most runners ever for a Republic cross country team at the state meet. And the team barely missed qualifying as a group, losing out on a tiebreaker after tying with two other teams for third place. In addition to the four girls competing at state, Ethan Haynes will be representing the boys team at state. He’ll run at 11:15 a.m.

Earlier this season, Republic swimmer Bryce Martin took an optimistic view of the Tigers’ small roster. Down to three swimmers and unable to swim in relay events, the Tigers were able to concentrate their efforts. “In a way, it’s helping. We can focus more of our energy towards our individual (events),” Martin said. That turned out to be prophetic, because all three Republic swimmers used that concentrated effort to earn slots in the state swimming championship to be held this week at St. Peters. Martin will swim in two events, and Seth Lock and Brady Lewis will each swim in one. Preliminary events will be held Thursday.