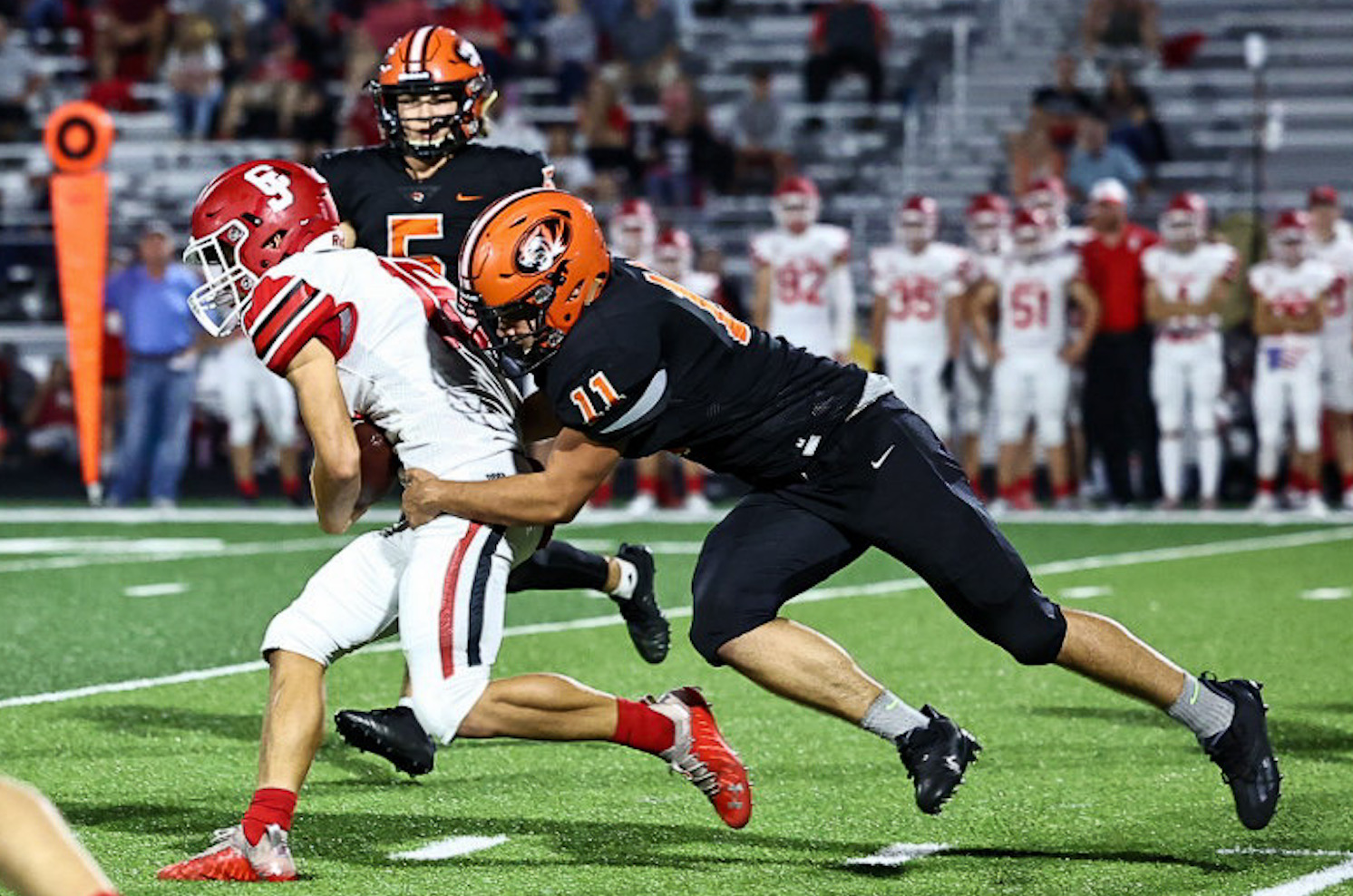 Tigers Lower the Boom on Bulldogs

One of the best rushing attacks in the Central Ozark Conference went head-to-head with one of the league’s best rushing defenses, and it was the Republic offense that won the night. But as good as the Tigers’ rushing game was in a 37-3 victory over Carl Junction, the defense may have been even better. Republic dominated the line of scrimmage on both sides of the ball, out-gaining Carl Junction 420 yards to 116. Carl Junction had -1 total yards in the second half.

“That was one of the better run defenses we’ve seen, as far as the run, and some of the things we worked on during the week, the kids did a good job of executing them and opening things up,” said coach Ryan Cornelsen. “The defense played amazing. They came up with some huge stops and bailed us out on some big plays. Keeping (Carl Junction) out of the end zone in the first half was huge. I thought the kids played by far their best overall game.”

The defense turned in the first big play of the night, when Carl Junction fumbled the ball on its opening drive and Cooper Douglas recovered. Republic gained only three yards before Marco Donjuan converted it to three points on a 34-yard field goal.

The defense got another stop on the Bulldogs next drive and scored again on a six-play, 81-yard touchdown drive. Avery Moody completed his first touchdown pass of the season, finding Gunner Ellison on a 37-yard strike to make it 10-0.

The Bulldogs got their only points of the game on their next drive – kicking a 35-yard field goal to make it 10-3. That was as close as they would be all night.

Republic’s defense was in the Carl Junction backfield all night. The Tigers had ten tackles behind the line of scrimmage, including four quarterback sacks. They forced the Bulldogs to punt after three plays on their next two possession, while the offense kept getting better.

A 12-play, 68-yard drive, capped by a five-yard TD run by Moody, put Republic on top 16-3, and Marco Donjuan missed his first extra point of the season. The Tigers scored again on their next drive, thanks to a 50-yard touchdown romp by Moody. The extra point made it 23-3.

Carl Junction’s biggest scoring threat of the night came right before halftime, but Republic’s defense got another key stop. With three seconds left and the ball on the eight yard line, Carl Junction threw the ball into the end zone, but Moody and Zion Allen broke it up as time expired.

Moody had a role in all five touchdowns. He rushed for 227 yards and passed for 37.

“I thought read the option really well. (It was) probably his best game of reading it and understanding it,” said Cornelsen.

In Ellison’s first varsity start at running back, he rushed for 44 yards and caught a 37-yard TD pass. Kanon Krol had 11 carries for 40 yards. Sandridge had nine carries for 54 yards.

Republic improves to 4-3. It’s the Tigers’ first four-win season since 2015, when they finished 6-5. It’s also the first time Republic has beaten Carl Junction since the Bulldogs joined the Central Ozark Conference.

Republic travels to Carthage next week.