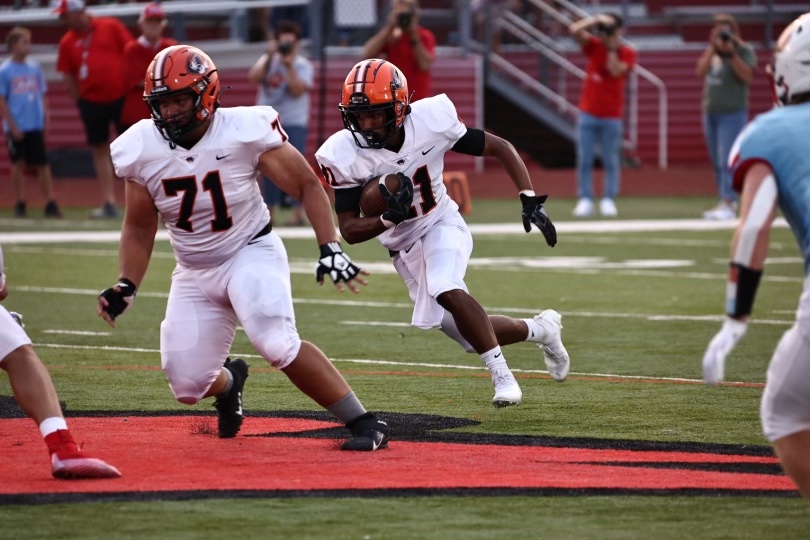 Ezekeil Meads runs behind Micah Erickson in the first half. Meads finished with 27 yards rushing on nine carries.

The Webb City Cardinals didn’t put together many sustained drives against the Republic defense Friday night, but that’s because they didn’t need to. The Cardinals had six plays from scrimmage of 35 yards or more on their way to a 56-20 win in Webb City. They scored on six of their seven drives in the first half, jumping to a 28-0 lead before Republic crossed the goal line.

“I felt like our kids played hard. We didn’t play assignment-sound. I’ve tried to explain to them, we’ve got to be very, very assignment-sound against good teams, and we weren’t,” he said. “We were undisciplined, and they had about whatever wanted, whether it’s offense, defense, special teams.”

The Tigers had brief successes, but weren’t able to sustain much offensive momentum. They had one nine-play drive and one six-play drive that ended without a score in the first half. They finally got on the board with a 10-play, 63-yard drive that ended with a one-yard touchdown plunge by Avery Moody. His TD was set up by a 38-yard run by Connor Sandridge.

But it took Webb City less than a minute to respond on a 41-yard TD pass from Cohl Vaden to William Hayes. And when Republic fumbled the ensuing kickoff, the Cardinals were set up for another score. They led 42-6 at halftime.

The teams traded touchdowns in the second half, with Webb City taking a 49-6 lead before Republic scored again. The Tigers drove 58 yards on 11 plays, highlighted by a 39-yard pass from Gavyn Beckner to Chase Buford. That put the ball inside the ten yard line, and Moody eventually scored on a two-yard run to make the score 49-12.

After another Webb score, the Tigers put together an eight-play, 70-yard drive that ended on a two-yard run by Kanon Krol. A two-point conversion by Moody made the score 56-20, where it ended.

Both teams are 2-1. Republic hosts Nixa next week.

“You’ve got to move on. That game doesn’t define us, but how we respond to it does,” Cornelsen said. “Nobody said we were going to all of a sudden change overnight. It takes work, so we’ll see what our mentality is on Sunday at film and Monday at practice. Hopefully everybody comes back with the attitude that we’ve got to get better, and we’ve got to work. If we do that, then this game might have been the butt-kicking we needed to get us going in the right direction.