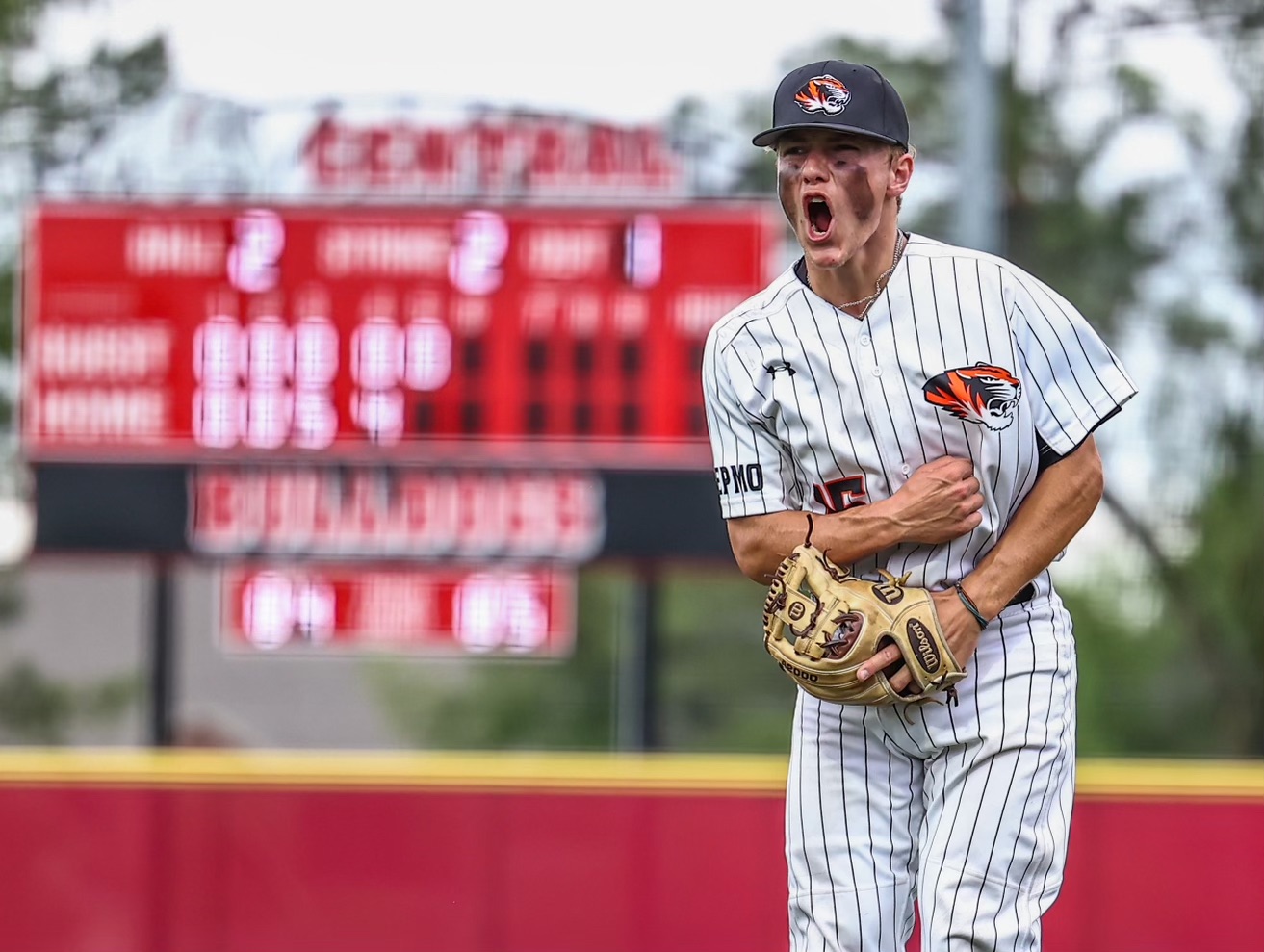 Vincent Pyeatt pumps his fist after the Tigers turned a double play to get out of a jam during Monday’s 10-0 shutout. (Photo by Steve Rackley / Flat Top Photos)

The Republic baseball team broke a scoreless tie, then broke two school records on the same play during a five-run third inning, on the way to a 10-0 win in the first round of district play against Carthage Monday.

Vincent Pyeatt pitched a six-inning shutout – his second shutout in a week – to help the Tigers advance to the district semifinals Wednesday. He also got the scoring started for Republic in the bottom of the third, after Bryce Messier singled and Richard Potter walked to start the inning. Pyeatt’s line drive single scored Messier to give Republic a 1-0 lead. Another run scored when Gavyn Beckner reached on an error, then Ryker Hill drew a walk to load the bases, setting up Republic’s record-setting play.

As Jared Hughes came to bat, he needed three RBIs to break the single-season school record of 35. Harrington, on first base, needed to score one run to break the single-season record in that category. Hughes lined a single into the outfield, easily scoring two runs. But as Carthage returned the ball to the infield and third base coach Curt Plotner watched his players celebrate near home plate, Harrington just kept running. He rounded third base without hesitation and scored before Carthage’s infield could react, breaking the runs record and giving Hughes the third RBI he needed to break that mark. That made the score 5-0. (The record-breaking play starts around the 1:36 mark in the highlight video below.)

Republic put the game away with four more runs in the fourth inning. Pyeatt and Harrington each singled home a run, then Kyle Hill singled to knock in two more, making the score 9-0.

Republic finished out the game with a run in the bottom of the sixth inning when Jared Hughes was hit by a pitch with the bases loaded.

Pyeatt pitched six innings, allowing no runs and just four base hits. He walked five and struck out five to pick up the complete-game win. Pyeatt also went 2-for-3 with a walk, scored three times, and drove in two runs.

Hughes had four RBIs, and Harrington and Beckner each scored twice. Hughes has 37 RBIs, breaking the record of 35 previously held by Thomas McPhail and set in 1999. Harrington has scored 41 runs, eclipsing the previous mark of 39, set by Garner in 2006.

Republic is 19-0. The Tigers will go for 20 wins in the district semifinal Wednesday at 7:00 against Nixa (3) or Ozark (6). Their quarterfinal game, the last of the day Monday, was delayed by weather.

Vincent Pyeatt didn’t even know he was going to pitch the district opener until early on game day – but it didn’t seem to bother him at all. Pyeatt threw his second shutout of the season – and his second in a row – allowing just four hits in a six-inning win. He also reached base three times in three plate appearances, scored all three times, and drove in two runs. For his all-around performance, he’s our Farr Better Player of the Game.