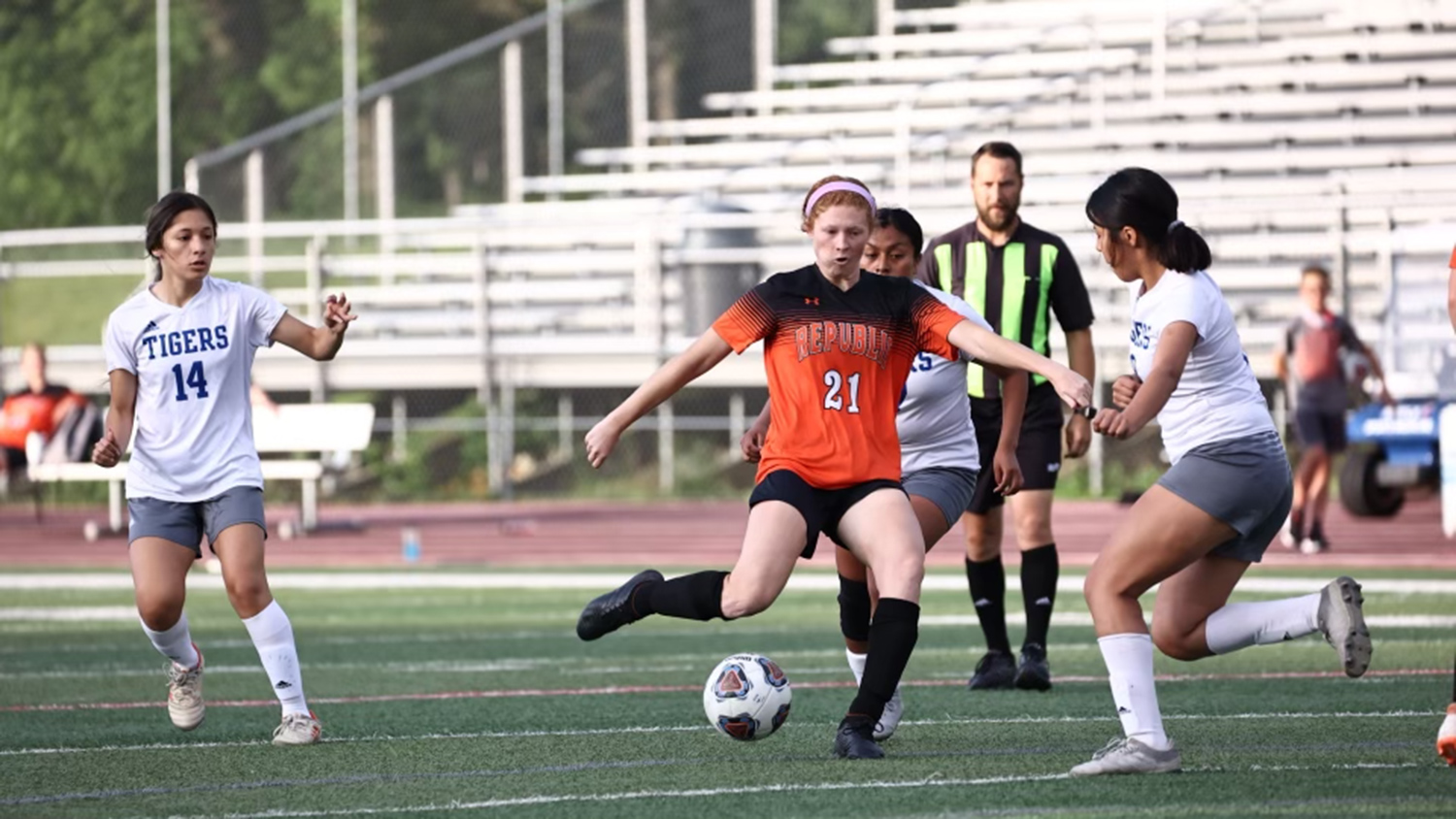 Lady Tigers Hold Off Carthage to Advance to District Finals

After dominating Carthage 6-1 in the regular season, coach Kevin Hauck told his Lady Tigers soccer team things would be different this time around.

A second-half goal by Clara Fronabarger made the difference for Republic, which advanced to the district finals with a 4-3 win Tuesday night. Fronabarger also assisted on Republic’s three other goals, giving her 22 assists for the season. That surpasses the 19 assists by Emily Jordan during Hauck’s first season in Republic.

Republic twice grabbed a two-goal lead in the first half, only to see Carthage claw its way back into contention. Regan Holmes scored first, popping the ball over the Carthage goalkeeper before the two collided. The ball bounded into the net from about 15 yards out to make the score 1-0.

Republic went on top 2-0 when Fronabarger fed the ball from midfield to the right side of the goal box, where Molly Blades tracked it down. She right-footed the ball out of the air and up over the arms of the Carthage keeper, who got her hands on it, but not enough to keep the ball from trickling over the goal line.

Carthage got back in the game after an inadvertent hand ball by Republic resulted in a penalty kick, making the score 2-1.

Fronabarger and Holmes teamed up to put Republic back on top by two goals late in the first half. Fronabarger took the ball away from two Carthage defenders in the midfield, weaved in and out of traffic, left one defender on the turf, drew another toward her, along with the goalkeeper, then pushed the ball to Holmes in the middle of the box for a straight-in goal from less than ten yards out. That put Republic ahead 3-1, but Carthage scored again with just under three minutes remaining in the half, and Republic took a 3-2 lead into halftime.

When Carthage scored three minutes into the second half, it tied the score 3-3 and signaled that the game would be a dogfight the rest of the way. And it was – but a spectacular shot by Fronabarger put Republic ahead for good.

As Carthage’s defense tried to clear the ball near the left sideline, just ten yards from the goal line, Fronabarger took the ball away. With her momentum taking her away from the goal, she turned and fired it across the face of the goalkeeper, depositing it into the right side of the net. It gave Republic the lead 4-3, and that’s the way the game ended.

Even though Republic managed just one goal after halftime, Hauck said he thought his team showed more life in the final 40 minutes.

“The first half, overall, I thought we were a lethargic out there – just kind of a little slower [than Carthage). But in the second half, I thought we held tight and we did what we needed to do to be able to finish out the game. And that was the key.”

Fronabarger played a role in all four goals, and Hauck said her 22 assists this season are an indication of how selfless she is.

“Clara loves getting other players involved, and she’s so unselfish. I’m just so proud of the way she plays a game. And she did a great job, and the girls did a great job finishing for tonight,” Hauck said.

Tyra Campbell remained the backbone of the defense, turning away several good Carthage opportunities, including two in the final two minutes.

“Tyra was huge for us. She played so fantastic out there tonight, and she’s done it all season,” Hauck said. “She’s never played center back, and I just kind of put her in that role and said, ‘Hey, you’re, you’re our leader back there,’ and she’s done such a great job at it. She made two extremely big plays at the end of the game tonight … to hold them off, and I’m just really proud of her.”

Republic improves to 14-9. The Lady Tigers will play top-seeded Nixa for the district championship at 6 pm Thursday.

When Clara Fronabarger knocked in the game-winning goal from a nearly impossible angle in the second half, it showed why she’s one of the best scorers in southwest Missouri. When she assisted on Republic’s three goals in the first half, it demonstrated why she’s one of the best teammates in the area, as well. Fronabarger did a little bit of everything Tuesday, getting her teammates involved in the offense and anchoring the middle of the field at times, and for all that, she’s our Farr Better Player of the Game.