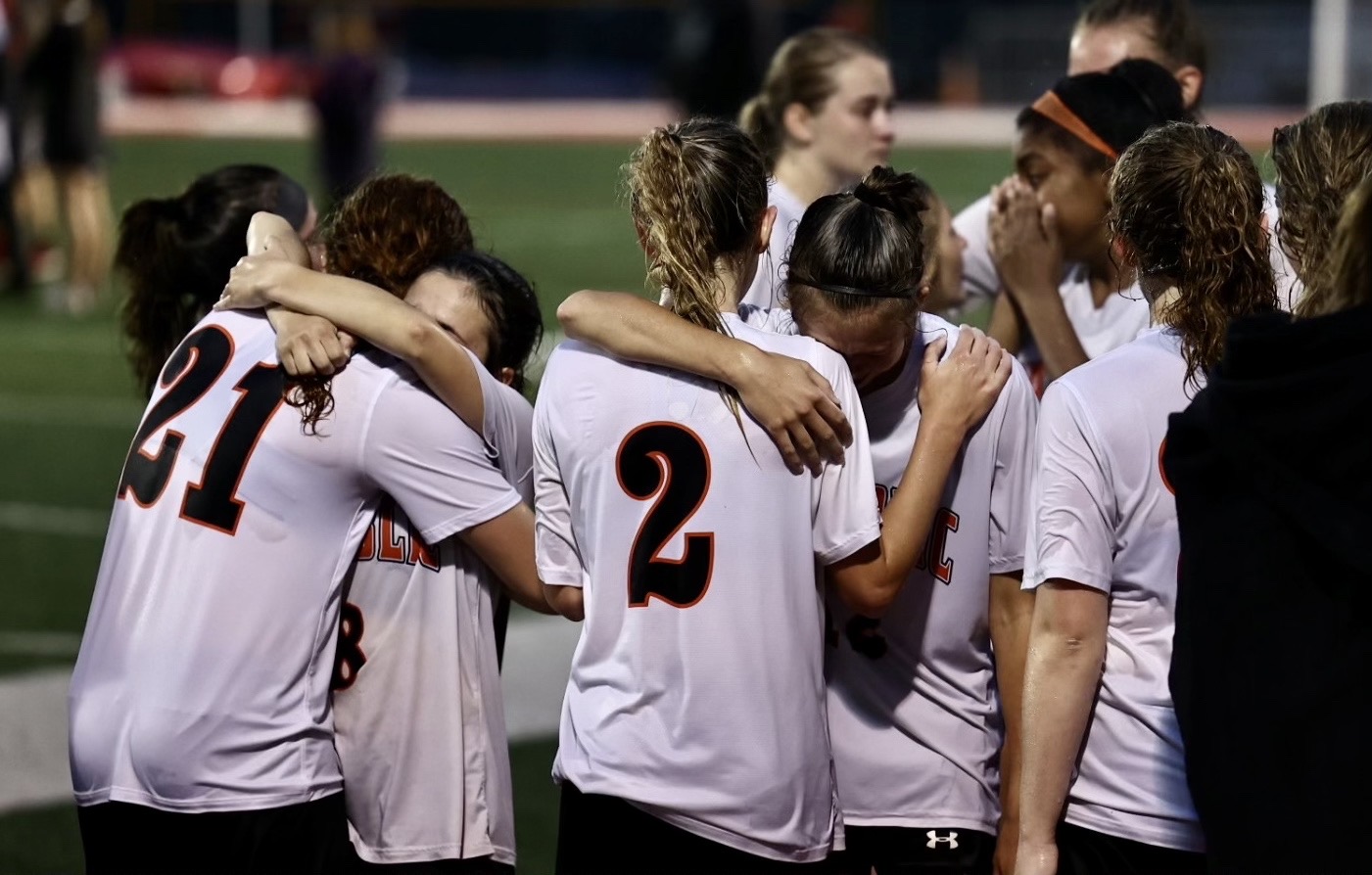 The Lady Tigers console each other after two late goals helped Nixa sneak away with a district championship. (Photo by Steve Rackley / Flat Top Photos)

Through the first 64 minutes of play in the district championship game, it looked like Republic was ready to overcome more than a decade of frustration against Nixa. Playing in a driving rain, the Lady Tigers led Nixa 2-1. Clara Fronabarger had scored twice, and Nixa’s only goal had come on a second-half penalty kick after a disputed hand ball call in the goal box.

After Nixa’s goal had tied the score 1-1 early in the second half, Republic seemed to have regained its confidence and had begun to play its game again. Fronabarger scored her second goal to put Republic up 2-1, and the Lady Tigers were doing a better job of controlling the ball. Graci Coleman was turning in a career night in goal. Then lightning struck.

A flash of lightning forced a sudden delay in the game with 16 minutes remaining, sending both teams to the locker rom. When the teams returned a half-hour later, Nixa dominated. The Lady Eagles tied the score just two minutes after play resumed. And seven minutes later, they scored again to seal a comeback, 3-2 victory and win the Class 4 District 11 title.

After the game, an emotional Kevin Hauck said he told his players he was proud of the way they competed after losing 5-1 to Nixa during the regular season.

Republic had taken a lead in the first half when Clara Fronabarger booted in a spinning, left-footed shot from 25 yards away. Her goal made the score 1-0. Nixa had missed an earlier penalty kick that would have put the Lady Eagles on top.

The score remained 1-0 until early in the second half. Nixa came out more aggressively, putting pressure on the Republic defense from the opening seconds. But after their goal tied the game, Fronabarger answered, and Hauck felt good about the way his team was playing.

“I felt like after we allowed that one in, then we got it back (on Fronabarger’s second goal), we were figuring out our rhythm on how to defend. Lightning struck – there’s no doubt about that _ and it got us in a pause, and unfortunately, when we came back out, they were able to find a couple of gaps on us and they made it count,” he said.

Almost every season ends with a difficult loss for every coach, but Hauck said this is among his hardest.

“This one’s pretty tough, because I thought we put ourselves in a good position. Both teams really battled the weather, and then it’s just unfortunate, I thought (the delay) just took us out of the game a little bit. Both teams had to deal with it, though. I just would have liked to continue playing straight through if the weather had permitted it,” he said.

“There’s a lot to remember,” Hauck said of the senior class. “They were a fun group to coach. They have set some high expectations for this program. Most of them have started since freshman year,” he said. “Every single one of them has been such a great leader for the younger class. They just show them how to conduct and handle themselves moving forward, and I think that makes our program stronger each year, and allows us to compete for district titles and against some of the best teams in the area.”

One final time in a Republic uniform, Clara Fronabarger showed why she’s one of the best. Her first goal, a spinning, left-footed miracle from far out, gave Republic the lead in the first half. Her second goal, pooched over the head of an advancing goalkeeper, gave Republic the lead again after Nixa had tied the score. And after Republic gave up two late goals to watch its season slip away, Fronabarger was on the sideline encouraging younger teammates who will be back next year. For all of that, she’s our Farr Better Player of the Game.