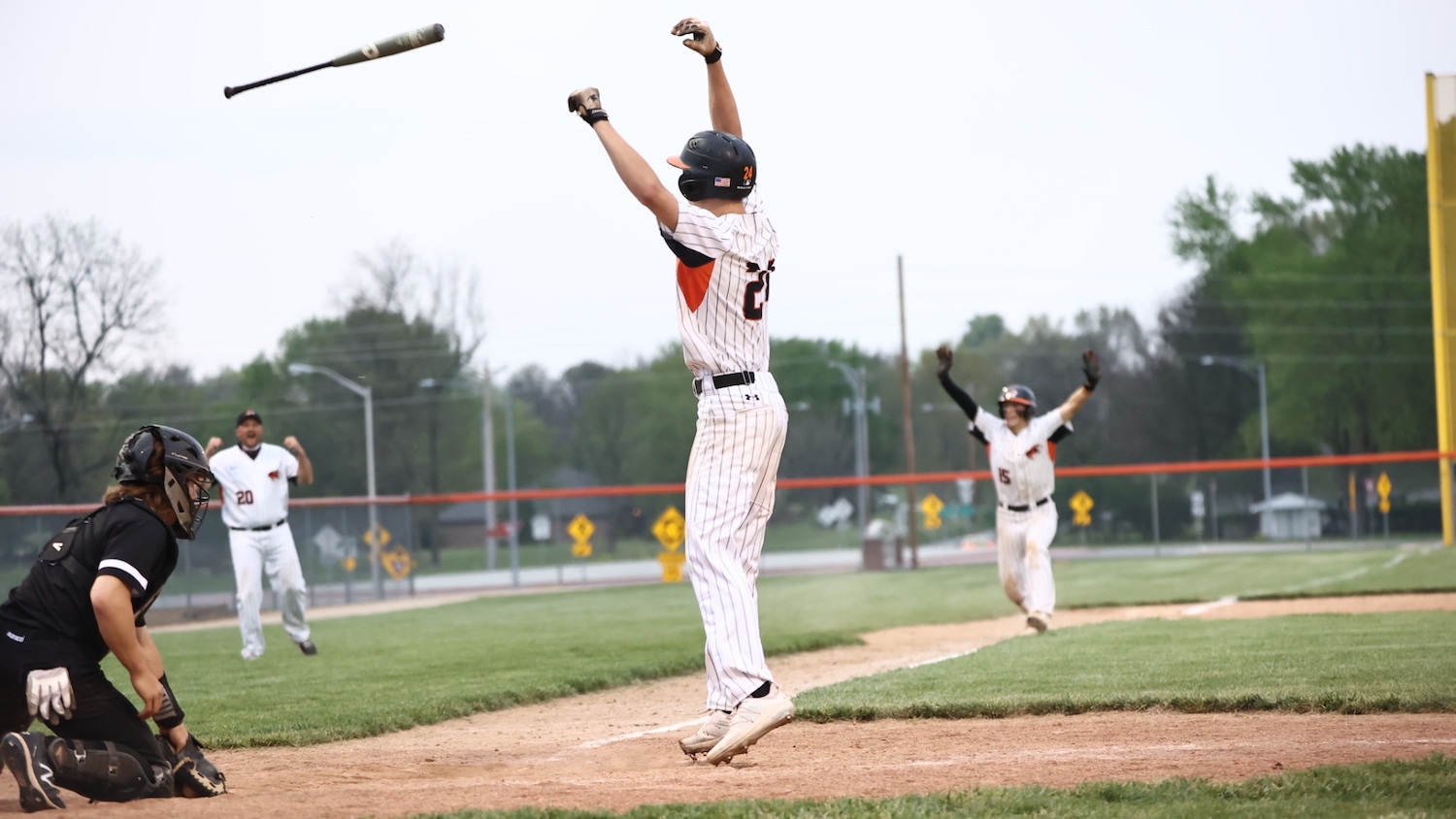 Jared Hughes flips his bat away after drawing a bases-loaded walk to win the game in the 10th inning, as coach Curt Plotner and baserunner Vincent Pyeatt celebrate. (Photo by Steve Rackley / Flat Top Photos)

Tigers Persevere, Knock Off #1 Willard in 10

They say to be the best, you’ve got to beat the best.

The Tigers came from behind with three runs in the bottom of the seventh inning, then scored a single run in the tenth to beat Willard, the #1 team in Missouri Class 5, 10-9. The win kept Republic’s hopes for a Central Ozark Conference championship alive, moving their COC record to 6-0.

Richard Potter had the big blast in Republic’s comeback 9th inning. Batting with two outs and two runners on base, he walloped a double to the fence in left center field to score Jared Hughes and Bryce Messier, tying the game 9-9.

“It’s the biggest (win) we’ve had since I’ve been her, for sure,” said coach Curt Plotner. “They were the number one team in the state in Class 5, so credit to our guys for hanging in there and battling – being down three runs in the seventh and finding a way to push three across.”

Potter’s heroics may never have happened if not for Hughes’s big day on the mound. Hughes relieved Gavyn Beckner to start the top of the fourth inning with Willard on top 8-6. He proceeded to strike out 11 batters over the next five innings, allowing just one run in the top of the fifth inning that made the score 9-6.

The Tigers had pounded out eight base hits and drawn three walks in the first two innings, driving up the pitch count of Willard starter Dalen Stewart. That early success paid off when Stewart hit his pitch limit after retiring one batter in the seventh inning. Kyle Hill tripled with one out and Jared Hughes walked. After Brady Usgaard drove in a run with a sacrifice fly, left-handed batter Bryce Messier drew a walk off lefty Klayton Kiser to put the tying run on first base. Willard’s third pitcher of the inning, Evan Gaunt, allowed Potter’s game-tying double.

In the eighth inning, both teams wasted chances. The first two batters reached for Willard, but Hughes worked out of trouble without allowing a run. Republic loaded the bases with one out, but Hughes lined into a double play to end the inning.

Ace McWatters shut down Willard for two innings in the ninth and tenth, and Vincent Pyeatt led off with a walk in the bottom of the tenth. Gavyn Beckner singled, and both runners advanced on a groundout by Ryker Harrington. Willard intentionally walked the bases loaded to get to Hughes, and Hughes drew a walk to force home the winning run.

The Tigers left the bases loaded in the first, had a runner picked off in the third, and lost another runner trying to advance to third base in the same inning. The eighth-inning double play was also a killer. But Republic won anyway.

“I think that’s a sign of us maturing a little bit,” Plotner said. “Maybe in the past, we would have rolled over in some of those spots and just given up, but our kids were hungry.”‘

McWatters picked up with win with two scoreless innings in relief. Evan Gaunt took the loss for Willard.

Pyeatt had three hits and scored three runs for the Tigers, and he also walked twice. Beckner, Harrington, Hill, and Hughes had two hits apiece. Both of Hill’s hits were triples. Republic left nine runners on base, and Willard left 12 runners on.

Republic is 14-6 overall. That’s the best start in more than a decade for the Tigers, who host Joplin in another COC game Thursday. Republic Tiger Sports will stream that game live.

Note: Because of wet field conditions in Republic, the game will be played on the turf in Joplin. And because of the move, we will NOT stream the game live.

Jared Hughes didn’t start pitching until the fourth inning, but he had one of the best pitching performances in recent memory for the Tigers. Hughes pitched five innings, allowed one run, and struck out 11 batters. He allowed six hits and didn’t walk a batter. Not only that, but after he left the mound, he stayed in the game at first base and drew the bases-loaded walk that won the game for Republic. For all of that, he’s our Farr Better Player of the Game.