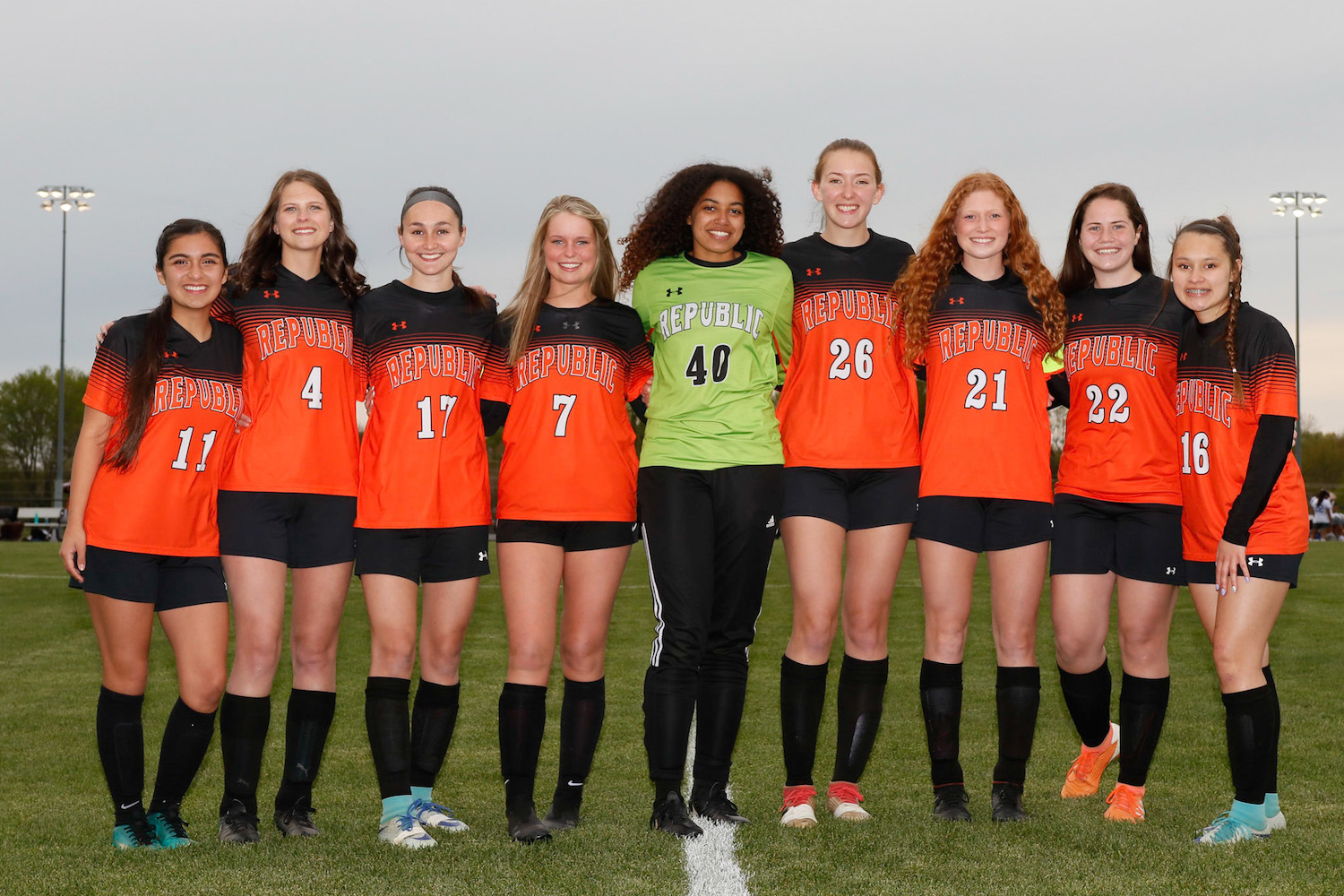 Now that’s the way you start a Senior Night.

Clara Fronabarger took the opening kick and bolted forward, sprinting through the Carthage defense and booting the ball into the net after just 14 seconds had elapsed to give Republic a 1-0 lead. Thirty seconds later, Fronabarger banged the ball off the crossbar, and even though it ricocheted away, it set the tone for the rest of the night in a 6-1 win over Carthage.

Only seven players in state history have scored a goal faster to start a game than Fronabarger.

Republic took the 1-0 lead into halftime, but they dominated the rest of the first half, despite failing to score again.

Six minutes in, seniors Sarah Hicks and Alicyn Hernandez had good scoring opportunities that just missed. Senior Regan Holmes fired two shots in the 11th and 12th minutes, both saved by Carthage’s keeper. Another Fronabarger shot veered wide right in the 16th minute, and a minute after that, it took a diving save to stop another Fronabarger shot.

But in the second half, it didn’t take long for the floodgates to open for Republic. Fronabarger scored on a penalty kick after being taken down in the goal box, then sailed a free kick from the right wing into the top-left corner of the net a few minutes after that, making the score 3-0. Fronabarger scored her fourth goal with 24:07 remaining to give Republic a 4-0 lead.

Regan Holmes scored on a penalty kick with 24:00 remaining and Erin Brown tucked the ball into the corner of the goal with 21:00 remaining to make it 6-0.

Carthage got a goal with 19:53 left in the game, but that ended the scoring for the night, allowing Republic to celebrate a lopsided Senior Night victory.

“This senior class has been really special from the beginning. A lot of them have started since they were freshmen, and if they haven’t started, they’ve been playing at the varsity level,” said coach Kevin Hauck. “they’ve really helped build this program up – giving us a lot of stability, teaching the younger girls how to do things the right way, teaching them how to work hard in practice and work hard in games.”

Hauck only had the opportunity to coach this year’s seniors for three seasons because of the cancellation of the 2020 season. That increases his appreciation of having one more chance to work with them.

Republic improves to 9-5 overall. The Lady Tigers are 4-0 in the Central Ozark Conference and have outscored their COC opponents by a combined score of 24-1.

Clara Fronabarger has scored a lot of goals for the Lady Tigers, but none faster than the one she scored to start the game against Carthage Thursday. Fronabarger put the ball into the net after just 14 seconds had elapsed. That’s the eighth-fastest goal to start a game in state history, according to the Missouri State High School Activities Association record book, and the fastest goal ever scored in Central Ozark Conference play. She added three more goals later in the game, and she’s our Farr Better Player of the Game.