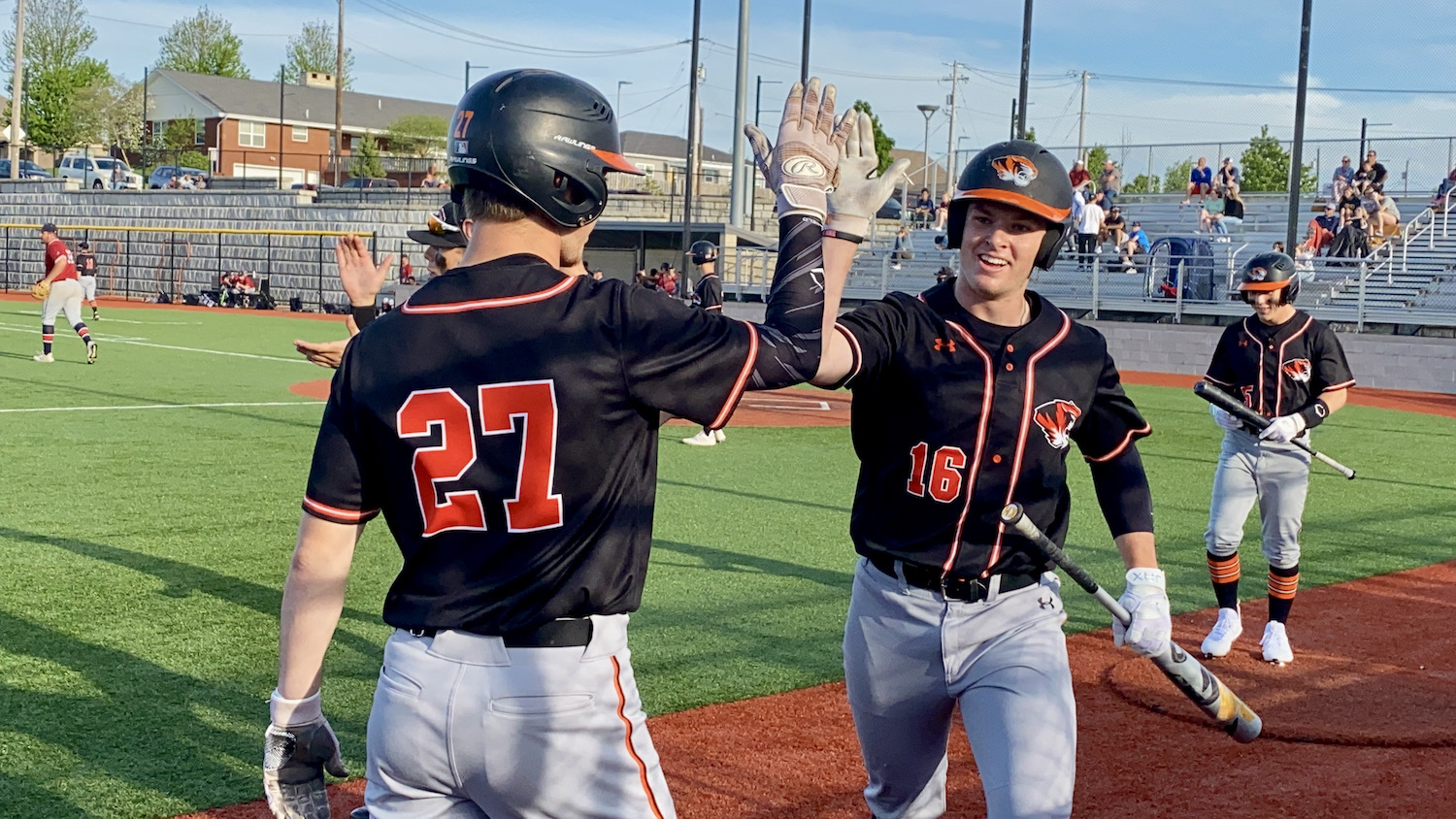 Ryker Harrington walloped a moonshot two-run home run, and the Tigers overcame an early deficit to win their eighth game in a row, 5-3 at Joplin. Vincent Pyeatt picked up the win and Cole Iles earned the save with stellar relief work, as Republic kept its Central Ozark Conference record perfect at 7-0.

Joplin grabbed an early lead in the first inning when Pyeatt walked in a run, but the Eagles missed an opportunity to do more damage when they left the bases loaded.

Republic took the lead for good in the top of the third on Harrington’s fourth home run of the year. Gavin Walker was hit by a pitch leading off the inning but was caught stealing. Gavyn Beckner doubled with two outs, bringing up Harrington, who blasted a high, towering homer over the right field fence. It appeared to sail over the 20-foot retaining wall beyond the fence, as well.

The Tigers added two more runs in the fourth inning. Brady Usgaard singled to lead off, Bryce Messier walked, and Richard Potter singled to load the bases. That brought up Gavyn Walker, who ripped a double into right field, scoring Usgaard and Messier. The Tigers were unable to score any more in the inning, but led 4-1.

But Joplin immediately got the two runs back in the bottom of the fourth when Pyeatt lost his command of the strike zone. Joplin got a leadoff single and took advantage of three walks by Pyeatt to score a run. With the score 4-2 and the bases loaded, Cole Iles entered the game in relief. He gave up an infield single that scored another run, making the score 4-3, but coaxed a fly ball out of the next hitter to retire the side and end the jam.

Republic missed an opportunity in the fifth inning, leaving the bases loaded without scoring. But after Iles retired Joplin 1-2-3 in the bottom of the fifth, the Tigers added an insurance run in the sixth. Harrington hit a two-run double, and Kyle Hill followed it up with a single to right field. Harrington held up rounding third, but got too far off the bag and got caught in a rundown. The Tigers caught a break when Joplin’s catcher threw the ball away, allowing Harrington to score and giving Republic a 5-3 lead.

Iles retired the Eagles in order in the sixth inning, and in the seventh, he pitched around a two-out single to close out the game.

Pyeatt, the winning pitcher, worked 3 2/3 innings, allowing three runs on three hits. He walked six and struck out five. Iles earned the save by pitching 3 1/3 shutout innings. He allowed only two hits, didn’t walk a batter, and struck out four.

The Tigers are 15-6 overall. They are 7-0 in the Central Ozark Conference, and with Nixa’s loss at Webb City Thursday, Republic clinched at least a share of the conference championship. The Tigers can clinch an outright COC title with a win over Nixa at home next Tuesday.

The Tigers didn’t do much their first time through the batting order, but that all changed the second time around – and Ryker Harrington delivered the exclamation point. Harrington belted a long home run – his fourth of the season – that gave Republic a lead they would never relinquish. With the game still tight in the late innings, he also doubled and scored an insurance run that gave the Tigers a cushion, and he’s our Farr Better Player of the Game.