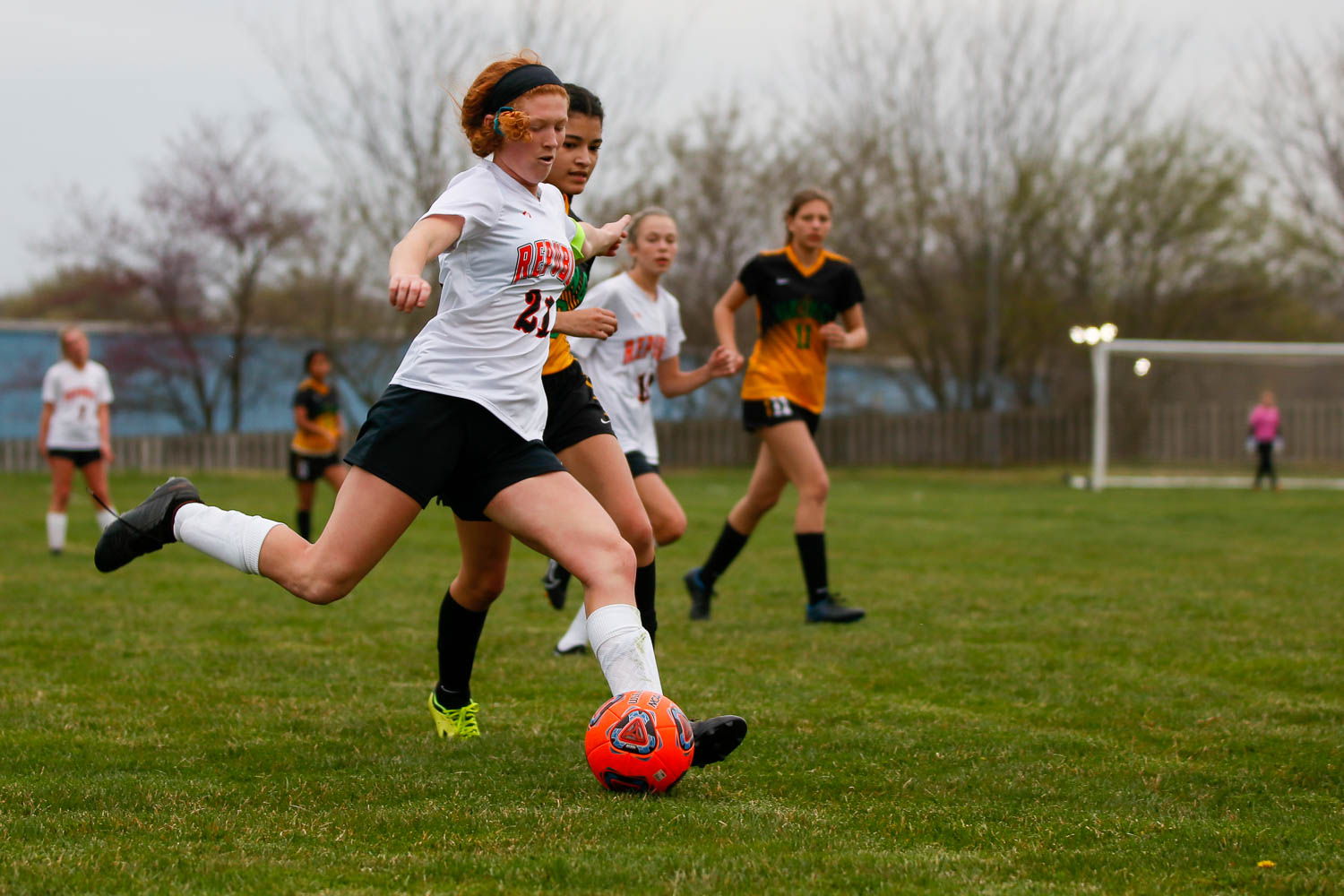 One Foot Away: Repmo Soccer Comeback Just Misses the Mark

With less than a minute remaining and Republic trailing 5-4, Sarah Hicks sprinted toward the left corner of the goal. At the same time, teammate Clara Fronabarger fired a rocket of a cross toward the left post. But as Hicks lunged toward the ball with her right foot, it passed just in front of her, wide of the goal, ending Republic’s furious comeback effort and resulting in a 5-4 win for Sedalia Smith-Cotton. That final play of the game was indicative of the fast-paced play in one of the most action-packed Lady Tiger soccer matches in recent memory.

Republic’s loss could be marked down anything but effort. Smith-Cotton, now 7-0 this season, had seized control of the game by scoring three goals in a five-minute stretch, starting around the 14th minute. Adamaris Ramirez scored the first two, and Ally Woolery scored the third.

But Republic didn’t quit. Just two minutes after Smith-Cotton scored its third goal, Fronabarger for the Lady Tigers on the board. She lined up for a free kick about 35 yards away from the goal line, and she sailed it into the upper right corner of the goal – in just about the only spot it would have eluded goalkeeper Peyton Kuhlman – making the score 3-1.

After Zoey Hieronymus made the score 4-1, Republic answered again. This time, it was Molly Blades, who picked up a deflected ball five yards out, dribbled to get free, and tucked the ball into the left side of the goal to cut the Smith-Cotton lead to 4-2.

Republic dominated the action in the early minutes of the second half, but failed to capitalize. And Smith-Cotton again seemed to put the game out of reach when Woolery took advantage of a Republic penalty in the box to score on a penalty kick, giving her team a 5-2 lead with less than 13 minutes remaining.

Fronabarger scored her second crazy goal of the game with nine and a half minutes remaining. She took a throw-in from Molly Blades nearly 30 yards from the goal facing away from the goal. She spun, kicked the ball on a hop, and lofted it over the head of the goalkeeper to make the score 5-3.

With 5:28 remaining, Alycia Hauck made a great save to keep the lead at two. She jumped to tip a shot upward, and when it hit the crossbar, she dove to collect it and stop the Smith-Cotton attack.

A minute later, Blades fed the ball to Fronabarger from the right wing to the left. Fronabarger fired the ball in from the 18, left to right across the face of the keeper, cutting the lead to one, and setting up the wild final minutes.

Republic kept the pressure on throughout, and when Fronabarger got the ball 25 yards from the goal, she had space to make something happen. With about 40 seconds remaining, she hooked the ball toward the left post, head-high. It bounced one time as Hicks approached for the finish, but crossed out of bounds, just ahead of Hicks’s final lunge.

Republic falls to 2-2. Smith-Cotton is 7-0. The Lady Tigers are off until next week, when they host Kickapoo Wednesday.

It’s not just that Clara Fronabarger can score, it’s how she can score. Fronabarger had three goals Thursday night, and two of them were ridiculous. One, on a free kick from 30 yards out, was floated into about a nine-foot square in the upper-right corner of the net that was the only possible place for it to go through. The second was a a spin-around shot from more than 25 yards out that sailed over the goalkeeper’s head. For her hat trick, Fronabarger is our Farr Better Player of the Game.