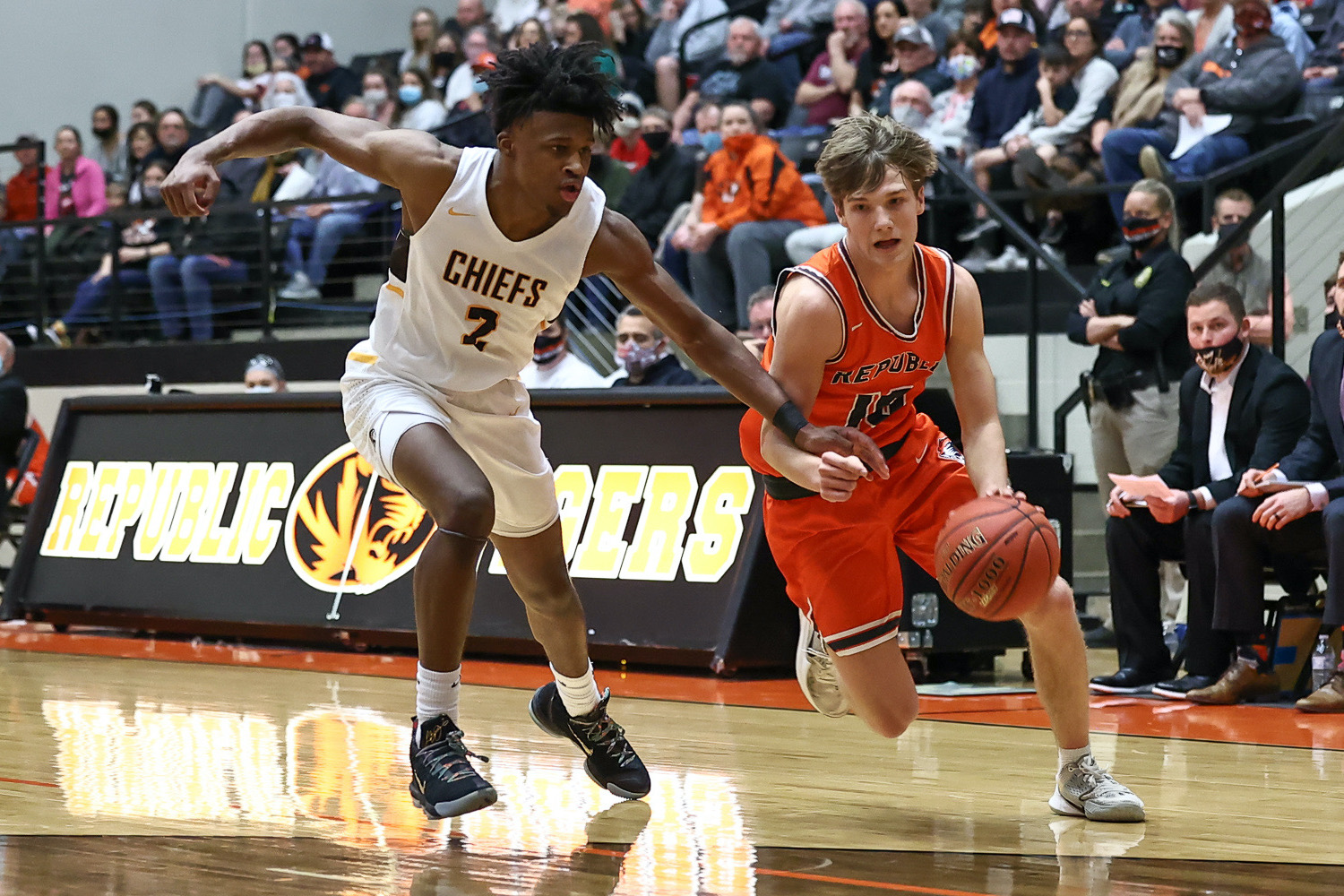 Before the start of Friday’s district championship game, Republic coach Tim Brown hoped his team’s patient style of play could break down Kickapoo’s defense, causing the Chiefs to become “disinterested” in guarding them for long stretches. The Tigers managed to control the pace of play for most of the night, but Kickapoo’s defense never broke, holding Republic to single digits in the second and third quarters, earning a 52-44 win and the Class 6 District 12 championship.

From the start, Kickapoo’s defensive focus was on shutting down Republic guard Drew McMillin, and for much of the game, the Chiefs used their length and quickness to do that. McMillin scored five points in the first quarter, but managed just one field goal during the decisive second and third quarters, partly because Kickapoo did a good job of denying him the ball.

But despite that, Republic stayed close. The Tigers trailed by one at the end of the first quarter, 16-15, and they grabbed the lead for the only time all night at 20-19. Kickapoo scored four straight points before halftime to lead 27-22, then got off to a quick start in the third quarter, stretching the lead to 33-24. But Republic whittled the nine-point lead down to six points in the final minutes, and had the ball at one point with a chance to make it a one-possession game.

With 2:46 remaining, McMillin had an open look for three after an in-bound play, but it was too long. Isaac Haney grabbed the rebound and went coast-to-coast for a layup, and Republic never had another chance to get closer than six points.

“Our guys fought. I think this group is a group that our community was proud of because of how they approach the game. They’re very team oriented. They played as hard as they could and got the most out of their ability most nights,” Brown said after the game. “And it’s a special group to me, to think about what everyone’s been through in the last year, and to get to come to practice and just be together.

“People asked what was the hardest thing (about the season) with COVID. It was keeping our guys separated because they love being together. I’ve never had as much fun as what we’ve had this year.”

Friday’s game was the final one for Republic seniors Drew McMillin, Carson Neff, Dalton Parks, Oliver Welch, and Tyson Young. Brown said the five “set the standard for our culture and our program, and all of them play different roles. It was not always easy to accept, but you’d never know it by their body language because they allowed love to win over selfishness. I told them that’s a life skill and that’s big-boy stuff. That’s being a man. And that’s what I’m most proud of about this group, and that bled over into our entire program.

Drew McMillin finishes one of the best careers in Republic history. He’s the school record-holder in three-pointers for a game, a season, and a career. He also holds the single-game scoring record at Republic, and finished with more than 1,500 career points.

Republic finished its season with a 22-5 record. Kickapoo is 24-2, and the Chiefs advance to play Nixa in the sectionals next week.