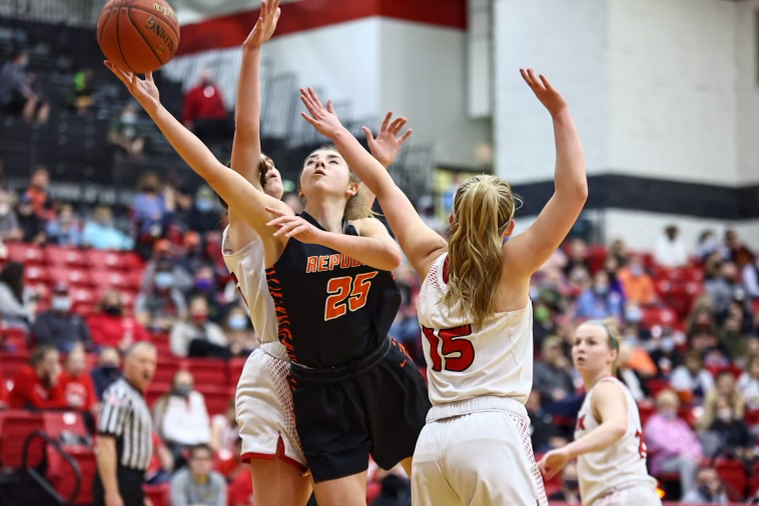 Republic’s defense stopped Ozark three times in the final minute, including on the final possession of the game, to seal a 50-47 road win and a share of the Central Ozark Conference championship Monday night. A three-point attempt by Adri Wakeman with five seconds remaining was too long, and Ozark was unable to get off another potential game-tying shot before time expired.

Republic used a balanced attack, getting 16 points from Rilynn Finley and 15 each from Savana Powell-Goodman and Kaemyn Bekemeier, to pick up its eighth win in nine league games. Republic never trailed, and although Ozark had more than one chance to tie the game in the fourth quarter, the score was never even after starting at 0-0.

Finley, a freshman who has just been in the starting lineup for about a week, started quickly to help Republic jump on top. She scored eight points in the first quarter as Republic built a 13-9 lead after one period.

“Right out of the gate, kids were doing a good job of giving (Finley) touches on the inside, then she made some really good moves and made a couple of finishes,” said coach Kris Flood. “I don’t know if she was a little bit under the radar, but she played some really good minutes tonight.”

For most of the game, Republic’s lead hovered between two and five points, occasionally stretching to seven or eight, and for a few seconds near the end of the third quarter, reaching ten points, 44-34. Ozark cut the lead to 44-36 before the quarter ended, then three straight at the beginning of the fourth quarter to get it down to four.

Republic built the lead back to eight points at 49-41, but Ozark came right back to score six straight – but never got closer. Ozark missed a layup, then missed the front end of a one-and-one while trailing by two points.

After Bekemeier made a free throw to give Republic a 50-47 lead, she and her teammates got three more defensive stops in the next minute to hold off Ozark.

The win clinches a share of the COC title for Republic, who improves to 17-7 overall and 8-1 in the conference.

“It’s a great accomplishment considering the conference, especially the top half, was pretty balanced this year, and every night, especially here at the end, has really been a battle,” Flood said. “I’m proud of the way the kids played.”

The night was a clean sweep for Republic, which also won the freshman and JV games. The freshmen ended its season with a 17-0 record, winning 33-20. The JV team got 27 points from Hope Schatz in improving to 22-0. The JV and varsity teams will both host Hollister Thursday in a final tune-up before districts.