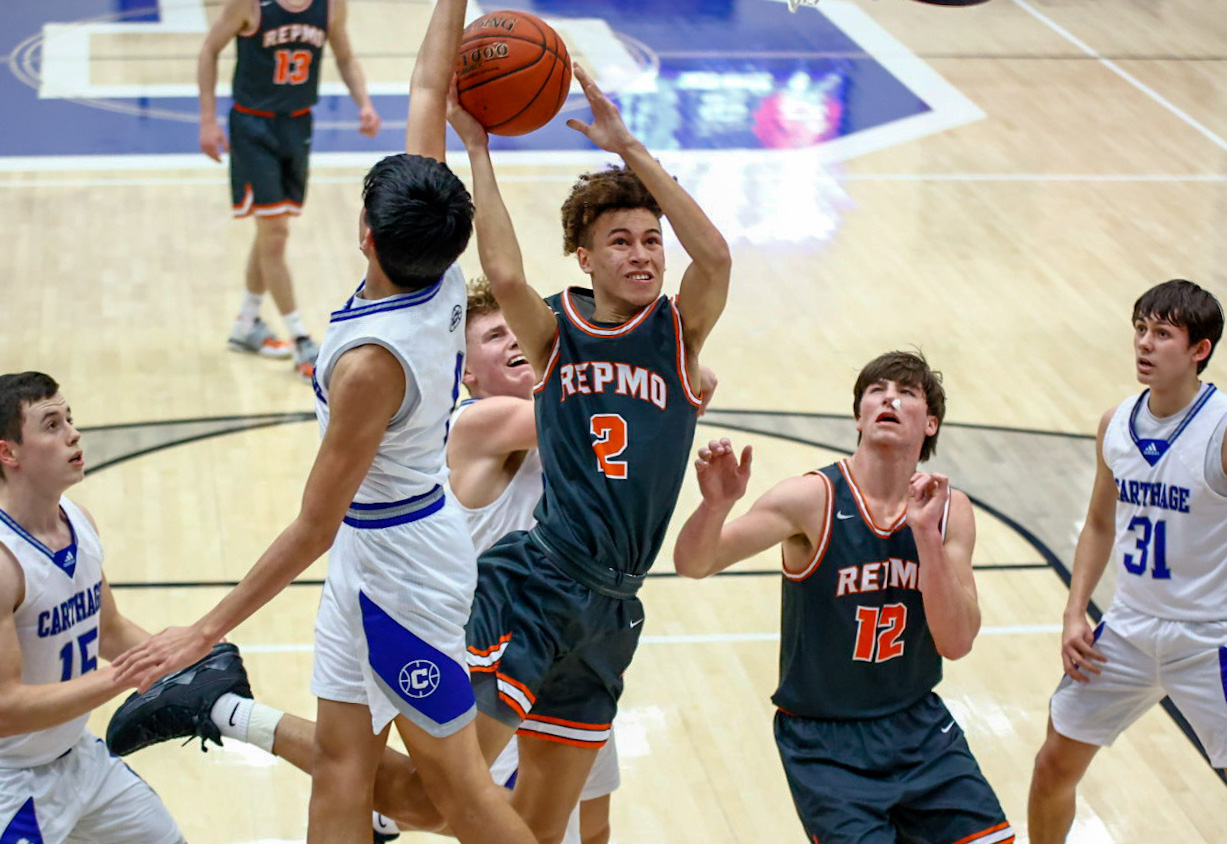 Ahlante Askew takes a shot in the lane in the second half at Carthage. He finished with nine points. (Photo by Steve Rackley / Flat Top Photos)

Carthage did almost everything it needed to do to pull off an upset Friday night, but Republic made just enough plays down the stretch to hold on for a 48-43 victory in Carthage.

Trailing by as many as 15 points in the third quarter, Carthage fought back to cut the lead to seven points as the fourth quarter began, 40-33. An 8-2 run by Carthage to start the final period cut the lead to 42-41, and they had two chances to take the lead, but Carson Neff and Ahlante Askew intercepted passes in the lane on consecutive possessions to turn Carthage away.

Oliver Welch made two free throws to put Republic up 44-41 with two minutes remaining. Carthage missed a shot at the other end, and after Ahlante Askew was fouled and sidelined with an injury, Neff stepped to the free throw line at the other end of the court and made two shots, pushing the lead to five points, 46-41 with 30 seconds remaining.

Carthage made a quick basket to cut the lead to three, then forced a five-second call on the ensuing in-bound play. Carthage’s Justin Ray took an off-balance three-pointer to tie the game with three seconds remaining, but the ball spun around the rim and flew out, and Republic got the ball back after a tie-up. Will Fronabarger sealed the win with two more free throws.

“Sometimes when you play young teams that are fighting for their culture, they’re excited to play. They had a homecoming crowd, and I didn’t feel like our guys were as excited to play as their guys were,” Brown said. “We’re not the kind of team that can just show up and win games because of who we are. We have to win games because we execute, defend, and finish plays.”

Brown said his team’s inability to finish plays, especially in the first half, let Carthage keep the game closer than it could have been.

“We had a ten-point lead, and I don’t know how many layups and easy baskets we missed in the paint,” Brown said, “and how many times we missed free throws and left points on the board.”

Republic led 16-10 at the end of the first quarter and 29-21 at halftime. The Tigers’ biggest lead was midway through the third quarter, when they led by 15 twice, the latest at 38-23.

Drew McMillin had 19 points for the Tigers. He was the only Republic player in double figures.

The Tigers are 18-2 overall and 4-0 in the Central Ozark Conference. They’ll host Willard Tuesday on a “super night,” which will include both boys and girls games.

“I will give our guys some credit, at a time when it didn’t look very good, we executed and we did what we were supposed to do for about three minutes, and that’s hard to do,” Brown said. “We’re going to be accountable for this, and they know … they’re going to be accountable. That wasn’t a great representation of what we feel like Republic basketball was for four quarters tonight, and I think we’ll be better on Tuesday because of it.”

Carson Neff won’t have his name all over the box score of this game, but his fingerprints are all over the victory. Neff made two of the biggest plays of the night, one on each end of the floor. When Carthage had closed to within a point and had a chance to take the lead, Neff intercepted a pass in the lane that was bound for an open Carthage player on the block, turning Carthage away. A little later, he stepped to the free throw line and made two free throws to give Republic a two-possession lead again. For his big plays in big situations, Neff is our Farr Better Play of the Game.