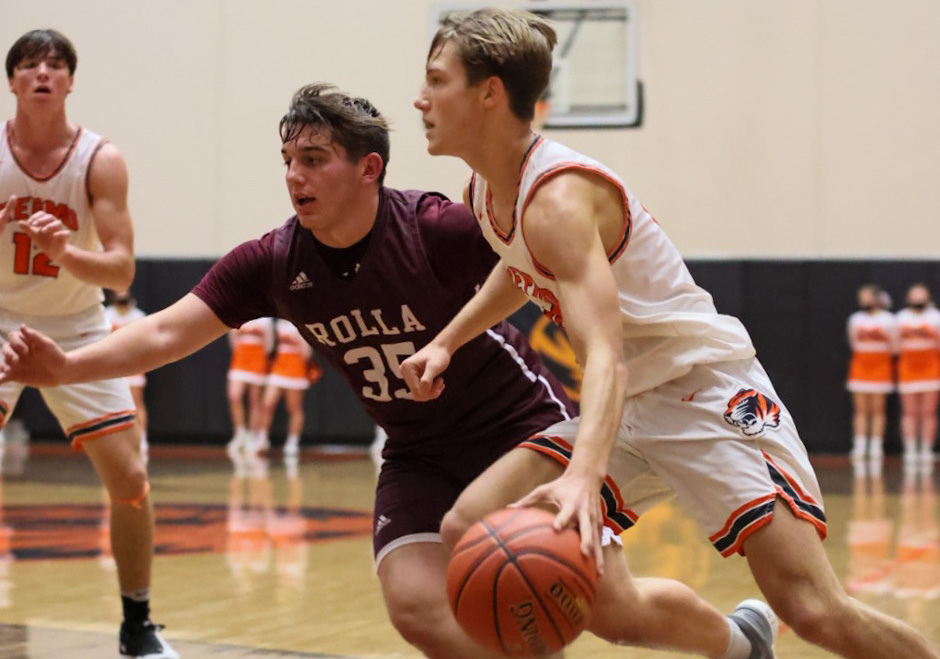 Drew McMillin drives around a defender in the first half. He led Republic with 24 points. (Photo by Steve Rackley / Flat Top Photos)

For the second game in a row, the Tigers took a while to get started, then roared to live. Republic fell behind 7-0, but outscored Rolla 18-6 over the rest of the first quarter on their way to a 66-59 win at home Friday. Four three-pointers in the first quarter – two by Ahlante Askew and two by Drew McMillin – sparked the Tigers’ rally. The two Tiger guards combined for 46 points.

Rolla confounded Republic in the opening minutes with a zone defense, but the four Tiger treys forced the Bulldogs back into a man-to-man, and Republic’s offensive quickness gave it an advantage. The Tigers outscored Rolla 13-9 in the second quarter and took a 31-22 lead into the halftime break.

“We knew that they do a lot of weird things on defense, like they’ll switch every other possession… from zone to man. So we really found sets that would work for both, so we didn’t have to worry about that,” said McMillin.

The Tigers dissected Rolla’s defense at times with precision passing, including one fast break that featured back-to-back no-look passes – from McMillin to Askew, then from Askew to Avery Moody, who finished with a layup. Moody finished in double digits with a career-high 12 points.

Early in the second half, Rolla clawed its way back into contention, cutting an 11-point Republic lead down to four points at 35-31. But that was as close as the Bulldogs would get all night, and the Tigers reeled off ten consecutive points to push the lead to 14. Rolla got within six points early in the fourth quarter before the Tigers extended the margin back to double digits, where it stayed most of the night.

Republic improved to 3-0 and earned a spot in the championship game of the Republic Invitational Saturday. The Tigers will meet Parkview, who edged Ozark and Rogersville in pool play to earn its championship berth. That game is scheduled for 3 pm.

The third-place game at 1:30 will feature Ozark and Rolla. Ozark came from behind to beat Rogersville in their Friday night game. Rogersville (0-2) will play Glendale (0-2) for fifth place at noon.