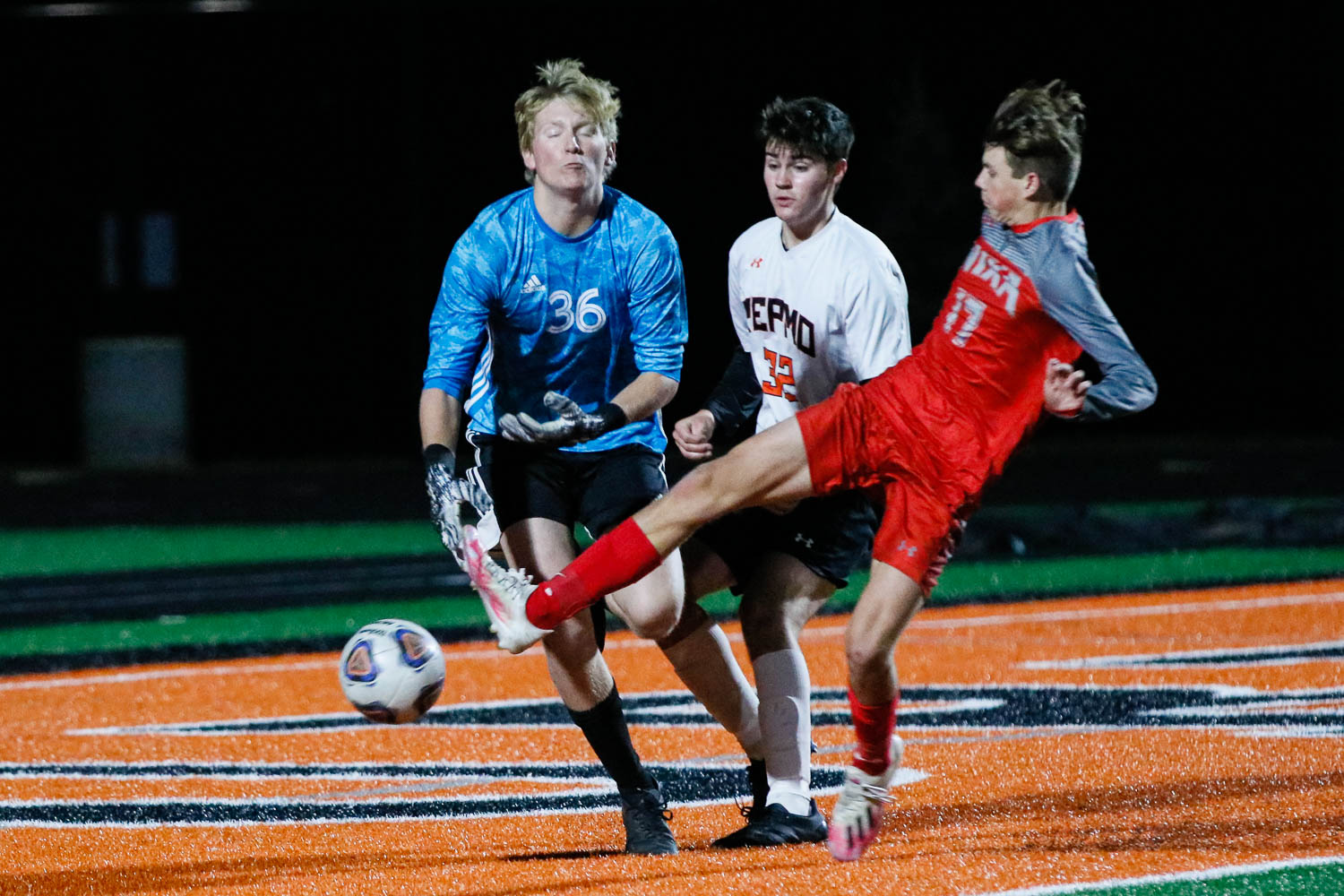 Goalkeeper Drake Lightfoot goes for a ball during a second-half attack by Nixa.

As the soccer Tigers came off the field at halftime of the district championship game, leading Nixa 1-0, coach Kevin Hauck had a message for them: “Take a deep breath. That’s just the first 40 minutes. You’re about to get into the biggest dogfight of your life, and you’re going to have to be ready for it.”

It took more than 20 minutes, but the Eagles eventually did take the fight to the Tigers, scoring two goals in eight minutes to come from behind and win the district championship with a 2-1 victory on Republic’s turf. Andrew Butler scored the game-winner for Nixa in the 63rd minute, hitting the crossbar with a shot that deflected into the net.

The second half was a stark reversal from the first 40 minutes, when both teams had scoring opportunities, but the Tigers, on balance, beat the Eagles to the ball and pushed the ball forward to pepper Nixa’s defense with shots.

“I thought we had a good game plan and we came out and played extremely well. We moved the ball and created a lot of opportunities,” said coach Kevin Hauck.

That pressure paid off when Marco Donjuan put the Tigers ahead in the 25th minute. On a corner kick by Philip Mason, Will Fronabarger re-directed the ball back to Donjuan in the middle. Donjuan wound up and fired a shot past the Nixa keeper, giving Republic a 1-0 lead.

For the next three minutes, Republic’s built on that momentum to push the ball upfield again. The best chance came a minute and a half later, when Republic had multiple chances in the box but couldn’t convert. A Luke McDonnell shot sailed wide left to end the threat and give Nixa a goal kick.

Nixa had come closest to scoring in the 16th minute, firing a shot that hit the crossbar and went high. Republic goalkeeper had to make a diving stop on another shot in the 18th minute.

“I was hoping for another (goal) in the first half, and we had our chances to be able to do that. And it makes a difference whenever you’re not finishing on good opportunities that you have, especially in tight games against good teams,” Hauck said. “But we played an extremely good first half, and I thought we did some things better that first half than we’ve done all season.”

The first 20 minutes of the second half was more like the opening minutes of a prizefight, with each team feeling out the other but failing to go on the attack. Republic did have one good opportunity after a Brayden Tharp takeaway near midfield, but a shot by Mason sailed wide right.

From that time on, Nixa stepped up its pressure and played like a top seed. The Eagles scored their first goal on a corner kick in the 62nd minute. Two minutes later, they had a shot on an open goal, but missed wide left. Lightfoot had to make another save in the 68th minute, but after Republic failed to clear the ball during a Nixa attack in the 70th minute, Butler fired his game-winning shot.

“I think we were playing maybe a little bit tight. That first half, we were pretty loose,” Hauck said. “We were winning a lot of 50/50s. In the second half, I felt like we didn’t win as many 50/50s. I don’t know if we just ran out of steam a lot earlier, (or) we just weren’t able to withstand their pressure. They put a lot more pressure (on us) the second half, but I thought it was because we weren’t able to win the ball early on.”

Republic’s one last opportunity came with about three minutes remaining. Brayden Tharp fired a hard shot from about 25 yards out. It bounded off Nixa’s goalkeeper, but the Tigers were unable to take advantage.

The 2-1 win puts Nixa in the state sectionals Saturday against Ozark, and ends a Republic season that had begun with five straight losses, but ended with the Tigers winning 12 of their last 16 games.

“I’m a little bit emotional, just because of the fact that it was a good season,” Hauck said. “Starting (0-5), to turn it around, it’s pretty special. These seniors are special, so it was a tough one.”