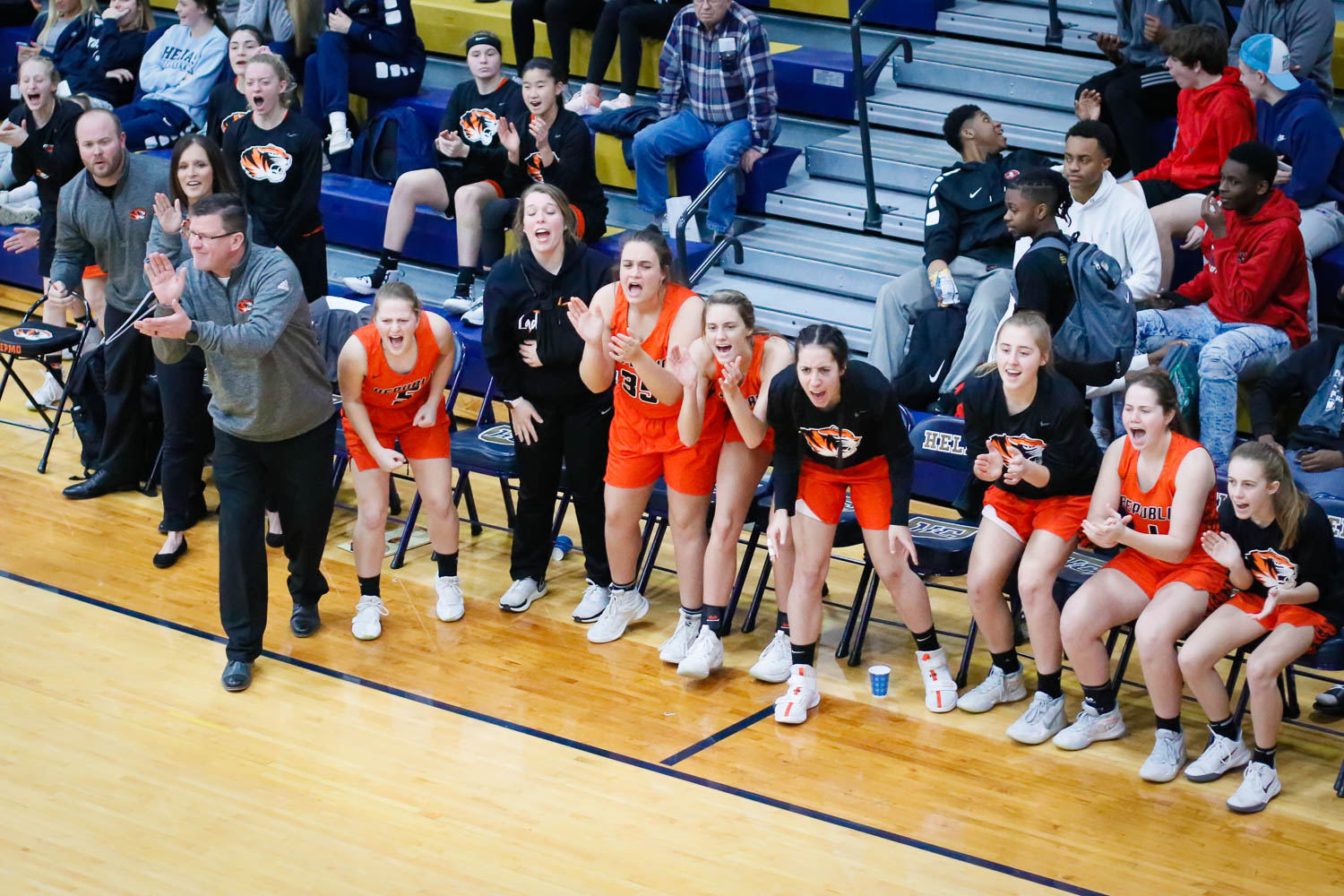 The Republic bench reacts to one of the team’s nine second-half three-pointers in a comeback win over Jefferson City.

Freshman Kaemyn Bekemeier peppered state-ranked Jefferson City with shots all day long in the best game of her career. But it was a 35-foot bomb dropped by Savana Powell-Goodman that flattened Missouri’s #3 team in Class 5.

Powell-Goodman tracked down a loose ball near half court, realized the clock was winding down, and let loose a high, arching jumper that swished the net with less than a second remaining. The shot gave Republic an improbable comeback win against one of the best teams in Missouri, 60-57.

Bekemeier finished with a career-high 29 points. She scored 12 in the first quarter alone, keeping Republic close when Jefferson City was threatening to run away with the game early. And she was 7-for-7 from the free throw line in the second half, helping put Republic in a position to win on its last possession.

When the second half began, it seemed the Lady Tigers might be playing for pride. After Jefferson City scored the first bucket of the third quarter, Republic found itself in a 14-point hole. They had trailed by as many as 15 late in the second quarter.

But from that point on, Republic let loose a flurry of three-pointers. The Lady Tigers ended up tying a school record with 13 for the game, including nine in the second half.

Delaney Smith, Jazzy Kirby, and Bekemeier fired off three consecutive threes to shoot Republic back into the game. Bekemeier followed that up with a conventional three-point play to cut the lead to four points in a couple of minutes. After Jefferson City ended its scoring drought with a bucket, Jade Kirby stepped up and made another three pointer. This one pulled the Lady Tigers to within one.

Jade Kirby evened the score before Jefferson City scored four straight points. But Republic finished the third quarter with six more consecutive points, and when Kirby hit a layup ahead of the third-quarter buzzer, Republic led for the first time since the opening minute.

In the fourth quarter, three more treys — one by Bekemeier and two by Jazzy Kirby — put the Lady Tigers on top 55-51. But in the final minute, Jefferson City scored, stole the ball, and made another layup to tie the game at 57. Republic broke the Jefferson City pressure to get the ball into the frontcourt, and Kris Flood called time out to set up Powell-Goodman’s heroics.

The Lady Jays got the ball with .3 seconds remaining, but Carle Ward deflected an attempted full-court pass and time expired before Jefferson City could get a shot off.

“Everybody contributed. It was just a heck of an effort,” said coach Kris Flood. “It’s a good win for the program. I think they’re kind of starting to … realize what they’re going to have to do night in, night out. They’re going to have to play hard and play hard defensively. The offense is clicking a little bit better, so maybe we’re starting to hit our stride now as we hit February.”

The Lady Jays had controlled the first half with their superior size and surprising quickness. Jefferson City beat Republic down the floor for several transition layups in building a 15-point lead in the second quarter.

A three-pointer by Kaitlyn Ragsdale just before the halftime buzzer set the stage for Republic’s second-half comeback.

“Rags hitting that shot right before half cut it from 15 to 12. I think it shot a little momentum into us, and at halftime, they had a little more pep in their step,” said coach Kris Flood. “Then bam, we just came out and we finally shot the ball like I thought we were capable of the whole time.”

After trailing 34-22 at halftime, Republic outscored Jeff City 24-10 in the third quarter. The Lady Tigers outscored the Lady Jays 14-13 in the final quarter.