All those school records belonged to past Tigers on Thursday. They all belong to Jerney Jones tonight.

Jones romped to the best individual game performance by anyone in Republic history, rushing for 417 yards and seven touchdowns to lead the Tigers to a district semifinal win over Glendale, 71-34.

Those weren’t the only records to fall. Republic’s 71 points were the Tigers’ most-ever. Their 619 rushing yards were not only a school record, but the 6th highest single-game total in Missouri history.

Jones even accomplished the absurd feat of scoring two touchdowns while the same train was passing the stadium.

“Jerney Jones is just Jerney Jones,” says coach Wes Beachler. “(I’m) still trying to find a way to medical redshirt him for one more year, and I don’t think it’s going to work.”

Jones did much of his damage out of a new wrinkle in the Republic offense, lining up and taking a direct snap from center Garrett Presnall. He racked up at least half of his yardage in that formation.

“We put it in after the Nixa game, in case (Riley) Watkins’ wrist wasn’t really healed and it was something we’d have to go to to give him a blow,” says Beachler. “We’d  run it last year some, too. When we put it in, the more film we watched of their defense, the more we thought, ‘This is something that might cause them some problems with what they do defensively.’

“The beauty of what we do is we can change a lot in the backfield and a lot in the formation, and the offensive line stays the same. So it’s not a big change for the guys up front, and it’s just an opportunity to get the ball to Jerney in a different fashion,” Beachler says. “If something’s working, we’re going to make you stop it. Then if you make an adjustment to stop it, we have a counter play off of that, and that was the (play) he scored on later. That was just a case (that) it was working well and we didn’t see anything that they were doing to stop us, so we just kept running it.”

For the second year in a row, Glendale hung with Republic early, only to be out-muscled and out-hustled as the game wore on. But the first big series of the game came from the Republic defense, who forced Glendale to punt from deep in its own territory on its first possession, after the Falcons had won the pre-game coin toss and elected to receive the ball.

Yocum Automotive Drive of the Game 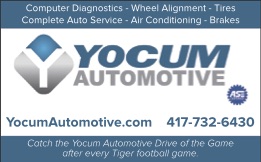 The Tigers scored so often and so quickly that most of their scoring “drives” could hardly be called drives at all. But one possession in the 2nd quarter lasted seven plays and nearly three minutes. It happened after Glendale had cut Republic’s lead to 35-22, and it ended on a 25-yard touchdown run by Jerney Jones. A two-point conversion by Riley Watkins topped it off, stretching the lead to 43-22 and making it the Yocum Automotive Drive of the Game.

Be listening to our broadcast for the Yocum Automotive Drive of the Game! Every week, Rich Miles and David Brazeal will choose the key drive that makes the difference in the outcome.

Republic responded immediately, giving the ball to Jones and watching him fly past the Glendale defense on the first play from scrimmage. Jones cruised 44 yards to make it 7-0 Tigers.

Both defenses got a stop on the next two possessions, then Republic’s Devon Ward picked up a fumble to snuff out the third Glendale drive of the game, setting up another Republic touchdown–this one by Bobby Finley. Finley took the ball from the wingback position and ran around the left end, bolting 42 yards down the sideline for a touchdown. The Tigers went for two on the extra point and failed to convert, and the score was 13-0.

Glendale finally got on the board on its next possession, and a two-point conversion made it 13-8. But Republic was just getting warmed up.

Glendale answered with another scoring drive, cutting the lead to 28-14, but two plays later the Tigers were back in the end zone. This time is was Jones going 65 yards to make it 35-14.

The Falcons caught a break on the ensuing kickoff, letting the ball bounce between two return men all the way back to the five yard line. But Reuben Lopez picked it up and zig-zagged through the Republic coverage all the way to the end zone, making it 35-22.

The next drive — taking a whopping seven plays and lasting over 2 1/2 minutes — was one of the longest of the night for Republic. It ended when Jones scampered another 25 yards into the end zone, and a two-point conversion pushed the lead to 43-22.

Not content to sit on the lead, the Tigers tried a bit of trickery. Blake Messier recovered an onside kick to give Republic the ball back, and one play later, Jones romped 34 yards on a direct-snap play to give Republic an even 50 points. A late score by Glendale made it 50-28 at half.

In the third quarter, Jones picked up where he left off, rushing for 65 yards to the end zone on the first play of the Tigers’ second drive. That made it 57-28.

Glendale threatened on their next possession, and had the ball inside the five-yard line when defensive Devon Ward came up big. Ward appeared to injure himself while attempting to cover a Glendale receiver on 2nd down. He came up limping, and Glendale quarterback Alex Huston tried to pick on him the very next play. But Ward shook off the injury, stepped in front of the pass at the goal line, and jetted 100 yards in the other direction for a defensive touchdown, giving Republic a 64-28 advantage.

Glendale later cut the lead to 64-34, but Republic capped off the scoring with a 65-yard drive that ended on a David Feil three-yard touchdown run.

Feil, in fact, had one of his best career games, even though he was overshadowed by Jones. Feil rushed for 128 yards and one touchdown on just 11 carries. Bobby Finley also had a career night, running for 65 yards on five carries.

Beachler says the offensive line played a big role in the success of the running backs, and so did the scout-team defense, which was charged with simulating the fast-paced Glendale offense during practice over the past week.

“(It was) a lot of film breakdown for the offensive staff and for the offensive linemen themselves, and a great look by our scout team defense,” Beachler says. “By the end of the week, I was telling our scout team defense, ‘You call their stunts and we’re going to run the ball.’ So we didn’t know what was coming either. We had Ethan Waltz and Brandon Miller back there calling their defensive stunts because the kids had run it all week so well. I think our scout team deserves a lot of credit, and also our offensive line deserves a lot of credit for picking up their stunts and their loops.”

Defensively, the Tigers allowed Glendale to rack up yardage, but it didn’t translate into points like it usually does for the Falcons. Glendale had 623 total yards–543 in the air.

“I thought the (defensive) game plan was solid,” Beachler says. “We had some mishaps early. Our scout team did a good job in practice, but that’s something you’re not ready for until you see it full speed. They had a kick return (for a touchdown), so we held them basically under 30 points, so I’ll take that against a team like that.”

The victory in the district semifinals sets up a rematch with Central Ozark Conference rival Nixa, who beat Parkview to advance to the district championship game. The Tigers will host Nixa next Friday night.

Kickoff is scheduled for 7 p.m. We’ll have the Hines Street Pharmacy Pre-game Show at 6:45, followed by play-by-play presented by CoxHealth at 7:00.