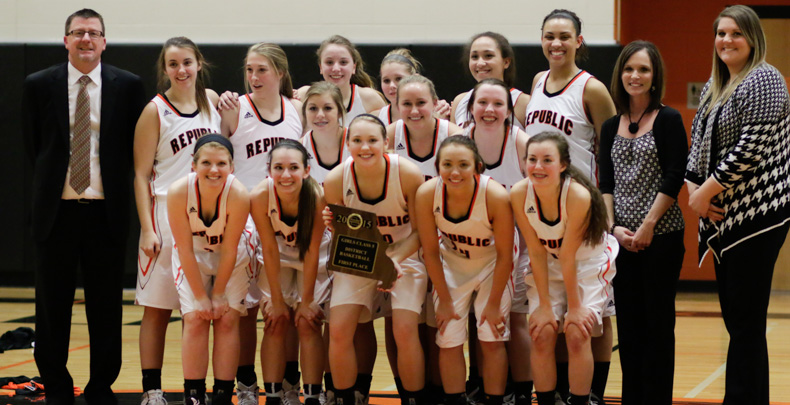 When the game came down to the wire, the Lady Tigers just refused to lose. Republic fought back from a halftime deficit and outscored Nixa 24-11 in the final quarter to capture a district championship with a 60-46 victory Friday. Brooke Stanfield scored 26 points to lead the way for Republic, who advances to the sectional round of the playoffs against Springfield Kickapoo next Wednesday.

Unlike the first meeting between Nixa and Republic, the Lady Tigers struggled early, unable to generate much offense. Nixa led 11-7 after one quarter, and had a chance to stretch the lead to five at the end of the half before Tori Taylor stole a pass to give Republic one last chance to score before halftime.

“Give Nixa a ton of credit. Coach Perryman had a really nice game plan for us. We didn’t get hardly anything from the perimeter,” says coach Kris Flood. “They did a really good job on us defensively and had us pretty frustrated. We weren’t playing with a lot of confidence there, and we were just fortunate enough that we were able to stay in it at halftime.”

After Taylor’s steal, Jordan Kabetske hit a jumper from just inside the three-point arc as time expired to cut the lead to one point, 19-18.

The teams went back and forth again in the third quarter, with four lead changes. Heading into the final quarter, the Lady Tigers led by one point.

From there, it was all Lady Tigers. Republic took the ball to the hoop, drawing fouls and hitting free throws down the stretch. They also dominated the offensive boards in the fourth quarter–especially senior Micah Mansker, who pulled down four offensive boards on three possessions during one stretch, scoring five quick points to help cushion Republic’s lead.

In all, the Lady Tigers made 30 free throws. Kabetske and Stanfield each made seven in the fourth quarter alone to put the game away.

“Brooke (Stanfield) played phenomenal. She did a lot of great things,” says Flood. “She was always right around the ball and had some really key finishes when we needed it.”

The Lady Tigers’ defense also played a key role in the win, with Jade Sawyer and Kabetske teaming up to hold Nixa’s leading scorer, Toshua Leavitt, to only 11 points. At times in the second half, Leavitt’s frustration at being held in check was visible.

“I thought the whole group played hard for 32 minutes,” Flood says. “Even though we struggled in the first half, it wasn’t because of our effort. Nixa had a lot to do with that.”

The Grace Place Player of the Game is Brooke Stanfield! She scored 26 points, including 19 in the second half, to help Republic pull away from Nixa down the stretch.

Republic advances to the sectionals next Wednesday at Drury’s O’Reilly Family Event Center. They’ll meet Kickapoo for the third time this season, having split the first two games. The two played at Drury during the Pink and White Tournament, and Kickapoo won that game in double overtime. Republic won at Kickapoo earlier in the year.