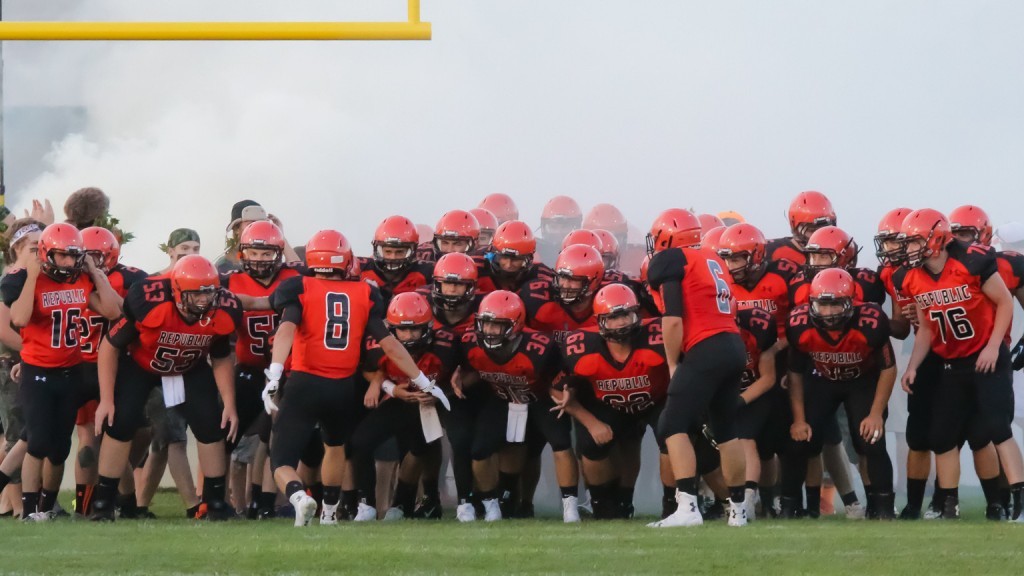 The Republic offense scored quickly, it scored often, and it didn’t stop scoring until the game was in control, as the Tigers erased a decade of frustration with a dominating 64-22 win over Ozark Friday night. (See more than 130 photos in our gallery. Or listen to the full game.)

Republic hadn’t beaten Ozark in ten years, but they made up for lost time Friday night. In the first half, the Tigers seemed to score almost as soon as they touched the ball. They scored eight touchdowns in the first half on only nine possessions.

Republic’s defense got a stop on Ozark’s first possession of the night, and Republic went 58 yards in five plays, scoring on a Jake Smith eight-yard run. The drive lasted nearly two minutes, and that ended up being one of their longest scoring drives of the night.

Ozark answered again on a two-yard run by Micah Tinsman, and that’s when Republic put the game away against a helpless Ozark defense.

Tryston Ellison scampered 95 yards on a kickoff return to make the score 22-15. Jake Smith ran for 48 yards on the next possession to make it 29-15 as the 1st quarter ended.

Yocum Automotive Drive of the Game

When a team scores eight touchdowns in the first half, it’s not easy to pick a “drive of the game.” But we went with the Tigers’ opening drive, when they took it 58 yards in five plays, and scored on an eight-yard run by quarterback Jake Smith. It was clear from that drive that Ozak would have trouble stopping the Republic offense, and the opening drive set the tone for the rest of the night.

Jerney Jones caught a pass from Jake Smith and went 61 yards to paydirt. It was 50-15.

It was only halftime.

In the locker room, quarterback Jake Smith told his teammates not to let up.

“I just encouraged everyone to keep playing their hardest,” Smith said. “You never know what could happen.”

Jack Hayes took the opening kickoff of the 2nd half and went 68 yards, setting up a three-yard run by Jerney Jones to make it 64-15. That’s when Republic finally took the foot off the gas pedal.

Ozark scored once more in the 3rd quarter, and Republic eventually ran out the clock to take the win. It was the first win over Ozark in 10 years for Republic.

Despite the lopsided score, Ozark actually outgained Republic in total yardage, 418 to 414. Ozark was led by Caleb Essick, who racked up 259 all-purpose yards.

Jake Smith’s father, assistant coach Todd Smith, said seeing the drought end with his son at quarterback made the night even better.

“I’d be lying to you if I said it wasn’t really, really special. has kind of grown up with understanding the significance of the Ozark/Republic rivalry after watching me coach against them for several years and being on the sidelines from a very young age. It was a pretty special night for me.”

To head coach Wes Beachler, the win is the culmination of a lot of hard work.

“The biggest thing for me is I thought it was a complete game–the first truly complete game from start to finish in our program since I’ve been here,” he said.

Republic welcomes top-ranked Webb City to town next Friday for a COC matchup.