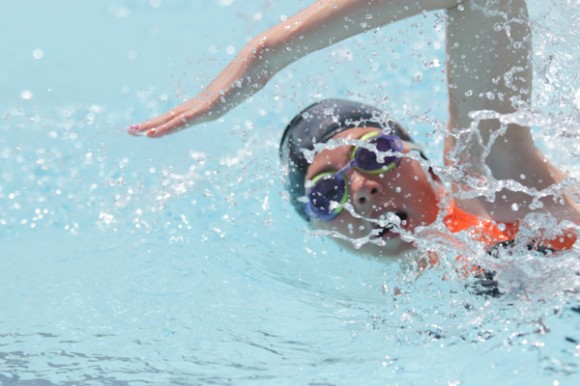 More and more Republic kids are hanging out at the Republic Aquatic Center without spending time on the high dive or in the play area. Instead, they’re part of Republic’s growing competitive swim team, the Tiger Sharks.

More than 80 swimmers are members of the Tiger Sharks this year, up from 70 last summer. Dixie Curtis, in her seventh year as coach, says the team’s growth tracks closely with its growing popularity among younger swimmers.

“In 2007, we had maybe 15 swimmers,” she says. “It’s slowly getting bigger and we’re getting more little kids. That’s the key. The little kids, they just more want to make it across, more than beating people.

“As they get older, they get more competitive. Usually they’re swimming against the same people every year, so it’s more of a competition because they want to beat them. But as you get seven, eight and up, it’s all about racing. That’s what we want them to do. It is a competitive sport, an individual sport, so we want to get them more competitive.”

Around 100 swimmers participated in the Tiger Sharks’ lone home meet of the summer, including about 70 from Republic. The quality of the team’s facility at the Republic Aquatic Center also plays a role in the sport’s local growth.

“We’re lucky to have a summer team. We’re lucky enough to have an awesome pool, because this is a standard 25-foot pool. And this is a public pool, so anyone who wants to can be on the team,” Curtis says.

See full the photo album from the Tiger Sharks’ home meet here. Feel free to share them or tag them.

“I’d like to see them get a high school team. That’s our ultimate goal. I swam in high school, I loved it,” she says. “It’s a good sport. It’s in-between the other sports, so it kind of gives them a break so they’re still getting in the water, getting exercise, getting physically fit.”

Until then, Curtis has advice for parents who are thinking about getting their kids in the water.

“Start them early. They learn to love it. They’re really excited to come swim and they love swimming,” she says. “It’s a good family activity, and you can get all the family members together and get them out watching.”

Download results from the Tiger Sharks’ home meet on 6/20.